Chhota Bheem And The Curse Of Damyaan Review 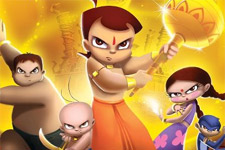 Nupur Barua / fullhyd.com
EDITOR RATING
6.0
Performances
Script
Music/Soundtrack
Visuals
6.0
5.0
5.0
4.0
Suggestions
Can watch again
No
Good for kids
Yes
Good for dates
No
Wait for OTT
Yes
In a recent interview, Rajiv Chilaka, managing director of Green Gold, and the creator, producer and director of Pogo's Chhota Bheem series, said, "I don't think IPL is as popular as Chhota Bheem". And he is not exaggerating.

Chhota Bheem is a super-hit animation series, and has not only taken home a few awards, but also made available comic books and merchandise. Now, in an effort to make the character larger than life, the makers decided to produce a movie, hoping to make the little strong boy more popular.

Chhota Bheem And The Curse Of Damyaan begins with a hissing voice, emanating from the underground, telling his serpent cronies to find a pure-hearted king who can release the above-mentioned voice from its 1,000-year curse. And who can be a better king than Indravarma of Dholakpur?

So these serpents assume human forms, and the leader befriends the king. He tells the monarch that there is a city of gold, Sonapur, that is buried in the desert, and that they should go and look for it.

So the royal Indravarma sets out with his army and his trusted advisors - a group of pre-teen kids led by Chhota Bheem. The little boy with extraordinary strength, who depends on laddoos to boost his energy, is suspicious of the king's slimy new friend, but he remains loyal to the king, and goes along with whatever he says.

Once Indravarma has unearthed the city, out comes Damyaan, an ichchadhaari naag, who oppressed and ruled the citizens of the once-splendid kingdom a 1,000 years ago.

As far as stories go, this one is a classic case of good versus evil, with the former triumphing over the latter. The added masala is the time travel and the magic, and this may be a little complicated for younger minds. The makers have simplified the story as much as possible, but there are times when the plot drags on and on.

The 2D animation is not the best you have seen, but the makers must have guessed that it does not matter to their target audience. There are some sequences where close-ups lead to highly pixelated images, that can become a bit jarring. The art is typical of the 2D animation features on television, and therefore, familiar territory to be explored.

The music is hummable, and the songs, sung by Shaan, may become a hit with children. The actors voicing the characters are decent, if a bit shrill at times.

Given the relatively poor quality of the visuals, it is best to avoid watching Chhota Bheem And The Curse Of Daamyan on the big screen. Wait for it to release on DVD, and till then, indulge your child with reruns of the Chhota Bheem series on Pogo.
Share. Save. Connect.
Tweet
CHHOTA BHEEM AND THE... SNAPSHOT
CHHOTA BHEEM AND THE CURSE OF DAMYAAN SNAPSHOT 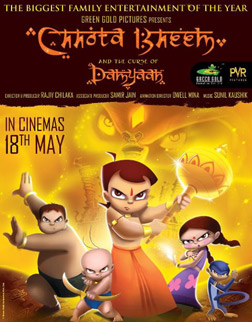 ADVERTISEMENT
This page was tagged for
chota bheem damyaan movie in hindi
chhota bheem movie curse of damyaan download
Chota bheem carus of dhamyan movie downlod
chhota bheem and the curse of damyaan movie in hindi free download
Choota bheem aur damyaan download
Follow @fullhyderabad
Follow fullhyd.com on
About Hyderabad
The Hyderabad Community
Improve fullhyd.com
More
Our Other Local Guides
Our other sites
© Copyright 1999-2009 LRR Technologies (Hyderabad), Pvt Ltd. All rights reserved. fullhyd, fullhyderabad, Welcome To The Neighbourhood are trademarks of LRR Technologies (Hyderabad) Pvt Ltd. The textual, graphic, audio and audiovisual material in this site is protected by copyright law. You may not copy, distribute, or use this material except as necessary for your personal, non-commercial use. Any trademarks are the properties of their respective owners. More on Hyderabad, India. Jobs in Hyderabad.