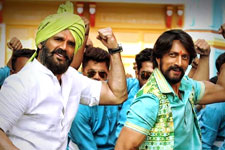 T J Reddy / fullhyd.com
EDITOR RATING
3.0
Performances
Script
Music/Soundtrack
Visuals
5.0
2.0
2.0
2.0
Suggestions
Can watch again
No
Good for kids
No
Good for dates
No
Wait for OTT
Yes
One hundred and one years ago, Max Planck won the Nobel Prize in Physics for his discovery of energy quanta. Soon after, the German scientist was invited to conduct lectures at every prestigious university Europe had on offer. Planck made his way across Europe with his chauffeur. Every time Planck got up on stage and delivered a lecture, his chauffeur sat in the back of the room and listened to it.

A few trips later, the latter made the former an exciting proposition. The chauffeur asked Planck if he could deliver the lecture as he had it by heart after listening to it on a nightly basis. Planck found this proposition intriguing and dressed up as the chauffeur when the duo visited their next university. Planck sat in the crowd while his chauffeur delivered the lecture with no hiccups. After the speech was complete, a person in the audience stood up and posed a question. After patiently listening to said question, the pretend physicist responded by saying, "Sir, I thought this was a university of higher learning filled with smart people. Your question is so elementary that my chauffeur, who is a member of the audience today, can answer it for you."

Pailwaan follows the life and times of Krishna aka Kichcha (Sudeep), an orphan turned wrestler turned boxer. The plot follows his transition through these three stages of his life. Aiding this transition are the fatherly Sarkar (Suniel Shetty) and nameless boxing coach (Sharath Lohitashwa).

Krishna's story mirrors the stories told in Sipayi, Sultan, Suryavamsam, Million Dollar Baby, Kick and a few other movies. However, Krishna's story has none of the elements that made the other stories special. That's because movies don't exist in a vacuum.

Take the relationship between Sarkar and Krishna as an example. A dynamic inspired by the rapport shared between Shiva and Ustad Shankarappa from the 1996 Kannada classic, Sipayi (a film with a Chiranjeevi cameo we highly recommend). Ustad and Shiva's chemistry feels lived in even though we never see a flashback sequence establishing how they met. The audience is made privy to their chemistry based on their choices and actions. Shiva's respect for his teacher trumps his destructive anger. This respect is put to the test when Shiva and the village itself are subject to a moral problem. While Shiva stands on the right side of the moral equation, he is rendered unable to act as he can't allow himself to cross Ustad's decree. Ustad is himself bound by his village's laws. Shiva and Ustad, both flawed characters, are compromised at this juncture.

Now, let's compare that to Pailwaan. Here, we see the familial bond shared between Krishna and Sarkar. But this bond is built on shaky grounds simply because Sarkar's liking of Krishna comes as a result of the latter's pure-hearted actions. Krishna is a fully formed, god-like individual who has nothing to learn (except wrestling) from Sarkar. This style of characterization is the equivalent of an engineering college that accepts only EAMCET toppers and boasts about how it produces the best engineers. The toppers were going to be toppers regardless. An actual test of the college's mettle would be enrolling a bunch of struggling students and helping them ace their examinations.

This phenomenon of cherry-picking by standing on the shoulders of giants continues through every plot point in the film. Take Krishna's dream of earning money to educate the poor. Krishna helps the poor by fighting local goons for bread as a kid, and is fighting boxers for the big bucks as an adult. What has he learnt through his years of existence? Nothing, because he was perfect all along. Now contrast that with Kalyan's character arc in Kick.

Kalyan is a selfish, albeit a funny, young man who cares about achieving his next high and not much else. His journey leads him to help sick children. He justifies his action by saying helping others reach their "kick" is the best "kick" one could ask for. His good deed isn't unselfish. He wants to earn his high by helping others for once. Kalyan grows as a person by channelling his flaw to produce a positive outcome. Flawless characters usually make for flat and dull cinematic experiences simply because no tangible journey results in no substantial audience investment.

When the journey is as dull as driving through a plateau, the people taking us on said journey become its saving grace. To their credit, Sudeep and Suniel Shetty put in a substantial shift and will their characters into being somewhat likeable. The likability is a more a testament to their acting abilities than to the script itself. Pailwaan allows Sudeep to flex his acting chops in addition to his muscles. He smiles, snarls, scowls, and screams a performance that has no business being in this unambitious film.

When not distracted by Sudeep and Shetty, you are asked to focus on the many ancillary characters in the movie. We have a boxing coach who wears nothing but tracksuits throughout the movie because how else would people realize he is a coach. We have a comic relief character that gets routinely slapped by our hero because hitting one's friends is funny. We have two bad guys who were picked straight out of a cartoon, and a female lead whose character hurt us more than all the others.

Aakanksha Singh plays a woman who begins the film by saying "Daddy knows best" and ends the movie by accepting "Hubby knows best." She is the daughter of a businessman who has a college education and does not take up a job after her husband and she flee an arranged marriage. She neither takes up a job nor does any of the household work. All she has to worry about is the possibility of her husband forgetting her birthday or their wedding anniversary. However, we know that he won't do either of those things. He will also cook and clean for her because he is the ideal man, and she is the perfect eye candy. She is a woman who can both look great in a saree and have the skills required to dance in an item number — que the dialogues about culture and tradition.

A movie like Pailwaan, which has the reach of its leading man, could have had this woman support her family by taking up a job. This narrative choice would, in turn, aid the hordes of Sudeep fans in understanding that a woman's place is not only in the kitchen. A concept as simple as this one was handled better in the much-memed Suryavamsam. When we tout Suryavamsam as a bastion of progressive ideas, we are well and truly scraping the bottom of the barrel.

Bargain-basement ideas continue with director Krishna's choice of using green screen and CGI for the most basic of shots. Why, we ask, was CGI used to insert artificial crowds and a fake moon? Is it because the real groups, when used, seemed to be as enthused as they would be when watching paint dry? Or is it because the fight choreography had no technical prowess powering it? Pailwaan has Krishna take his boxing stance while having his fists a mile away from his chin. He would have to use his boxing fee to fix his dismantled jaw well before he helps impoverished children. And the lesser said about those folded elbow punches, the better.

Adding a bit of momentum to the weak punches is Arjun Janya's ear-splitting score. He is a great composer on his day, but his work on "mass" films leaves a lot to be desired. Could this be attributed to Janya's need to add a sense of grandeur to a final product that had none? Did he see what we saw?

ADVERTISEMENT
This page was tagged for
Pailwaan (Tamil) tamil movie
Pailwaan (Tamil) reviews
release date
Sudeep, Suniel Shetty
theatres list
Follow @fullhyderabad
Follow fullhyd.com on
About Hyderabad
The Hyderabad Community
Improve fullhyd.com
More
Our Other Local Guides
Our other sites
© Copyright 1999-2009 LRR Technologies (Hyderabad), Pvt Ltd. All rights reserved. fullhyd, fullhyderabad, Welcome To The Neighbourhood are trademarks of LRR Technologies (Hyderabad) Pvt Ltd. The textual, graphic, audio and audiovisual material in this site is protected by copyright law. You may not copy, distribute, or use this material except as necessary for your personal, non-commercial use. Any trademarks are the properties of their respective owners. More on Hyderabad, India. Jobs in Hyderabad.