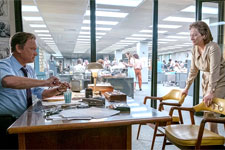 T J Reddy / fullhyd.com
EDITOR RATING
7.5
Performances
Script
Music/Soundtrack
Visuals
7.0
5.0
7.0
7.0
Suggestions
Can watch again
Yes
Good for kids
No
Good for dates
No
Wait for OTT
No
The Washington Post has won 47 Pulitzers (six of which were won in a single year). It has received 18 Nieman Fellowships and 368 White House News Photographers' Association awards. Indeed, "The Post" is one of the most trustworthy and revered names in the world of journalism. And the story that this movie is based on created almost irreparable damage to this institution's reputation and single-handedly destroyed the rights the fourth estate is entitled to.

Shortly after the suicide of the former publisher of The Post Philip Graham, his widow Katherine "Kay" Graham (played by Meryl Streep), who took over publishing duties after her husband's death, was faced with a choice that could make or bury the publication, which at that time was still a local newspaper. Her news team, led by hard-nosed editor Ben Bradlee (Tom Hanks), comes upon classified documents regarding undisclosed information about the surreptitious activities of the United States government in the Vietnam War, and how the war is bleeding the military and the country.

The New York Times, which came upon the documents first, has been throttled by a court injunction from publishing them, and Graham is advised by her lawyers and powerful people right from the Secretary of Defense to refrain from publishing them, too, lest a legal war with the US government led by President Nixon destroy the newspaper. Bradlee, Graham, the journalists and the board of directors are now faced with the choice of either publishing the information and going into an all-out war with a corrupt government, which will also catapult the publication into the national mainstream, or to keep their silence and go against their journalistic integrity.

While these events may have unfolded in the early '70s, they seem more relevant than ever in this day and age. We live in a time where the free press is discredited for false and sensationalist reporting. This is a problem across the globe and not specific to a country or two. However, when push comes to shove, we as citizens depend on the fourth estate to keep us informed. Like the film says, "the free press is dedicated to serving the interests of the governed and not those of the governors". Director Steven Spielberg fast-tracked this project to address these concerns, and chose to ask his audiences some important questions.

Armed with a clever script, a stellar ensemble and Spielberg's trademark touch, The Post's two-hour runtime is quite enjoyable, as can be seen from the rousing applause that it receives when its characters display bouts of intelligence, strength and integrity. Yet, the movie has its flaws. Its first hour is both rushed and slow. With a mountain of exposes being thrown at the audiences including the fates of both the newspapers, Kay Graham's tribulations while dealing with a male-dominated boardroom and the mini-arcs offered to the army of reporters, the movie rarely lets any conflicts register as they are narrated crudely with a distinct lack of nuance to the proceedings.

Unlike the excellent Spotlight, that had distinguishing characteristics among its band of reporters which helped create fully formed characters to root for, The Post tells a simple story of us vs. them that homogenises the many colourful characters of the Oval office and the newsroom. The shortcomings of a rushed project are laid bare for all to see.

What makes this serviceable narrative better than it has any right of being is its stellar cast. Even though many of them, including the legendary Tom Hanks, are given mostly one-note characters, the actors make the audiences empathize with these men and women by sheer force of will and skill. Hanks' gravelly voice spouting out "crusty old man" dialogue is especially a sight to behold.

Meryl Streep puts her best foot forward in her role, but the film abandons all semblance of subtlety with her arc. By making her overreach while displaying her many frailties and shoving a pro-feminist message down the collective throats of the audiences with a distinctly heavy-hand, the movie cheapens its overall impact. A woman speaking up against a group of men is only a step above a woman smoking a cigarette in terms of satisfying arc resolutions.

John Williams adds his signature charm to the film with his music. While it is not his finest work, the sound design of the film is on the whole exquisite. So are its production design and costume work. Every man, woman and child looks like they've been pulled straight out of a picture book from the '70s. Add to that Spielberg's excellently crafted one-shots, and your eyes are bound to be glued to the screen like the eyes of the citizens from the '70s were glued to their scandal-breaking newspapers.

But craft alone can't make a good film great. A movie is built on stories one would like to hear and characters one would like to empathize with. The film has one but falters on the other. The measure of the movie's capability to stand out comes with its final shot. It alludes to the burgeoning Watergate Scandal, and you'll realize that you've enjoyed All The President's Men much more than The Post. One was truly great and the other is just good.
Share. Save. Connect.
Tweet
THE POST SNAPSHOT 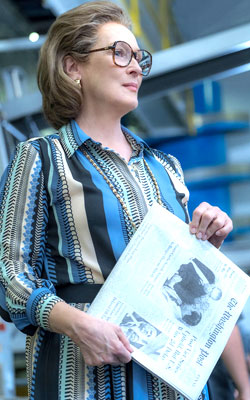 ADVERTISEMENT
This page was tagged for
The Post english movie
The Post reviews
release date
Meryl Streep, Tom Hanks
theatres list
Follow @fullhyderabad
Follow fullhyd.com on
About Hyderabad
The Hyderabad Community
Improve fullhyd.com
More
Our Other Local Guides
Our other sites
© Copyright 1999-2009 LRR Technologies (Hyderabad), Pvt Ltd. All rights reserved. fullhyd, fullhyderabad, Welcome To The Neighbourhood are trademarks of LRR Technologies (Hyderabad) Pvt Ltd. The textual, graphic, audio and audiovisual material in this site is protected by copyright law. You may not copy, distribute, or use this material except as necessary for your personal, non-commercial use. Any trademarks are the properties of their respective owners. More on Hyderabad, India. Jobs in Hyderabad.