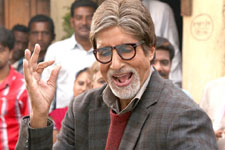 Nupur Barua / fullhyd.com
EDITOR RATING
6.0
Performances
Script
Music/Soundtrack
Visuals
8.0
5.0
5.0
6.0
Suggestions
Can watch again
Yes
Good for kids
Yes
Good for dates
Yes
Wait for OTT
No
The sequel to the very popular Bhoothnath is not at all what you expect. In the first instalment of what looks likely to become a franchise, a bitter ghost was floored by a child and his soul finally attains its rightful liberation once the said child pushes certain events to their desired resolutions. In the second part, however, the ghost who rocks is not happy with the way things are, and now feels the need to prove himself all over again, for the peace of his eternal mind. Amitabh Bachchan returns as the restless spirit, but the rest of the movie, including its director, has nothing in common with the original tale.

Bhoothnath (Amitabh Bachchan) is looking forward to much well-earned rest and contentment in the world of spirits - a castle in the sky, to be precise. To his disappointment and embarrassment, the other inhabitants of the castle do not respect him. In fact, they mock his inability to scare young children - which is what ghosts are supposed to do. Worse, he is a friendly ghost, and that is against the code of ethics in their world.

Bhoothnath decides to regain his lost pride, and visits the land of the living once again, this time to scare a child witless. Instead, he is faced with the daunting task of explaining his existence to Akhrot (Parth Bhalerao), a precocious young boy who lives in the slums of Mumbai.

Akhrot is the only one who can see him, and this makes Bhoothnath's mission very difficult. Inevitably, the two of them become allies after Bhoothnath realises that he wants to help the boy overcome his problems - mostly lack of money, and a mother (Usha Jadhav) who is trying to very hard to make ends meet.

Akhrot and Bhoothnath come up with an ingenious plan to make abandoned/haunted properties inhabitable again, and developers pay the boy well. Life is good, till they chance upon a building that houses trapped souls - these spirits are victims of the corruption of Bhau (Boman Irani), a local politician, who is all set to win the upcoming elections in the area this time round, too. An indignant Bhoothnath then decides to challenge him by becoming his opponent, and chaos prevails.

There may be a slight confusion regarding the tone of the film. Most Bhoothnath fans may expect yet another story of human and ghost relationships and a moral in the story, with the theme of adults being taught a lesson by a child and so on. All of that is there, of course. The first half of the sequel is all about the friendship between Bhoothnath and Akhrot, and it is an equal relationship, in which the young boy is not really in awe, and the adult ghost is not really condescending.

Post intermission, however, the film becomes a lecture on society, which can give you a jolt. It speaks of our duties as citizens and the necessity to vote. Suddenly it is all about elections, and given the timing of its release, the movie is too reminiscent of the current events of our country. Now it is no longer a children's fun film.

The second half becomes tiresome with all the moral lectures, and the despair that clouds the happy mood the story started out with. In fact, the two halves of the movie seem almost unrelated. While the first half is all fun and games, and lots of laughter, the second half is sarcastic and bitter. The dialogues become preachy, and the story becomes predictable and dull. This dichotomy within a story that goes on for half an hour too long, can become chaotic and may leave you bewildered.

Then again, it is an Amitabh Bachchan movie, and the actor is a delight to watch. He never loses a beat as he goes from depressed ghost to spirited spirit. By now, it is a given that there is no role too awkward for him, and he proves it yet again, whether he speaks in chaste Hindi or adjusts his language to suit the setting.

However, surprisingly, Parth Bhalerao gives him a run for his money. This young actor is confident and cocksure, and instantly likeable, what with his tapori language and complete lack of inhibition.

Usha Jadhav is graceful and understated, and she stands out, too. Boman Irani is terrific as the villain, reminding you of his act in Munnabhai 2. He is funny and irreverent. Brijendra Kala as his sidekick and Sanjay Mishra as the lawyer are commendable, too. There is a series of cameos, and they serve the purpose.

The production design is a bit glossy, at least for the part where the slums are shot. The costume design is average, and slightly stereotypical. The VFX for the castle in the sky could have been better. The cinematographer does a decent job of capturing the mood and the colours.

The music, put together by so many music directors, lack uniformity, but certain songs stand out as catchy and fun. The editor could have made the length much, much shorter, but maybe the script demanded that no sequence be cut out.

Bhoothnath Returns is an easy watch, even with the last half an hour seeming stretched. There is no reason to skip it, especially if you are an Amitabh Bachchan fan. Also, Parth Bhalerao is a revelation, and this can be a fun watch if you are not expecting too much from the movie. Take your children to this one and have a few laughs with your entire family.
Share. Save. Connect.
Tweet
BHOOTHNATH RETURNS SNAPSHOT 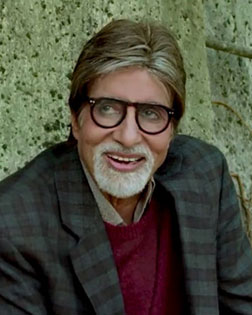 ADVERTISEMENT
This page was tagged for
bhotnaath 2
Bhoothnath Returns hindi movie
Bhoothnath Returns reviews
release date
Amitabh Bachchan, Parth Bhalerao
Follow @fullhyderabad
Follow fullhyd.com on
About Hyderabad
The Hyderabad Community
Improve fullhyd.com
More
Our Other Local Guides
Our other sites
© Copyright 1999-2009 LRR Technologies (Hyderabad), Pvt Ltd. All rights reserved. fullhyd, fullhyderabad, Welcome To The Neighbourhood are trademarks of LRR Technologies (Hyderabad) Pvt Ltd. The textual, graphic, audio and audiovisual material in this site is protected by copyright law. You may not copy, distribute, or use this material except as necessary for your personal, non-commercial use. Any trademarks are the properties of their respective owners. More on Hyderabad, India. Jobs in Hyderabad.