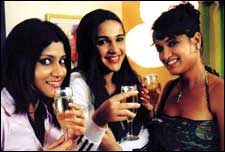 Rohit Murari / fullhyd.com
EDITOR RATING
1.0
Performances
Script
Music/Soundtrack
Visuals
NA
NA
NA
NA
Suggestions
Can watch again
NA
Good for kids
NA
Good for dates
NA
Wait to rent it
NA
After hard-hitting movies like Chandni Bar, Madhur Bhandarkar is back with a movie that is different in every sense of the word. Not only different, it is also stupid. So stupid in fact that even the attempts at acting made by the actors in it pales in comparison.

But fullhyd.com reviewers have never held sad acting against any movie. Over time, we have come to realize the obviousness of the truth - there just isn't enough disk space in this world for us to vent our angst. And we have made our peace with it, thank you. What we do have a bone with is the creative license our filmmakers abuse in the name of art-house cinema. More on this a little later.

The movie is about the life of the so-called socialites through the eyes of Madhavi Sharma (Konkana Sen Sharma), a page 3 columnist. It does not hesitate in calling a spade a spade. It tells you exactly how artificial their lives are, how sick their indulgences are, and how insecure their social status is. It tells you how newspapers auction off page 3 to the highest bidder, and how they create and destroy celebrities. And, it is only for this blatant honesty that the movie gets a rating of one.

There is not much story. Madhavi shares her flat with Pearl (Sandhya Mridul), an air-hostess who finally marries a millionaire more than twice her age, and Gayatri (Tara Sharma), a woman struggling to get her first break in Bollywood who does not hesitate to use the casting couch. Madhavi's boyfriend, Tarun, has no qualms over doing sexual favors to either men or women to become a successful model. There are also Priya (Kunika) and Puspha (Maya Alagh) - socialites who love the company of men half their age.

Among them is Anjali Thapar, wife of Romesh Thapar, an industrialist. Unlike her peers, she runs a children's home. Madhavi develops a deep bond with her. When Anjali dies, Madhavi decides that she has had enough of page 3, and moves on to crime beat as an assistant to Vinayak Manve (Atul Kulkarni). It is here that she unearths the most depraved of all the doings of rich men - child abuse. And this is what makes you question Madhur Bhandarkar's sensibilities.

Yes, child abuse is a serious problem that we Indians have to stop brushing under the carpet. It is much more widespread than we are willing to imagine, and it is sickening. But there are ways to depict the issue. We are not sure why Bhandarkar would choose to show us a bunch of naked little boys sitting on the laps of naked men.

Could you even fathom the emotional trauma those kids would have had to endure when they were stripped on the sets in front of so many people, many of them in various stages of undress? This, itself, constitutes child abuse. Just what were the censors doing when this movie came to them? Just what is the law doing?

Not very long ago, Brooke Shields had a scene in which she had to go topless. Since she was under-aged at the time, a body-double was used. But this is India. Anyone who makes a non-commercial movie can get away with anything. And that is ghoulishly depressing.
Share. Save. Connect.
Tweet
PAGE 3 SNAPSHOT

Am a Hyderabadi, living in Newport UK since the past 2 years! Though I

RATING
6
Dipankar Talukdar on 27th Jan 2005, 5:23am | Permalink
Well, atleast we have the guts to reveal our names here. Further, we come for the review of a movie here, expecting some responsible comments about the movie, not for some personal imaginative opinions. Afterall, this is not a discussion forum
RATING
10
Just Thinking on 26th Jan 2005, 4:08am | Permalink
Mr. Akhil and Mr. Dipankar are both gentlemen of valuable opinions, who place little value on anyone else's opinions, evidently. I am not in the habit of making personal remarks, but then since they don't consider the practice beneath them, I thought I'd humour them. Fanaticism over a movie review - now that's just plain silly
RATING
2
Rajesh Raj on 25th Jan 2005, 5:26am | Permalink
fine
RATING
2
Vivek on 25th Jan 2005, 4:28am | Permalink
I havent seen the movie yet , so i can not comment on it.( the stars are midway coz i had to do it to get the comment on.) But what made me comment here is the nature of the comments on the review.

The level of identification with what was said in the movie about the upper class and us feeling good about ourselves that we are not part of it speaks of the contempt the middleclass has for the rich.

Bandharkar tries to tap into that middleclass mindset to get his movie going. so the result can only be a one sided view of the things happening in those parties.

What we should actually ponder about is, who form the maximum reader base of the page 3 section of the newspapers? and there we have our answers.


RATING
6
Krishna Das on 24th Jan 2005, 6:09am | Permalink
When people go on to write as if they were Academy Awards' representatives, readers get pissed. Humility sometimes... please.
RATING
8
Dipankar Talukdar on 24th Jan 2005, 5:33am | Permalink
Mr. Rohit Murari's review for the movie came as a rude shock to me. Either he is out of his minds or got no sense about movies. May I request Mr Murari to try his expertise at a job better suited to him.
RATING
10
Akhil T on 24th Jan 2005, 1:09am | Permalink
Its a much better movie than what Mr. Murari says. Although there is a bit of ambiguity about the direction of the story, the message is pretty clear. U cant give a movie a single star just coz. of one scene. Had that been deleted wld. u have given it 4 stars? Coz thats the onle weekness u've pointed out.
RATING
8
Snehashis Dutta on 23rd Jan 2005, 7:18am | Permalink
All the revelations of the so called UPPER CLASS at one go...

ADVERTISEMENT
This page was tagged for
Page 3 hindi movie
Page 3 reviews
release date
Konkana Sen Sharma, Atul Kulkarni
theatres list
Follow @fullhyderabad
Follow fullhyd.com on
About Hyderabad
The Hyderabad Community
Improve fullhyd.com
More
Our Other Local Guides
Our other sites
© Copyright 1999-2009 LRR Technologies (Hyderabad), Pvt Ltd. All rights reserved. fullhyd, fullhyderabad, Welcome To The Neighbourhood are trademarks of LRR Technologies (Hyderabad) Pvt Ltd. The textual, graphic, audio and audiovisual material in this site is protected by copyright law. You may not copy, distribute, or use this material except as necessary for your personal, non-commercial use. Any trademarks are the properties of their respective owners. More on Hyderabad, India. Jobs in Hyderabad.