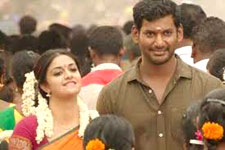 T J Reddy / fullhyd.com
EDITOR RATING
3.5
Performances
Script
Music/Soundtrack
Visuals
4.0
2.0
3.0
4.0
Suggestions
Can watch again
Yes
Good for kids
Yes
Good for dates
Yes
Wait to rent it
No
Where I come from, we have a saying that goes something like this, "If a boy fails his 10th exams for the first time, everyone feels sad. If the same boy fails them multiple times, everyone gets used to it." That is exactly how we feel when it comes to masala potboilers these days. They are the perpetual underachievers, and nobody seems to have any clue as to how to inspire them to do better.

Like Prashanth's dad in Pelli Choopulu, we wouldn't be against our beloved underachievers cheating to do better. Writer/director N Linguswamy constructs his script by allowing plot points from other (better) films to coalesce with one another. Rajkiran reprises his role as Raja Reddy, a man whose sole focus is to bring peace to seven villages and conduct their festival that has been put on ice for past 7 years. The biggest hurdle in his way comes in the form of Bhavani (Varalaxmi Sarath Kumar), a widow who has vowed revenge on the family that killed her husband. She needs to murder the final member of said family during the festival to complete her quest for vengeance. Raja Reddy and his cohorts need to thwart her at any cost, and Reddy's son Balu (Vishal) returns to aid his dad.

The film's primary plot, character design and visual cues are reminiscent of Thevar Magan, Vishal's own Pogaru, Padayappa, Pedarayudu and many other movies that form the foundation of the village-based mass film genre. Your high school classmates would have told you that the first rule of copying is to never replicate the other person's answers verbatim. The copy-er is supposed to rewrite the answer in his own words to not be caught. Pandem Kodi 2 violates that basic principle.

The movie has a story with no soul, a screenplay with no heart and a presentation that rings hollow and loud. Linguswamy's good ideas and whistle-worthy lines begin and end with Bhavani, but her character, too, is underwritten. There is a sub-plot which involves a man she has held as a captive for 7 years, another one involves her young son's bloodlust which is fuelled by her vengeance, there are glimpses of her anarchic nature, and there is a welcome dash of symbolism hidden in her mangalasutra, but none of these ideas is well-explored. They are all used as fodder for our morally superior hero to construct his speeches around.

Grandfatherly Raj Kiran is delightful in every cinematic outing, and his presence adds gravitas to a role that simply needs him to act tough and be regal. The layering he brings to a one-dimensional character is however offset by Vishal's one-dimensional essaying of a layered character. Raj Kiran is always clad in white to illustrate his bond with his hometown. Vishal's sartorial choices don't match those of his father as his (Vishal's) arc is that of him learning to take the mantle from his dad. But the film doesn't allow the arc to reach its satisfying and logical conclusion as the directorial choices rarely match the story being told. Also, we've seen this arc before in the original Pandem Kodi. It has been rinsed and repeated 13 years later, and rest assured, it'll be rinsed and repeated if a Pandem Kodi 3 ever hits our screens, simply because, in this world, that is the only story worth telling.

In addition to an underwritten hero and an equally under-developed villain, the movie populates its frames with a plethora of forgettable supporting characters. Loud goons, hyper-masculine uncles and pissed off grandmothers are a staple of this genre of films. And lest we forget, so are leading ladies annoying (bubbly) to a tee. Enter Keerthy Suresh and her manic performance that is totally out of sync with the movie she is in. Her character is loud and boisterous, and responsible for at least one hour of wasted runtime, and that is one hour of your life you are never getting back.

Included in that hour are grating songs and awkward romantic banter that solidify the leading lady to be no smarter than the "dokku" luna she rides. And the unconvincing romance and the nuance-free scenes that envelop the movie around the couple are scored by template mass cinema music which we are sure is available on every Casio keyboard. ("Make your own mediocre masala film with our patented stock music and we will throw in enough lighting equipment to bathe every frame of your project with lights bright enough to make the sun blush.")

During the first act of the Pandem Kodi 2, Raja Reddy meets his son after seven long years of separation. He says, "Look at him. Nothing has changed." We concur. 13 years after their first tryst with the silver screen, nothing seems to have changed. The music is loud, the camerawork is amateurish, the special effects are patently silly, the story is recycled, and the overall experience is much less rewarding owing to the law of diminishing returns.

As a coda to Prashanth's father's sage advice, we'd like to add, "Copying doesn't make one a disappointment, failing on almost all fronts even after copying does."
Share. Save. Connect.
Tweet
PANDEM KODI 2 SNAPSHOT 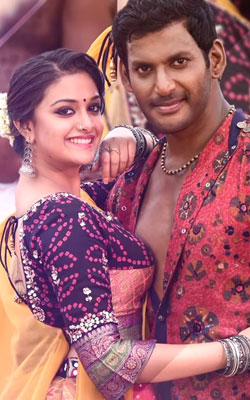 ADVERTISEMENT
This page was tagged for
pandem kodi 2 full movie watch online
pandem kodi 2 telugu full movie
Pandem kollu 2 full movie online watch
pandem kodi 2 watch online telugu
Pandem Kollu 2Telugu Movie Full Movie
Follow @fullhyderabad
Follow fullhyd.com on
About Hyderabad
The Hyderabad Community
Improve fullhyd.com
More
Our Other Local Guides
Our other sites
© Copyright 1999-2009 LRR Technologies (Hyderabad), Pvt Ltd. All rights reserved. fullhyd, fullhyderabad, Welcome To The Neighbourhood are trademarks of LRR Technologies (Hyderabad) Pvt Ltd. The textual, graphic, audio and audiovisual material in this site is protected by copyright law. You may not copy, distribute, or use this material except as necessary for your personal, non-commercial use. Any trademarks are the properties of their respective owners. More on Hyderabad, India. Jobs in Hyderabad.