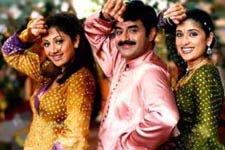 In the Indian versions of the tinsel town, two rituals frequently keep happening to actors who have their acid tests on Fridays. The coronation ceremony or the funeral. Which one it will be depends on how deftly the actors manage to give the layman and the scribe their chunks of dreams and art respectively.

In one of the very recent coronation ceremonies, a stalwart with the gene of celestialness was crowned after he gave the biggest hit of Telugu cinema till date called Narasimha Naidu. And that's where the uneasiness, as the Bard had aptly put it, may have started. This uneasiness shows blatantly in his latest attempt at satiating his subjects' need to dream and worship their star.

Bhalevaadavi, Baasu! How could that uneasiness (in the scribes' jargon, it means irresponsible complacence) in you replace the power in your earlier roles and make way to this kitsch in the absolute sense of the term? How could you let that uneasiness affect your intellect and, more unpardonably, challenge the viewers' possession of it too? You forgot one minor thing. Your subjects will not always be so pardoning.

So you play a forest officer with a sidekick to boot, whose sole aim in life is to poach the poachers headed by Banerjee (Prakash Raj), who is, as is the case with Prakash Raj's earlier roles, a nut. He keeps on saying that he is a genius but very dangerous. You also have the job of prancing around with two nymphomaniacs; a village belle (Anjala Jhaveri) and a senior forest officer (Shilpa Shetty). The entire cast's double entendres, including yours, make even Dada Khondke turn in his grave.

In the second half, we also have a twist. You are not the forest officer but are actually a thief who replaces the real one after he has been killed by the poachers. You also have to go through the senti of his sister's marriage and the mother's pains. In hindsight, believe us, we were feeling the pains too.

Some more sobs, prancing and double entendres later, you bash up the goons and all is well.

An earnest advice from an equally earnest admirer of yours, Mr. Balakrishna. Please make your roles a little worthy of the adulation you have received earlier. And please realize the fact that the crown changes heads at the drop of a hat. Become a legend with grace, do not fade away to oblivion with a whimper.

By the way, when last heard, an upstart called Pavan Kalyan was already on his way to being crowned.
Share. Save. Connect.
Tweet
BHALEVAADIVI BAASU SNAPSHOT

just do not say all shit news where are the facts. I can say i am the PM of India.
No movie has surpassed still.

RATING
10
Erwte on 27th Jun 2001, 6:38am | Permalink
hey kumar, good statistics, but we feel sorry for u as khushi surpassed all of them.
RATING
2
P KUMAR on 27th Jun 2001, 12:46am | Permalink
HELLO CHIRU FANS
is there any hero to break the record created by balakrishna in south india[124 theaters 50 days narsimharaidu (105 theaters 100 days narsimharaidu) (31 theaters 175 days Samarasimha reddy)
RATING
10
98439 on 26th Jun 2001, 9:34am | Permalink
who is this useless reddy!!!!
RATING
2
Krishna Reddy Pullela on 24th Jun 2001, 12:48pm | Permalink
Don't write such comments, This site seems to be a "Chimpanji's" site. That' s why you are trying to promote "Pichchi Kalyan".
RATING
8
Iuihtih on 23rd Jun 2001, 12:13pm | Permalink
ee balakrisna gaadu inka mukku moosukoni tv serials lo act chesukovacchhu
RATING
2
Kumar on 21st Jun 2001, 11:22pm | Permalink
not a good movie. please delete all foul language messages don't be like tc.com
RATING
4
Vinay on 19th Jun 2001, 8:27am | Permalink
This movie definetly
runs 2 weeks in main theatres.
RATING
2
Vineet Kumar on 18th Jun 2001, 12:16pm | Permalink
This is a bad film. Better not to watch these type of films.
It looks like miracles don't happen again and again for balakrishna. Even after 25 years of experience balakrishna doesn't even know the basics of acting
RATING
2
Kamalesh Gupta on 18th Jun 2001, 12:10pm | Permalink
Hello Kiran,
U may b a balakrishna fan but u should accept the fact that this is an utterflop film. I feel very sorry for you. there is always next time. Balakrishna has never given consistent hits in the last 5 to 6 years. one more thing u need to notice is that kushi is going to b industry's biggest hit. So better luck next time.
RATING
4
P Kiran on 17th Jun 2001, 11:11pm | Permalink
hello chiru fans,bhalevadivi basu is not bore film thanmrugaraju,and also than choodalanivundi,sneham kosam,eddaru mitrulu,annayya.ok.please compare thease all films with bhalevadivi basu.bhalevadivi basu is better than all these movies.it collect 1,00,000.00[one lakh]share in mangalagiri in first day only.in vijayawada releasing day morningshow began on3.30pm.in vijayawada also goodopenings.guntur 100days talk.vijayawada 100 days talk.east godavari and west godari also 100days talk.in rayalasimasuper hit talk.hyderabad also hit talk.in some centers it cross all the openings of narasimhanaidu.it continues 100days in 40 centers minimum.bhalevadivi basu most entertinement movie than all movies[kushi also].this is full of comedi .six songs are all good.balakrishna danced very well .ok.
RATING
10
Virish on 17th Jun 2001, 12:59pm | Permalink
2 weeks movie..........
RATING
2
Raju Kumar on 17th Jun 2001, 11:55am | Permalink
Good Business for Zandu Balm vendors and Saridon and Anacil Vendors.
RATING
2
Raj on 17th Jun 2001, 1:26am | Permalink
First half Boru Basu
Second half Bharinchalemu Basu
Overall Waste Basu

ADVERTISEMENT
This page was tagged for
balevadivi basu review
Bhalevaadivi Baasu telugu movie
Bhalevaadivi Baasu reviews
release date
Balakrishna, Anjala Zaveri
Follow @fullhyderabad
Follow fullhyd.com on
About Hyderabad
The Hyderabad Community
Improve fullhyd.com
More
Our Other Local Guides
Our other sites
© Copyright 1999-2009 LRR Technologies (Hyderabad), Pvt Ltd. All rights reserved. fullhyd, fullhyderabad, Welcome To The Neighbourhood are trademarks of LRR Technologies (Hyderabad) Pvt Ltd. The textual, graphic, audio and audiovisual material in this site is protected by copyright law. You may not copy, distribute, or use this material except as necessary for your personal, non-commercial use. Any trademarks are the properties of their respective owners. More on Hyderabad, India. Jobs in Hyderabad.