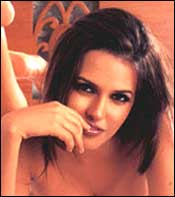 Mithun Verma / fullhyd.com
EDITOR RATING
3.0
Performances
Script
Music/Soundtrack
Visuals
NA
NA
NA
NA
Suggestions
Can watch again
NA
Good for kids
NA
Good for dates
NA
Wait to rent it
NA
Julie is a not any other ordinary movie. It is this ordinary movie itself. It won't be fair if this review does not span the entire spectrum of audience that come to watch such cinema, namely, desperate skirt-chasers that don't get any.

So, for aesthetic value, let's categorize these guys into various groups, and watch Julie from their 'perspective'. Here's presenting it, with guest appearances from the critics, Neha Dhupia and the few unfortunate viewers!

Julie is a bubbly girl in Goa living with her dad, and bathing with her boyfriend. She occasionally even does more than bathe with him while covering her body strategically with dried grass.

The Critics: Hubba, hubba! Neha's rear is out of this world! (Psssst! Guys! You're the critics, remember? Behave!) Ahem! Okay, we'll get to the bottom of analyzing Julie straightaway. Basically, she's making an ass out of herself. What was she thinking, fooling around with that country bum? If she were in school, she'd be spanked for such loose behaviour.
The Audience: We want sex. We want sex.
The Neha Dhupia: Um, the script demanded my full attention. So every scene, I was meditating on it. I prefer not to wear clothes while meditating. They interfere with my thoughts, especially those thoughts that tell me that if I wear clothes, no idiot would ever give me a role. But in one touching moment, when I'm making out with my boyfriend, I couldn't meditate properly. Did you know that dried grass can cause you to itch uncontrollably? It stings, too.

Julie's boyfriend then ditches her. Heartbroken, Julie shifts to Mumbai. There, she bumps into the suave Sanjay Kapoor. This time, though, she's careful with her relationship. Instead of using dried grass, she uses a pink sheet to cover herself.

The Critics: We told you that her country bum would get her into trouble. Anyway, after she moved to Mumbai, her acting has slightly improved. We don't want to spank her anymore, just head butt her.
The Audience: We want sex. We want sex.
The Neha Dhupia: In this part of the movie, I portrayed emotions without talking too much. Moreover, it was difficult to talk with Sanjay Kapoor's tongue in my mouth. I had to do a lot of homework for this part. No, not for the tongue part, silly, for the emotions. But the dog ate my homework. Promise.

Then even Sanjay Kapoor ditches Julie. He wants her to sleep with one of his clients. She's devastated. All men want from her is her body. So she'll give to them, but at a high price. She becomes a high-fly street walker.

That's when India's biggest business magnet, Priyanshu Chatterji, comes along. He doesn't want her body (and, no, he's not gay - he's just stupid, we assume), he wants her love. He proposes marriage.

This phase of the movie is completely clean, showing tender romance, intense emotions and human values. Some real drama and heart-touching moments in here.

In the end, even though Julie tries to degrade Priyanshu by going on National television, revealing that India's most eligible bachelor has fallen for a girl like her, Priyanshu still accepts her. He even makes us realise that even women like her are, well, women. Very touching, we must admit.

The Critics: Just because a couple of guys dumped her, Julie had no reason to become a call girl. Especially when the dirty scenes with her boyfriends were depicted in graphic detail, and the scenes after she becomes a professional are almost non-existent. And Neha looks like she left her brains at home. That's not exactly what we expected when we heard that she's going 'topless'.
The Audience: We want our money back. We want our money back.
The Neha Dhupia: I'm so glad that a whole movie was based on my acting abilities. I'm even more glad that that movie never worked out and this movie happened where it used my 'all round' appeal. Thank you for giving me a role to display my 'hidden talents'. Thank you.

For all the women's lib clods, notice the definite article 'the' in front of Neha Dhupia's name. That's showing that she is also equal ('the' critics, 'the' audience etc.) with everything else in here. 'The' Neha Dhupia and 'the' women like her rule. Anything to make you dumb activists happy. Peace.
Share. Save. Connect.
Tweet
JULIE SNAPSHOT

ADVERTISEMENT
This page was tagged for
Julie hindi movie
Julie reviews
release date
Neha Dhupia, Sanjay Kapoor
theatres list
Follow @fullhyderabad
Follow fullhyd.com on
About Hyderabad
The Hyderabad Community
Improve fullhyd.com
More
Our Other Local Guides
Our other sites
© Copyright 1999-2009 LRR Technologies (Hyderabad), Pvt Ltd. All rights reserved. fullhyd, fullhyderabad, Welcome To The Neighbourhood are trademarks of LRR Technologies (Hyderabad) Pvt Ltd. The textual, graphic, audio and audiovisual material in this site is protected by copyright law. You may not copy, distribute, or use this material except as necessary for your personal, non-commercial use. Any trademarks are the properties of their respective owners. More on Hyderabad, India. Jobs in Hyderabad.