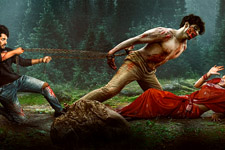 Anil Bandhakavi / fullhyd.com
EDITOR RATING
3.0
Performances
Script
Music/Soundtrack
Visuals
3.0
2.0
5.0
3.0
Suggestions
Can watch again
No
Good for kids
No
Good for dates
No
Wait to rent it
Yes
Zombie Reddy is a title that's hard to take seriously. And about 30 minutes in, you realise that even the movie follows suit. Written and directed by Prasanth Varma, this film is apparently the first attempt at the zombie genre in Telugu cinema, which sounds implausible considering the number of zombie-like characters that were featured in Telugu cinema over the decades. (Chiranjeevi's 1985 hit song Golimaar from the movie Donga had zombies running amuck and is still celebrated - so much so that it was borrowed for a scene in this movie.)

The film is about four young game developers from Hyderabad led by Mario (Sajja Teja). One member of the team, Kalyan (RJ Hemant), is set to get married in Kurnool. Following the huge release of a new game, Mario, Maggie (Daksha Nagarkar) and Bhadram (Kireeti Damaraju) hit the road to attend Kalyan's wedding.

On the way there, they accidentally hit a wandering pedestrian in the woods. When they get out to check on his well-being, they find his behaviour erratic, and he bites into Bhadram's hand. It's no surprise that he's a zombie. Very quickly, an old man pops into the scene and drags away the zombie, claiming that he's mentally unstable. Bhadram, a hypochondriac, is worried about the bite, but Maggie brushes off his concerns.

The backstory on the old man, which is revealed at the beginning of the film, is that he is a virologist who is conducting experiments on random civilians to create a vaccine for Covid. His botched formulas turn his subjects into zombies.

Once in Kurnool, the guys are absorbed in the wedding preparations. They quickly learn that the bride's father is tied up in a feud with another man in town who vows to take Kalyan's head after the wedding. Mario takes the lead on protecting Kalyan, but his efforts keep getting thwarted by Nandini (Anandi).

Meanwhile, people around town start turning into zombies as the virus, ignited by Bhadram, spreads rapidly. Everyone's motives get dissolved in the zombie epidemic taking over Kurnool, and Mario's challenge billows from protecting Kalyan to fighting the deadly virus taking over the population.

Zombie Reddy is another addition to the list of films that aim high with their concepts but fail to deliver exciting stories. Firstly, the movie is too long. Most of the film is just zombies biting normal humans and turning them into zombies, and the zombie population keeps increasing. The story of the feud runs in parallel for a while, but at a point when the zombie population exceeds some critical value, simply gets washed away by the zombie storyline.

The novelty of the movie is not complemented by a gripping execution that makes you want more. You mostly sit through it thinking, let me guess, now she turns into a zombie. In this manner, the film just goes past you like an eventless Wednesday at work, whose only purpose is to get you closer to the weekend. Even the standoff between the zombies and humans is just a clichéd fight scene. Compelling performances and less predictability could've given this movie a bump in points, but there's nothing much there, either. A pretty decent background score, however, gives this one something in the positives column.

Perhaps the gaming crowd was targeted with this film, given it implements graphic elements from some classic video games. Even Mario can be thought of as the protagonist of a zombie-themed game, fighting to curb the spread of the epidemic. I doubt, however, that that's enough to draw in the gamers, who'd rather take on the task themselves on their consoles at home.
Share. Save. Connect.
Tweet
ZOMBIE REDDY SNAPSHOT 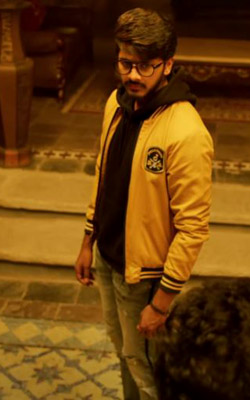 ADVERTISEMENT
This page was tagged for
Zombie Reddy Full movie language:en
Zombie Reddy telugu movie
Zombie Reddy reviews
release date
Sajja Teja, Anandi
Follow @fullhyderabad
Follow fullhyd.com on
About Hyderabad
The Hyderabad Community
Improve fullhyd.com
More
Our Other Local Guides
Our other sites
© Copyright 1999-2009 LRR Technologies (Hyderabad), Pvt Ltd. All rights reserved. fullhyd, fullhyderabad, Welcome To The Neighbourhood are trademarks of LRR Technologies (Hyderabad) Pvt Ltd. The textual, graphic, audio and audiovisual material in this site is protected by copyright law. You may not copy, distribute, or use this material except as necessary for your personal, non-commercial use. Any trademarks are the properties of their respective owners. More on Hyderabad, India. Jobs in Hyderabad.