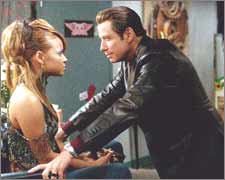 Indu Gopoji / fullhyd.com
EDITOR RATING
3.0
Performances
Script
Music/Soundtrack
Visuals
NA
NA
NA
NA
Suggestions
Can watch again
NA
Good for kids
NA
Good for dates
NA
Wait to rent it
NA
'Be Cool' is a sequel to 'Get Shorty' made 10 years later, and is a shining example of yesterday's curd turned sour. The story is about Chili Palmer trying his hand at the cut-throat movie industry, after convulsing with the movie-flu he was down with in 'Get Shorty'. He teams up with Elsie Athens, widow of his long-lost friend James Woods, in a hunt for that one thundering hit.

Throughly enamored by teen singing sensation Linda Moon, he is down with the itch of playing her godpapa in the industry. But the baby crooner is already in a contract with the joke of a record label company Car-O-Sell, with a salad-brained manager Raji, famous for his master's degree in mismanaging careers.

So the sophisticated, no-nonsense ex-mafia man Palmer decides to green the deal, thereby locking horns with Raji and his equally annoying partner Nick Carr. Raji's gay bodyguard (none other than The Rock) is on a mission to ride Palmer's nerves to an audition for some God-forsaken movie.

Meanwhile, Palmer's ghosts from the past, wig-wearing Russian mafia hitmen, are also on the watchout for him. In addition, Palmer has new weeds mushrooming in the courtyard: James has bequeathed a property of 300k, in debt, to his wife Elsie - courtesy the underworld producer Sin LaSalle. And finally, how the mafia-turned-James Bond smooth-talks his way out of this snake pit, is something you don't have to look forward to if you have watched 'Get Shorty'. If you haven't, then don't bother.

Vince Vaughen plays the paler version of Eminem, taking the character Raji to such heights of perfection that the truth that he is white keeps staring you in the face all the while. He tries so hard in his role that you just can't help but get annoyed with him. Andre, of the band Outkast, does a good job as the bumbling cousin of Sin LaSalle. His incapacity to plonk his ass on the couch has the short term effect of inducing peals of laughter, but in the long run, you can't help taking the guilt trip. That's because you almost kick yourself for falling for that trap of an act.

Uma Thurman and John Travolta's dance sequence, in addition to being unnecessary, is so passionate that you are exhausted watching them on screen. You just need someone to wake you up for the next scene. Thurman has to come up with a good excuse for signing up for this role.

Steven Tyler of Aerosmith is in a cameo where he is just himself, which is a stark contrast from the other cast of the movie. Cedric The Entertainer is true to his name, and is thoroughly entertaining as the underworld music producer. And how can we forget The Rock? He's the only person to play on your minds after you walk out of the hall. He manages to grab some laughs with his oh-so-gay act, topped with some silly singing aspirations.

Be Cool turns out luke warm in its hard work at being cool. Beware of being tricked into watching this movie just out of respect for 'Get Shorty'. The director Gary Gray has his fingers crossed for just that.
Share. Save. Connect.
Tweet
BE COOL SNAPSHOT

ADVERTISEMENT
This page was tagged for
Be Cool english movie
Be Cool reviews
release date
John Travolta, Uma Thurman
theatres list
Follow @fullhyderabad
Follow fullhyd.com on
About Hyderabad
The Hyderabad Community
Improve fullhyd.com
More
Our Other Local Guides
Our other sites
© Copyright 1999-2009 LRR Technologies (Hyderabad), Pvt Ltd. All rights reserved. fullhyd, fullhyderabad, Welcome To The Neighbourhood are trademarks of LRR Technologies (Hyderabad) Pvt Ltd. The textual, graphic, audio and audiovisual material in this site is protected by copyright law. You may not copy, distribute, or use this material except as necessary for your personal, non-commercial use. Any trademarks are the properties of their respective owners. More on Hyderabad, India. Jobs in Hyderabad.