Think those are the starting times for the second shows in Hyderabad? Guess again. They're the times I looked at my watch during this wretched movie just to make sure time hadn't actually stopped altogether.

Following in the footsteps of Bachelors, College and Chocolate, Lady Bachelors resurrects one of the most clichéd themes of all times: naughty-bachelors. The film imparts a new low to the term "paying audience". After viewing it, it seemed less likely that it was an actual film, and more likely that the whole thing was an elaborate sting operation set up by the Government to see if they could get Al-Qaida members to come to them.

Neelambari (Jyothi Misra) is the only chaste member of a vile group of raunchy lady-bachelors (RLBs). Neelambari is chaste in the sense that she will fall only for the 'guy' who doesn't immediately ejaculate on her shoes. Enter Venkata Subba Rao (Venkat), the 'guy'. He expresses his love to her, to which she replies by saying that she will believe him only if he comes to her hostel in the dead of the night and kisses her within three days (aha! an Agni Pariksha! we guess our man has to resist all the RLBs' moves and go straight to her!).

But alas! All three days he follows one or the other RLBs into their rooms, mistaking them for Neelambari. The question, of course, is that if Venkat loved Neelambari so much, couldn't he have recognized that it is not Neelambari that he is following in the first place?

Naturally, answering such a simple question would require logical thinking, which would require a brain, which is probably too much to ask of anybody involved in this bomb. Finally, there is this slapping the RLBs back to senses - 'life is short and blah blah blah blah blah blah.' (Funny! After the movie, we thought life is not short enough.) 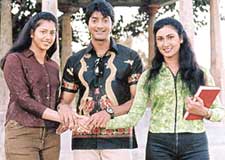 The performances are shoddy at best. Venkat, the actor (contrary to all evidence, we have to believe he is one), acts like he's got pieces of dental gauze lodged in his back teeth, and it's hard to tell whether he's trying to be funny or intentionally incoherent. Talk about Jyothi Misra... we'll say she is to action what the kazoo (a rude musical instrument) is to music. Period.

Making the matters worse, director Udaya Kanth takes the script and pretty much wipes his ass with it. There are numerous "hand-held" shots that make you feel sick. Rumor has it that he has figured that taking the things that made sense in that film and making them incomprehensible would appeal to modern audiences. Our bet is that he tried to convince somebody in the universe that being an idiot and being a filmmaker have some symbiotic relationship.

Lady Bachelors is a kind of film that makes you count the number of lights in the theater's chandelier (mine had eleven) and debate on whether or not you should kick the person in front of you in the back of the head just to see some action. Period.
Share. Save. Connect.
Tweet
LADY BACHELORS SNAPSHOT
See Lady Bachelors full details
LADY BACHELORS USER REVIEWS
1 - 10 OF 10 COMMENTS
POSITIVE  |  NEGATIVE |  NEWEST  |  OLDEST  |  MOST HELPFUL  |  LEAST HELPFUL
USER RATING
4.4
26 USERS
Performances
Script
Music/Soundtrack
Visuals
NA
NA
NA
NA
Can watch again - NA
Good for kids - NA
Good for dates - NA
Wait to rent it - NA
Kama Shastri on 31st Oct 2002, 3:56pm | Permalink
Fantastic movie to enjoy!! All with wild jokes which we don't find nowadays in movies///// guys just don't argue that this movie is not good... so and watch the theatre being full... love all hate none
RATING
10
Napster on 30th Oct 2002, 5:59pm | Permalink
Hey Kiran: On a lighter note, did you realise our debate here is gradually reducing the rating for "Lady Bachelors". Perhaps if we continue like this for a few more rounds, we will bring down the rating to ZERO which is what it deserves. Fullhyd should include a "No star" rating in the Your rating dropdown list. Until next time, Chow.
RATING
2
Napster on 30th Oct 2002, 5:51pm | Permalink
Dear Mr. Nadella: If that is so than drop the charade. Don't be part of the "coconut club". You know what I mean ? Brown outside but white inside. For your information, modern American English is a tortured and raped cousin of the british original. A few doses of good English prose daily should do you good.
RATING
2
Kiran Nadella on 30th Oct 2002, 1:48pm | Permalink
Dear Napster: We guys at FULLHYD, straightforwardly, are proud to be citizens of India. Period!
RATING
2
Napster on 30th Oct 2002, 12:38pm | Permalink
Dear Suresh: Most reviewers at fullhyd.com are US returnees. Hence they tend to use words like "period" (which means either fullstop or end of discussion). References to american slang and pop culture are common place in their reviews.
RATING
2
Suresh on 30th Oct 2002, 4:44am | Permalink
what r "period"'s in ur review?
RATING
2
Ramesh N on 29th Oct 2002, 3:49pm | Permalink
Why do fullhyd team waste time on reviewing such movies?
RATING
2
Chakri S on 29th Oct 2002, 3:47pm | Permalink
First ever boring movie in the history of Tollywood.
RATING
10
Ban_Telugu_Movies on 29th Oct 2002, 12:49pm | Permalink
Dear Moderator: Is it OK for reviwers to use words like "ejac***te" and "wipe his a**"? You would delete words like these if written by readers.
Can you say "DOUBLE STANDARDS"?
RATING
2
Vinay Seth on 29th Oct 2002, 12:56am | Permalink
A kick ass review after a long time! Kudos to Fullhyd! "9:00pm, 9:15pm, 9:30pm, 9:45pm, 10:00pm" - ROTFL.
RATING
2
LEAVE A COMMENT
fullhyd.com has 700,000+ monthly visits. Tell Hyderabad what you feel about Lady Bachelors!
MORE MOVIES
Latest Reviews
Kadhanika
Shukra
Deyyam - 2021
Tempt Raja
Vakeel Saab
more
Wild Dog
Sulthan (Telugu)
Sulthan
Rang De (Telugu)
Saina
Aranya
Sashi
Chaavu Kaburu Challaga
Mosagallu
Gaali Sampath
Contemporary Reviews
Dil Jo Bhi Kahey
Madhyanam Hatya
Pandem
Swami
Neeku Nenu Naaku Nuvvu
more
Oka 'V' Chitram
Parasuram
King Of Bollywood
Kisna
Girlfriend
Kanchanamala Cable TV
Hulchul
Intlo Sreemathi Veedhilo Kum...
Ek Se Badhkar Ek
Random Reviews
Entrapment
Okato Numberu Kurraadu
Flightplan
The Dark Dancer
The Angrez
more
Watchmen
Shrek Forever After - 3D
Brahmi Gadi Katha
Shakuni
Policegiri
Mastram
Piku
Saahasam Swaasaga Saagipo
Lady Bird
Meeku Maathrame Cheptha
SEARCH MOVIES
Dissatisfied with the results? Report a problem or error, or add a listing.
ADVERTISEMENT
SHOUTBOX!
{{todo.name}}
{{todo.date}}
[
ip{{todo.ip}}
]
{{ todo.summary }}... expand »
{{ todo.text }} « collapse
First  |  Prev  |   1   2  3  {{current_page-1}}  {{current_page}}  {{current_page+1}}  {{last_page-2}}  {{last_page-1}}  {{last_page}}   |  Next  |  Last
{{todos[0].name}}

ADVERTISEMENT
This page was tagged for
Lady bachelors Telugu movie
Lady Bachelors telugu movie
Lady Bachelors reviews
release date
Venkat, Radha
Follow @fullhyderabad
Follow fullhyd.com on
About Hyderabad
The Hyderabad Community
Improve fullhyd.com
More
Our Other Local Guides
Our other sites
© Copyright 1999-2009 LRR Technologies (Hyderabad), Pvt Ltd. All rights reserved. fullhyd, fullhyderabad, Welcome To The Neighbourhood are trademarks of LRR Technologies (Hyderabad) Pvt Ltd. The textual, graphic, audio and audiovisual material in this site is protected by copyright law. You may not copy, distribute, or use this material except as necessary for your personal, non-commercial use. Any trademarks are the properties of their respective owners. More on Hyderabad, India. Jobs in Hyderabad.