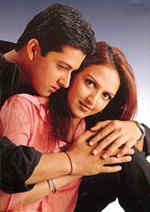 Smriti Kashyap / fullhyd.com
EDITOR RATING
5.0
Performances
Script
Music/Soundtrack
Visuals
NA
NA
NA
NA
Suggestions
Can watch again
NA
Good for kids
NA
Good for dates
NA
Wait for OTT
NA
Lorry-driver Sunny's baby sister makes her debut in this all-too-mystifying flick called KMDSP. The mystifying part is that despite two rather talented parents, the offspring has none of it rubbed off on her. And since Sunny inherited somebody's large vocal chords, poor Esha appears to have got the short end of the stick, and seems to be completely shortchanged when it comes to the acting department.

It's really amazing how one can look so disinterested in one's own launch vehicle. Esha's expression throughout the flick seems to be that of suppressing a yawn, and a large one at that. And when she's not looking doped, she has her attention diverted towards the desi version of Angelina Jolie, Aftab.

The story takes off like this - Aftab plays Aman Puri, a regular Mr. Innocence and Virginity, a squeaky clean guy who can give Britney Spears a run for her money with his 'good habits'. He's supposed to be a student in NIFT (but we'll let that be). Anyway, while everybody is busy trying to vie for his attention, he has focused all his interests towards Miss Woodblock Aisha (Esha Deol), who doesn't give two and a quarter hoots about his advances.

Now no self-respecting hero can woo a lover without the mandatory song and dance. And Aisha's mom Manasi Devi (Jaya Bachchan) enjoys Aftab's own version of 'chitrahaar' as she seems favorably inclined towards him.

Esha of course has a history, and the history is revealed in the post interval phase, boldly assuming that you are still around in the theater. The funda is that she was earlier married to a psychotic Dushyant (with a name like that, a psycho is the least he can be), Sanjay Kapoor. Now this dude had a kinky way around things - tagging along her with his video camera, he'd force her to do things that no self-respecting Indian bahu would do. Naturally Esha smashes things around and makes a quick getaway, but not before setting the tent on fire. And not any regular tent this, either - it is the tent that Sanjay was snoozing in.

Like any run-of-the-mill woman who's set a man on fire, Esha naturally assumes that he's kicked the bucket. The twist here is that Jaya Bachchan is actually her ma-in-law, and not her ma. Anyway, back to the future - it's Aftab and Esha's engagement day, and Psycho Sanju turns up. And much to everybody else's chagrin, breaks into full-fledged gaana-waana.

The rest of the flick deals with the termination and extermination of certain unwanted persons and you have to deal with all the moronity that is splashed your way. Sanjay Kapoor tries to terrorize Esha and everybody else in his vicinity, and of course, keeps wearing a corny mask to prove his seriousness as a psycho. Okay Sanju, 10 brownie points for doing a good job!

Aftab is alright, and Jaya Bachchan keeps sniffing through the flick. And she deserves it, too - if it weren't for her, there wouldn't have been a Dushyant in the first place, would there, ma? There's also some comic relief in the form of Jaspal Bhatti and some take-offs on Mohabattein. It's a one-joke movie, if you ask me.

Well, the flick won't be tried for arson, as it won't exactly set the box office on fire. With a cast that seems to be working within the narrow limits of a crazy script, there isn't much scope for brilliance. None of the cast has nothing much to gain or lose except Esha, who really seems to need to attend a three-day workshop on 'how to act and still manage to keep your clothes on'. Might do her a world of good. And if that doesn't work, too, she can always go back to the idli-sambar business pioneered by mommy dearest!
Share. Save. Connect.
Tweet
KOI MERE DIL SE... SNAPSHOT
KOI MERE DIL SE POOCHHE SNAPSHOT