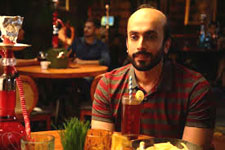 Chaitanya Karthik / fullhyd.com
EDITOR RATING
4.5
Performances
Script
Music/Soundtrack
Visuals
6.0
3.0
6.0
5.0
Suggestions
Can watch again
No
Good for kids
Yes
Good for dates
Yes
Wait to rent it
No
A story like that of Ujda Chaman is predictable in the sense that you know it's going to start with people laughing at the expense of someone's looks and will end with a message that one needs to look beyond looks. It's the journey that the audience are curious about, and that is why they head for the theatres. But the way that journey has been depicted in Ujda Chaman will leave you, well, scratching your head for a good two hours, if not tearing your hair out.

It's not a surprise that there are jokes written on the baldness of the protagonist, Chaman Kohli (Sunny Singh). What is surprising is that the movie has only two jokes. One, being called "Takla", "Ujda Chaman", "Ganja" etc. Two, being bald decreasing your chances of getting married. The same two jokes run throughout the course of the movie. Although it is funny in the beginning, the humour starts wearing you out soon and you want to move on from the jokes to the actual story. But the script doesn't, and by the intermission, you realize that nothing of consequence has actually happened.

Also, Apsara Batra (Maanvi Gagroo) shows up just a minute before the intermission, and that's when you know that the movie will also be dealing with obesity and body shaming. And since the movie aims at being funny, mostly with jokes centred on obesity. But then again, you have the same two jokes: being called "moti", and being fat reducing the chances of getting married.

The second half is basically an interplay between bald guy jokes and fat girl jokes, and is tedious. By the time the story reaches the point where it clears its throat and is about to deliver its message of "looks should not matter", you do not care for any of the characters. By this point in the story, too much has been thrown in - comedy, prejudices, romance, comedy, emotion, comedy, pain, comedy, comedy, stereotypes... If only it was all a proper mix. The emotional scenes would probably have worked better had the writers not served us an overdose of the same two jokes, and had instead invested time in penning subtle nuances that could have established a connection between the characters and the audience.

As far as the performances are concerned, it feels like the actors were already restrained by a myopic script. I may not be that handsome but I want my wife to be beautiful, Chaman says in the movie, and he stays true to it - all he does all through is try to get a girl, and that leaves little scope for character development. Sunny Singh has to maintain only one expression (a sad, unintelligent face) throughout the movie - that he cannot carry an entire film on his shoulders is evident right from the beginning. The scenes involving Maanvi Gagroo had a lot of potential to actually tackle the issues the movie is about, but no, you don't deserve that. All you deserve are two jokes that are devoid of any sensibilities. The rest of the cast has nothing much to do except for being too loud.

The music doesn't really help the story, with the songs sounding like the music director was not all that invested in this one. The visuals are decent, but a movie like this one is hardly about that. What should ideally have been the USP of the movie - the emotions - do not have the slightest impact on you.

This is a story that only pretends to be funny. There was a lot of potential to experiment and deliver something really interesting for the issues Ujda Chaman wants to deal with - sadly, the movie fails completely at that. Don't watch this one unless you have the habit of laughing at the same meme for a solid two hours.
Share. Save. Connect.
Tweet
UJDA CHAMAN SNAPSHOT 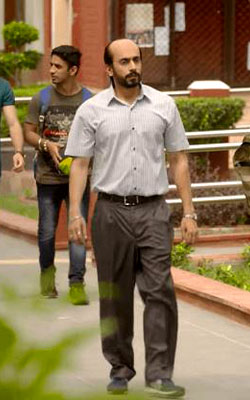 ADVERTISEMENT
This page was tagged for
ujde chaman full movie
Ujda Chaman hindi movie
Ujda Chaman reviews
release date
Sunny Singh, Maanvi Gagroo
Follow @fullhyderabad
Follow fullhyd.com on
About Hyderabad
The Hyderabad Community
Improve fullhyd.com
More
Our Other Local Guides
Our other sites
© Copyright 1999-2009 LRR Technologies (Hyderabad), Pvt Ltd. All rights reserved. fullhyd, fullhyderabad, Welcome To The Neighbourhood are trademarks of LRR Technologies (Hyderabad) Pvt Ltd. The textual, graphic, audio and audiovisual material in this site is protected by copyright law. You may not copy, distribute, or use this material except as necessary for your personal, non-commercial use. Any trademarks are the properties of their respective owners. More on Hyderabad, India. Jobs in Hyderabad.