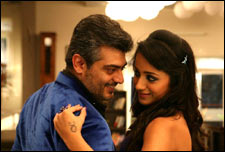 Harika Vankadara / fullhyd.com
EDITOR RATING
2.0
Performances
Script
Music/Soundtrack
Visuals
6.0
4.0
4.0
6.0
Suggestions
Can watch again
No
Good for kids
No
Good for dates
No
Wait to rent it
Yes
I am a madman, says Ajith Kumar's character in Gambler, and the rest of the movie seems to be a systematic attempt to justify that statement and follow suit. Gambler (Mankatha in Tamil) is Ajith's 50th film, a fact which is perhaps the only reason his fans might want to cut the movie some slack for being set in the medieval ages.

Gambler is a film whose script was inspired by the recent spate of cricket betting and global-level gambling. However, the title is the only aspect of the movie that is even remotely connected to gambling - a bummer, considering the fact that its promos promise Las Vegas-style action.

The film revolves around a 40-year-old suspended cop Vinayak Mahadev (Ajith), who is addicted to smoking and drinking, and is prone to bringing home women he promptly forgets, in a drunken stupor. Sanjana (Trisha), a politico's daughter, is a typical pretty damsel who loves Vinayak, paunch and all.

The movie then expands to include 4 adrenaline-driven men who decide to take the highway to wealth by stealing Rs. 500 crores that was smuggled into Mumbai to exchange betting hands once the IPL final match concludes.

A politico's sidekick Sumanth (Vaibhav), an unethical SI Ganesh (Ashwin Kakumanu), the brains of the group Prem (Premji Amaren) and Mahat (Mahat Raghavendra) hatch a plot that is guaranteed to earn them a lifer in jail. Unbeknownst to the group, Vinayak chances upon their plan, and extends a helping hand to the group, with the intention of keeping the loot to himself.

Anti-Corruption Police officer Prithviraj (Arjun) steps into the fray, and helps make the movie slightly engaging. The rest of the movie is an extended Road Runner episode, with everyone trying to get the better of everyone else, without any success.

Gambler is reported to have worked wonders at box offices in Tamil Nadu and abroad. However, its performance at the AP box-office is destined to be miserable. Trisha and Arjun are the only stars in it with a respectable fan following in the state, and unfortunately for Gambler, they are no longer the crowd-magnets they once were.

Gambler is a film with a comprehensive script but lamentable direction, and feels like watching a biologist put together good DNA to produce a fugly cross-breed. If you manage to keep yourself from dozing off (it is a film that makes you expect the end credits at interval time), you will notice that the audience is misled into leaving the hall a good 5 minutes before the movie actually ends, thus missing the final twist in the story. The film does not lack exciting sequences, but they are too few and far apart.

Ajith plays his age, with his rotund waistline and a receding hairline, but his strong voice adds an element of charm to his character that saves him from being a forgettable part of his 50th film. Trisha does nothing but look pretty and serve as a model for Indian and western wear. Arjun steals the show with his screen presence. Premji and Ashwin come across as actors who will not fail to deliver.

Most of the frames of the movie are close-ups, and whatever backgrounds have been chosen in the rest are quite appealing. The songs, however, deserve no recommendation.

Skip this film, unless you can think of something better to do with it.
Share. Save. Connect.
Tweet
GAMBLER SNAPSHOT

ADVERTISEMENT
This page was tagged for
gambler movie realized date Telugu
Gambler telugu movie
Gambler reviews
release date
Ajith, Trisha
Follow @fullhyderabad
Follow fullhyd.com on
About Hyderabad
The Hyderabad Community
Improve fullhyd.com
More
Our Other Local Guides
Our other sites
© Copyright 1999-2009 LRR Technologies (Hyderabad), Pvt Ltd. All rights reserved. fullhyd, fullhyderabad, Welcome To The Neighbourhood are trademarks of LRR Technologies (Hyderabad) Pvt Ltd. The textual, graphic, audio and audiovisual material in this site is protected by copyright law. You may not copy, distribute, or use this material except as necessary for your personal, non-commercial use. Any trademarks are the properties of their respective owners. More on Hyderabad, India. Jobs in Hyderabad.