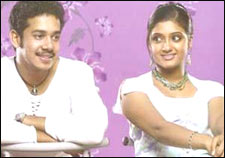 February 14 is yet another dubbed film from the Tamil stable – they’re now doing it at the rate of 2 per week (even Dheerudu released today, and, by the way, makes this one look like a work of art). The math must be working out – judging by the pace at which they are doing it and the quality, our guess is that it costs about Rs. 500 to dub a film from Tamil to Telugu, so if they sell about 20 tickets of Rs. 30 each, they make a profit. It seems to be a risk worth taking.

If you do not know of Bharat, he’s the same guy who has the same 2 expressions and the same kind of role in every film. Check Premisthe, Maha, Gaayam and now this one. He is a traditional small-town guy, loves a woman, cannot get her till the end, and usually dies. In between, he hardly talks, and shows exactly 2 expressions – one lost one, and one uncertain smile. Sometimes you think he deserves his fate. And if you go to his films to sit through all of that, you deserve yours.

Yes, Bharat seems to mean tragedy, and February 14 is not different – he doesn’t get the heroine until the very last frame, and bores the death out of you with the same selfless love schtick all over again. Siva (Bharat) comes from a small town in interior Tamilnadu (oh sorry, interior AP) to Bangalore for under-graduate studies, and falls in love with Pooja (Renuka Menon) at first sight.

Pooja has been in the US all her life and come to India to do her under-graduate studies, staying with her grandparents. They become friends, but she has no feelings beyond that for him. In addition, she is an American at heart, and cannot appreciate the Indian culture, practises or standard of living, while Siva can barely speak English and knows nothing about the West.

His love however makes him take up all the things that she likes – her tastes in music, clothes and sports – and he hangs around with her despite the fact that she keeps saying there is no one in India that she likes. This is the problem with all of Bharat’s films – he doesn’t entertain you as a hero who can get his way. He is always a struggler, a loser. We do not go to films to see losers – there’s the real world for that.

One day when Pooja’s college project criticizing India is booed, she decides to quit and head back for the states, booking her ticket for the 14th of February. Siva decides that she needs to have some reason to stay back in India, someone who she likes enough for that, and so creates a fictitious pen-friend for her called Mr. X who writes letters to her praising her.

Pooja slowly falls in love with the mysterious Mr. X, and cancels her returning. Only, she asks Siva to help with uniting them, putting him in a major quandary – he hadn’t factored her falling in love with Mr. X.

The film is too slow, too un-entertaining, and, most of the time, too two – there are only the 2 main characters in 90% of the scenes. Since it is all about a loser who simply doesn’t seem to be able to make any headway, there is nothing to cheer anywhere.

Bharat does well, given that he does only these roles. He is a Shankar protégé, and this film is also by a Shankar protégé, so he must have been a natural choice. All performances are good, but the comedy involving Vadivelu is too lowbrow. The film also looks glossy, showing the indirect Shankar effect.

This one will vanish in a week or two, so miss it at your own risk.
Share. Save. Connect.
Tweet
FEBRUARY 14 SNAPSHOT

ADVERTISEMENT
This page was tagged for
February 14 telugu movie
February 14 reviews
release date
Bharat, Renuka Menon
theatres list
Follow @fullhyderabad
Follow fullhyd.com on
About Hyderabad
The Hyderabad Community
Improve fullhyd.com
More
Our Other Local Guides
Our other sites
© Copyright 1999-2009 LRR Technologies (Hyderabad), Pvt Ltd. All rights reserved. fullhyd, fullhyderabad, Welcome To The Neighbourhood are trademarks of LRR Technologies (Hyderabad) Pvt Ltd. The textual, graphic, audio and audiovisual material in this site is protected by copyright law. You may not copy, distribute, or use this material except as necessary for your personal, non-commercial use. Any trademarks are the properties of their respective owners. More on Hyderabad, India. Jobs in Hyderabad.