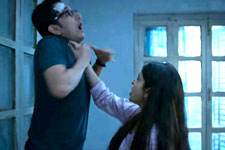 Daphne Rose / fullhyd.com
EDITOR RATING
6.0
Performances
Script
Music/Soundtrack
Visuals
7.0
5.0
8.0
8.0
Suggestions
Can watch again
No
Good for kids
No
Good for dates
No
Wait to rent it
No
Stories, or horror stories in particular - of good versus evil; demons, sprites and enchantresses; djinns and faeries - have long formed part of the collective conscious of communities across the world, making themselves felt despite barriers of language. Is it any surprise then that such movies, never mind which corner of the globe they come from, find a ready audience wherever they go (A Tale Of Two Sisters, I'm looking at you)?

It's plain unfortunate then that despite a ready market and tomes upon tomes of rich source material, the Indian film industry continues unabashed in churning out the most lame rip-offs in the name of "horror". Gothic houses because that's where the action is - or so world cinema tells us - eerie-looking hill stations, Catholic rituals to a target audience that's overwhelmingly, well, not-Catholic (and not-interested either)... the works.

But bunking all of that for once, praise be, is this little dumpling of a movie called Pari, that subverts all the tried-and-tested tropes of the Indian horror movie genre to give you something fairly fresh. Set in Kolkata, it is the story of the chance encounter of Arnab (Parambrata Chatterjee) with Rukhsana (Anushka Sharma), and the events that unfold thereafter. To give away more would be to take away from your movie-watching experience, but what we can divulge is that the mood through most of the movie is decidedly sombre, and if you don't mind a film that works in fits and bursts, then Pari is quite the alright ride.

Indeed, there's plenty to love in this horror story, with top honours going to its visuals and BGM. The DoP does a splendid job in transforming Kolkata's liveliness to something morbid and morose. Each scene, whether shot in the jungle, in Arnab's apartment or elsewhere, has a distinct blue-grey tinge to it that works to suck the colour out of the frame, leaving you with a definite sense of flatness. The BGM, too, plays its part to the fullest in constantly drumming up your sense of foreboding and fear. Together, the two create some genuinely spine-chilling moments that will have even the toughest of nuts looking away.

In the performances department, Parambrata Chatterjee and Rajat Kapoor put in a strong turn, with Kapoor taking the cake in terms of sheer believability. The character actors, too, are adequate in their parts, and provide solid support to the main three. Plus, as mentioned earlier, it is good to see a movie looking for inspiration closer home, with its demonology and ghostbusting tactics more in sync with the folklore originating out of the sub-continent.

But where there's plenty to love, there's also plenty to dislike in terms of exactly how everything plays out on the big screen. Director Prosit Roy, who it turns out was an AD in another fairly decent Bollywood horror flick from recent times Ek Thi Daayan, attempts to correct the faults of the latter in this one. But while ETD started out strong only to end up with a childish climax, Pari suffers the exact opposite fate with too much convolution in the first half and too much information in the second, making it seem like a rushed attempt to get things explained and sorted. Neither does it help that the weak screenplay is actually affected further by the biggest curse of them all - songs. Proper Bollywood songs that, no matter how soft, greatly affect the pacing of the film, and leave you restless and wanting to hit the fast forward button already.

Then there's the matter of Anushka herself. As a producer and actor, kudos to the woman for trying something offbeat with each new outing. But courage alone does not guarantee results, and we see that with the leading lady's performance in the film. There are scenes, actual horror scenes, in which she looks more impish than horrifying, and others in which her antics are downright laughable. You see her earnestness and you applaud her for it, but you also sense that this was a role that would've been elevated in the hands of another performer. A classic case of a star overshadowing her own character and, regrettably, not the other way around.

Ultimately then, despite it being a strictly average horror film, we're giving Pari an extra star purely for sheer audacity in trying something new and for its technical finesse. Watch it for a distinct subcontinental/folklore-ish addition to the horror movie genre (and make sure you don't have impossibly high standards while at it). You're likely to enjoy it while it lasts.
Share. Save. Connect.
Tweet
PARI SNAPSHOT 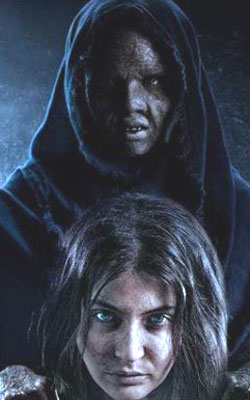 ADVERTISEMENT
This page was tagged for
Pari hindi movie
Pari reviews
release date
Anushka Sharma, Parambrata Chatterjee
theatres list
Follow @fullhyderabad
Follow fullhyd.com on
About Hyderabad
The Hyderabad Community
Improve fullhyd.com
More
Our Other Local Guides
Our other sites
© Copyright 1999-2009 LRR Technologies (Hyderabad), Pvt Ltd. All rights reserved. fullhyd, fullhyderabad, Welcome To The Neighbourhood are trademarks of LRR Technologies (Hyderabad) Pvt Ltd. The textual, graphic, audio and audiovisual material in this site is protected by copyright law. You may not copy, distribute, or use this material except as necessary for your personal, non-commercial use. Any trademarks are the properties of their respective owners. More on Hyderabad, India. Jobs in Hyderabad.