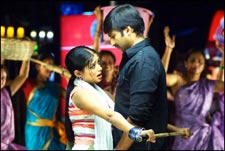 Deepa Garimella / fullhyd.com
EDITOR RATING
7.0
Performances
Script
Music/Soundtrack
Visuals
8.5
5.5
7.0
7.0
Suggestions
Can watch again
Yes
Good for kids
No
Good for dates
Yes
Wait to rent it
No
The trick, ultimately, is to give your audiences reason enough to postpone that bathroom break right until the end. If you've mastered that one, you deserve every decibel of your accolades.

Like most Puri Jagannath movies, the plot of this one is simplistic, and moves just from A to B, un-distracted but with a clear sense of purpose. But indisputably, you have to give it to the man to be able to make a straight line seem fleshed out - so fleshed out it feels less like the video game sequence that it really is, and more like the movie that it finally is.

Golimaar is the story of an encounter specialist (possibly the reason why Ram Gopal Varma was thanked in the opening credits), Gangaram (Gopichand). Gangaram is an orphan who has scrimped away his childhood at a tea-stall owned by (M S Narayana), all the while dreaming of becoming a police officer.

Having been appointed SI as an adult, he's brave, honest and incredibly capable. His skills prompt his boss (Nasser) to convert him into an encounter cop, and he is assigned the task of finishing off every gangster in the city (led by Shawar Ali). Further, he must also kill a highly influential don (Kelly Dorjee) who operates from Malaysia.

Golimaar has nothing ground-breaking in terms of the plot. You've seen this way back before people watched too many cop films and started using the word "encounter" in easy sentences ("nannu encounter chesestava?"). In any case, with a title like "Golimaar" it's almost ridiculous to expect audiences to come expecting, well, anything other than what they're expecting. However, the film is courteous enough to get the formula right without fooling around.

First up, Puri Jagannath knows how to frame his leading men. Gangaram is a well-constructed hero - saviour of the world and its honour, and yet not too larger than life. And Gopichand's act consists of pretty much all the right moves to bring him to life.

Then, the dialogues are cracklingly smart and witty, and here, too, Gopichand is a reasonably good vehicle to rouse those lines to life. In most parts of the movie, it is the dialogues that gloss up the otherwise unidimensional characters and situations. Also, the romance - that mostly forms the "comic" track - is pretty endearing.

What goes wrong is the done-to-death villainy and the super-predictability of the script. Fortunately, the flaws are covered up by the quick-wittedness of the dialogues - an exercise that the makers manage to accomplish in almost every scene.

Gopichand, like we said, is half the reason Golimaar is a fun watch. And it helps greatly that he is macho in a very real, approachable way. Priyamani as Pavitra is brilliant, and save for a slightly distracting non-Telugu accent - she's clearly dubbed for herself - she brightens up the script. Thankfully, this film doesn't have a wishy-washy romance, and the lead pair's chemistry isn't wasted.

Roja flashes in from time to time in a rather blazing role as Pavitra's man-hating mom, but her character grows on you mainly because of the run-ins she has with Gangaram. Ali comes in pretty late and is hardly a comic relief, but M S Narayana fills in a part of the dedicated humour track.

Chakri has done a better job of the background score than of the songs, matching beat by beat the fast pace of the flick. The technical values are pretty upscale, and though not extravagant, they're enough to help the movie along. The action is of the no-nonsense kind, and conflicts get quickly sorted out with alarming pointedness thanks to the omnipresence of guns.

On the whole, we'd recommend this for an easy popcorn jaunt if not much else.
Share. Save. Connect.
Tweet
GOLIMAAR SNAPSHOT

RATING
5
meghu on 10th Jun 2010, 4:00pm | Permalink
Time & Money waste
Phaneendra Pappu on 4th Jun 2010, 12:20am | Permalink
What a crap! This is Ab tak Chappan re visited or you can say a reversal of Puri's very own Pokiri. I expected some decent film for Puri. But a total waste of time and effort. Priyamani was utterly wasted in this film.

And Fullhyd's reviews have lost the charm. Either you need to write a review with the true worth or loose the visitors...

ADVERTISEMENT
This page was tagged for
golimaar review
telugu golimaar full movie
Golimaar telugu movie
Golimaar reviews
release date
Follow @fullhyderabad
Follow fullhyd.com on
About Hyderabad
The Hyderabad Community
Improve fullhyd.com
More
Our Other Local Guides
Our other sites
© Copyright 1999-2009 LRR Technologies (Hyderabad), Pvt Ltd. All rights reserved. fullhyd, fullhyderabad, Welcome To The Neighbourhood are trademarks of LRR Technologies (Hyderabad) Pvt Ltd. The textual, graphic, audio and audiovisual material in this site is protected by copyright law. You may not copy, distribute, or use this material except as necessary for your personal, non-commercial use. Any trademarks are the properties of their respective owners. More on Hyderabad, India. Jobs in Hyderabad.