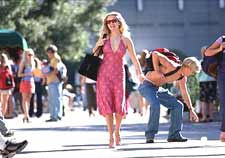 Ghazala Rizvi / fullhyd.com
EDITOR RATING
3.0
Performances
Script
Music/Soundtrack
Visuals
NA
NA
NA
NA
Suggestions
Can watch again
NA
Good for kids
NA
Good for dates
NA
Wait for OTT
NA
Do blonds have more fun? They may or may not, but you never came prepared for the movie to be one of those brilliant ones scintillating in the comic zone, anyway. Not with the dancing 'n' prancing lithe Reese Witherspoon in trendy pinup poses. You need not have, too, for the flick is all but that.

Born a brunette, Reese Witherspoon is 'Legally Blond' even though she didn't use a license for the peroxide conversion. The story goes this way. Elle Woods (Reese Witherspoon) is on a roller coaster drive towards marital bliss - or so she thinks - with Warner Huntington (Mathew Davis). But Warren's ambitions proclaim her too blond for his future. For he has to follow legacy and the Senate seat, which absolutely cannot be tarnished golden.

Warner leaves for Harvard Law School, and Elle nurses her wounded heart at the local manicurist's. Now any woman who has approached a beauticians' under similar circumstances would vouch for the effect that a pocket-hole-drilling hearty makeover brings. Spirits uplifted, Elle decides to pursue Law - and Warren - into Harvard.

She sits for LSAT, and also submits a personal profile video highlighting her achievements as a fashion grad at Harvard (which included designing a range of 'Bio-Fur' panties) and also as a campus social event organizer (which shows her hysterical at a Ricky Martin show). The board of admissions is awestruck by Elle's bikinis, and she is shown the red carpet.

On the very first day, Elle is kicked out of class, her teacher's first impression being that she is dumb as a blond. Another shock awaits her when she discovers Warren engaged to the politically-correctly-colored Vivian Kensington (Selma Blair).

Together, Vivian, Warren and the others among the smart and the uprights of the class play numerous pranks on Elle. She is invited to a costume party, and makes her appearance in bunny ears and a tail attached to her back.

Her blond woos are appeased by Emmet (Luke Wilson), who is an associate in a big law firm. Emmet not only gives Elle a rundown on the idiosyncrasies of each of her professors, but also encourages her to use her talent - the hard-earned talent of being blond - for doing good to the world.

Another essential trip to the manicurists and beauticians ensures that Elle lands up with a plum assignment with Professor Callahan's law firm. She has to assist him along with Warren and Vivian in a murder trial. The accused, Brooke Taylor (Ali Larter), being a blond herself, bonds readily with Elle. And through such sparks of washed down brilliance as director Robert Lukelie can manage, Elle solves the case single-handedly.

The producers of this flick obviously thought that reducing the racist problem of the world to a colorful tinge would make for good comedy. Unfortunately, the only thing that gets reduced is your patience. The widely-spaced attempts at gags fall short of even mediocrity. And Elle's character in the Marilyn Monroe versus Jackie Kennedy role, instead of being stupidly comical, comes out to be pathetically stupid.

The verdict - blondes can be just as insipid as brunettes. And scriptwriters should find some better ways to harass viewers.
Share. Save. Connect.
Tweet
LEGALLY BLONDE SNAPSHOT

ADVERTISEMENT
This page was tagged for
Legally Blonde english movie
Legally Blonde reviews
release date
Reese Witherspoon, Mathew Davis
theatres list
Follow @fullhyderabad
Follow fullhyd.com on
About Hyderabad
The Hyderabad Community
Improve fullhyd.com
More
Our Other Local Guides
Our other sites
© Copyright 1999-2009 LRR Technologies (Hyderabad), Pvt Ltd. All rights reserved. fullhyd, fullhyderabad, Welcome To The Neighbourhood are trademarks of LRR Technologies (Hyderabad) Pvt Ltd. The textual, graphic, audio and audiovisual material in this site is protected by copyright law. You may not copy, distribute, or use this material except as necessary for your personal, non-commercial use. Any trademarks are the properties of their respective owners. More on Hyderabad, India. Jobs in Hyderabad.