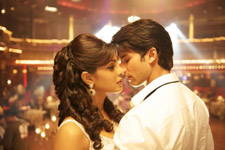 Samrat Sharma / fullhyd.com
EDITOR RATING
6.0
Performances
Script
Music/Soundtrack
Visuals
9.0
2.0
6.0
6.5
Suggestions
Can watch again
No
Good for kids
No
Good for dates
Yes
Wait to rent it
Yes
Oof, this could have been terrible, but for the leads. Kunal Kohli has an uncanny propensity for taking existing films and twisting their meaning around in his Yash-Chopra-addled brain, churning out soulless and cynical products. Let not Teri Meri Kahaani change that opinion - this is a thoroughly by-the-numbers made film with an extremely cold eye to make money, but the one thing Kohli did right was to cast right.

Shahid Kapoor and Priyanka Chopra, playing different characters from different eras, though equally ill-defined, elevate the pedestrian writing and loose direction to salvage key moments - they are what make his film mildly enjoyable, and it is not a mean feat.

It shouldn't really work. The pacing is utterly wrong - the film is all over the place in its mood template, and it never actually recovers from the start-stop pacing of the sometimes languid and sometimes breakneck plot. The writing is hackneyed and clichéd, and induces eye rolls at an alarming pace. One of the Shahids is explained to love bad shayari, and the entirety of the dialog appears to have been written by him.

The less said about the direction the better - the actors are operating on very loose emotional cues, with no idea about character, milieu, motivation at all. The tone varies greatly throughout, and you never quite get the sense of the characters and how they work.

Despite these almost insurmountable odds, the two leads make the most of it, and save the day to quite an extent. It is enjoyable to see them have a good time on screen, laughing and singing their way through three different stories set in 1960, 2012 and 1910, in order.

None of the treatments is authentic or even novel, but the leads add their own touches to all three couple each, and make you have a good time. The 2-hour film greatly benefits from having these actors who understand what popcorn fare means, and they do their damnedest to entertain.

The 1960 story is the highlight of the film - Shahid channels everyone from Dev Anand to Shammi Kapoor, alternating between a down-to-earth, na?ve soul and a wild, carefree fun monster. Priyanka's turn as the repressed but snooty actress is also her best of all 3 incarnations.

In 2012, the story is punctuated with technology, but nothing about it is novel or even interesting, its 2 people using iPads and Facebook for a romance that always feels insincere. 1910's Lahore is the film's chance to be rambunctious and loud, and though the songs are truly that, you never actually get to like the rakish Shahid all that much. It's still all fun though, at least till the stories end.

I'd give Kunal Kohli props for casting right, but the truth is that the choice was also very mathematical - drawing actors who'd guarantee a box office return. That he chooses not to do anything with them while they continue to make the most of it, is telling in how much Indian cinema at times relies on star power. It's not a bad film, but could have been worse had the actors not decided to give it their all.
Share. Save. Connect.
Tweet
TERI MERI KAHAANI SNAPSHOT 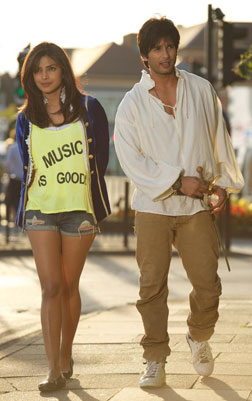 ADVERTISEMENT
This page was tagged for
teri meri kahaani full movie
Teri Meri Kahaani hindi movie
Teri Meri Kahaani reviews
release date
Shahid Kapoor, Priyanka Chopra
Follow @fullhyderabad
Follow fullhyd.com on
About Hyderabad
The Hyderabad Community
Improve fullhyd.com
More
Our Other Local Guides
Our other sites
© Copyright 1999-2009 LRR Technologies (Hyderabad), Pvt Ltd. All rights reserved. fullhyd, fullhyderabad, Welcome To The Neighbourhood are trademarks of LRR Technologies (Hyderabad) Pvt Ltd. The textual, graphic, audio and audiovisual material in this site is protected by copyright law. You may not copy, distribute, or use this material except as necessary for your personal, non-commercial use. Any trademarks are the properties of their respective owners. More on Hyderabad, India. Jobs in Hyderabad.