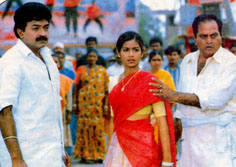 Anil Reddy / fullhyd.com
EDITOR RATING
5.0
Performances
Script
Music/Soundtrack
Visuals
NA
NA
NA
NA
Suggestions
Can watch again
NA
Good for kids
NA
Good for dates
NA
Wait to rent it
NA
That Telugu movies have reached an all-time low is proved by the fact that Ramanaidu has come out with something like this. Agreed, the storyline is message-oriented, but it is so oft repeated that the only reaction it elicits off you is sleep. The comedy is downright vulgar, and just goes to show the unpredictability of the censors. And the music by Sri Lekha is so ordinary, it makes you think even you could have done better!

As for the story, it's the same old one of a good guy taking on a bunch of goons single-handedly. That apart, his part-time vocation seemingly is reforming the society in a novel manner. Shivaiah (Rajashekar) is a village guy who has come to the city for the sake of his sister's education. The friendly neighborhood sweetshop owner has a daughter Sirisha (Sanghavi), who promptly falls in love with Shivaiah impressed by our hero's muscular features.

Now the local market is under the control of the evil Jyothi and his equally evil brother Poorna. As is the ritual, apna hero clashes with them and attempts to terminate their terror. But thanks to a backstabbing friend, his cause is doubted. And in the midst of a whole lot of mindless violence, which leaves our hero half-dead, his sister is raped by these goons.

Enter Roja (Monica Bedi), a police inspector with a mysterious link to Shivaiah's past. Flashback time, folks (yawn). It shows us how he has sacrificed his love to uphold his family honor (double yawn). And then you are suddenly catapulted into the climax, which is half over before you realize that it has begun.

The only saving grace of the movie is Rajashekar. His histrionics are as good here as you are used to. The courtroom climax scene has his best coming out. Sanghavi and Monica Bedi are wasted. Their only work is to dance in the songs, show some flesh and be impressed by the hero's heroics.

Overall, very mediocre stuff and may only be good enough for Rajashekar fans, though we seriously doubt even that.
Share. Save. Connect.
Tweet
SIVAYYA SNAPSHOT

ADVERTISEMENT
This page was tagged for
13 ghosts movie hindi
?????? ?????? ??????
Sivayya
?????? ????????
?????? ??????
Follow @fullhyderabad
Follow fullhyd.com on
About Hyderabad
The Hyderabad Community
Improve fullhyd.com
More
Our Other Local Guides
Our other sites
© Copyright 1999-2009 LRR Technologies (Hyderabad), Pvt Ltd. All rights reserved. fullhyd, fullhyderabad, Welcome To The Neighbourhood are trademarks of LRR Technologies (Hyderabad) Pvt Ltd. The textual, graphic, audio and audiovisual material in this site is protected by copyright law. You may not copy, distribute, or use this material except as necessary for your personal, non-commercial use. Any trademarks are the properties of their respective owners. More on Hyderabad, India. Jobs in Hyderabad.