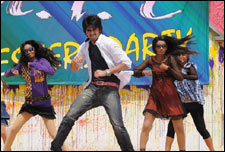 Harika Vankadara / fullhyd.com
EDITOR RATING
1.0
Performances
Script
Music/Soundtrack
Visuals
5.0
1.0
2.0
3.0
Suggestions
Can watch again
No
Good for kids
No
Good for dates
No
Wait to rent it
No
Cricket, Girls And Beer looks like a movie made by a rookie for homework - an assignment that comprises research on crime reports involving frustrated youth, as well as research on the trashiest of movies made in the country. S Umesh Kumar, the director and script-writer of the film, falls pathetically short of understanding teen psychology, and generation gap is no excuse for this failure.

A voice-over at the beginning of the movie informs the film's imaginary audience that Cricket, Girls And Beer is centered on the theme of "man propojes and God dispojes". 5 minutes into the movie, you understand that the phrase has as much importance as its completely inappropriate background music.

Vijay (Adarsh Balakrishna of Iqbal fame) is an aspiring cricketer, and is the oldest of the 3 brothers around who this film is spun. Vikram (Naga Shourya) is the second brother, and his love interest is a beer bottle. Vivek (Surya Tej), the youngest of the 3, is supposed to be a womanizer but turns out to be a hopeless, hot-headed lover boy.

Vivek dates his college-mate Swapna (Sindhu Affan), the daughter of a mining baron, and she is being forced to wed the incorrigible, sadistic son of a Mines Minister. Swapna's beau is also a student of the same college - Mysamma Institute Of Technology (MIT). Before you know it, Vivek and the minister's son are landing fists on each other's faces, and the latter issues a death sentence to Vivek.

A minister who skirts journalists' queries regarding his errant son with stale "you-media-people-blow-everything-out-of-proportion" retorts, a spoilt youngster who is brought up to believe that his will is the world's command, a college Romeo, and a brother baying for blood and justice complete the story.

The story is as fresh as tinned fruit that has travelled across seas for weeks, and barely edible. The wafer-thin plot can be predicted by anyone who has even half a gray cell.

What exactly does the film try to communicate? If it intends to show that youngsters are getting side-tracked from their goals because they give ragging, drinking and flirting more importance than studies, why are Vijay's dreams of making it into the national cricket team included in the list of "distractions"? The conclusion to the story, instead, seems to be that revenge is possible with calm planning and not hot-headedness.

If the script writer had spent even half the time he might have spent on writing the cricket commentary in the film on writing the rest of the movie's dialogues, this would have been a far better product. But it still would be unworthy of hitting a cinema screen.

Adarsh Balakrishna is the only actor who makes an impression on the audience. He seems to be someone who can play supporting characters well, although he falls short of being a bankable actor. Sindhu Affan looks pretty, though not enough to land substantial projects. M S Narayana and the rest of the well-known actors are pitiably underused.

The camera work is extremely shoddy. The technicians are evidently yet to learn of the existence of the focus adjustment rings on their cameras: a hefty part of the video is out of focus. The cameras' movements are jerky enough to give you a head ache. The film is also a fine example of how not to edit a film. The production design is sad as well - for example, a compass has been substituted for the cross-hairs of a "professional rifle" used by a character in the flick.

There is no lip-sync to speak of, and the songs are forgettable.

In sum, this is a film that will not have takers even among TV channels.
Share. Save. Connect.
Tweet
CRICKET GIRLS & BEER SNAPSHOT

ADVERTISEMENT
This page was tagged for
cricket girls and beer movie nagashoyryareview
Cricket Girls and Beer review
Cricket girls and beer full movie download mp4
Cricket girls and beer Telugu full movie download
Girls and beer movie
Follow @fullhyderabad
Follow fullhyd.com on
About Hyderabad
The Hyderabad Community
Improve fullhyd.com
More
Our Other Local Guides
Our other sites
© Copyright 1999-2009 LRR Technologies (Hyderabad), Pvt Ltd. All rights reserved. fullhyd, fullhyderabad, Welcome To The Neighbourhood are trademarks of LRR Technologies (Hyderabad) Pvt Ltd. The textual, graphic, audio and audiovisual material in this site is protected by copyright law. You may not copy, distribute, or use this material except as necessary for your personal, non-commercial use. Any trademarks are the properties of their respective owners. More on Hyderabad, India. Jobs in Hyderabad.