Beauty And The Beast Review 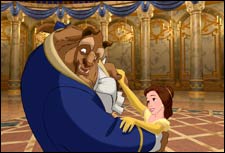 Deepa Garimella / fullhyd.com
EDITOR RATING
8.0
Performances
Script
Music/Soundtrack
Visuals
8.0
7.0
8.0
8.0
Suggestions
Can watch again
Yes
Good for kids
Yes
Good for dates
Yes
Wait for OTT
No
This "tale as old as time" could probably have done without all the 3D revamping. Walt Disney movies of the 20th century continue to be all about sugar and fluff and roses and hearts, and no amount of fascination with expensive technology can possibly overshadow the fact that they're more about the spirit than the edginess.

This 1991 re-re-released film has a story that differs quite a bit from the eponymous fairy tale, but obviously, that carries its essence - charm and message intact. Beast (Robby Benson) was once a spoilt but handsome prince, cursed by an enchantress when he demonstrated his thoughtless nature to her when she knocked at his door in the form of a haggard old beggar woman. He had turned her away because of her appearance.

She turns his servants into household articles, and him into a Beast, and gives him a rose that will bloom only until he turns 21. If he doesn't love another and be loved in return before the rose withers away completely, he will remain a Beast forever.

An eccentric inventor Maurice (Rex Everhart) from a nearby village, lost in the woods, stumbles into Beast's cold castle, and is imprisoned by the totally unwelcoming host. His daughter Belle (Paige O'Hara) comes in looking for him, and offers to take her father's place in order to set the old man free.

The enchanted, symphony-playing household articles egg Beast to be nice to the girl, since she may just be the key to his freedom from the curse. Beast grudgingly growls his way into civility and romance, and Belle starts finding goodness beneath the rough exterior. Meanwhile, Villainy exists in the form of Belle's MCP suitor Gaston (Richard White), who is bitter at having been rejected by her.

This isn't the kind of flick you'd find something wrong with. Nostalgia and the immortality of the Disney touch keep the spell throbbing all throughout the 85 minutes that the film runs for. Beauty And The Beast is a musical, complete with the psychedelic choreography and the frantic orchestras of the old times - nay, this is the old times.

There are fewer smart Aleck moments of humour and silliness, but everyone in the audience has moments. Kids get to laugh at some of the antics of the houseware in the castle - the candlestick, the clock and the tea set - and adults get to drink in the simple romance. And, of course, the overall ambience of the movie being a lesson in virtue makes this a feel-good story right from the start.

3D helps in further animating the whole deal, though the novelty of the effect quickly wears off. Unfortunately, this makes the viewing paraphernalia seem burdensome after the first 10 minutes.

However, take your family, and revisit this one. Vintage Disney can't not be irresistible, even if you have to put on extra gear to enjoy it.
Share. Save. Connect.
Tweet
BEAUTY AND THE BEAST SNAPSHOT

ADVERTISEMENT
This page was tagged for
Beauty And The Beast english movie
Beauty And The Beast reviews
release date
Paige O'Hara, Robby Benson
theatres list
Follow @fullhyderabad
Follow fullhyd.com on
About Hyderabad
The Hyderabad Community
Improve fullhyd.com
More
Our Other Local Guides
Our other sites
© Copyright 1999-2009 LRR Technologies (Hyderabad), Pvt Ltd. All rights reserved. fullhyd, fullhyderabad, Welcome To The Neighbourhood are trademarks of LRR Technologies (Hyderabad) Pvt Ltd. The textual, graphic, audio and audiovisual material in this site is protected by copyright law. You may not copy, distribute, or use this material except as necessary for your personal, non-commercial use. Any trademarks are the properties of their respective owners. More on Hyderabad, India. Jobs in Hyderabad.