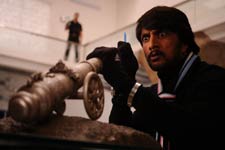 Deepa Garimella / fullhyd.com
EDITOR RATING
8.0
Performances
Script
Music/Soundtrack
Visuals
10.0
8.0
8.5
8.5
Suggestions
Can watch again
Yes
Good for kids
Yes
Good for dates
Yes
Wait for OTT
No
Oh, how much Eega speaks to the skeptics. A Telugu film with a freaking bug as its hero? With a Kannada actor, as the anti-hero, occupying as much screen-time as the fly? A Telugu film without a single star to speak of? A Telugu film which centres around a tragedy (anyone who's not living under a rock knows the hero dies, which is what the fly incarnation is all about)?

Much effort has gone into defining the emotions of the characters, two-dimensional fairy-tale spinoffs as they are, and making them all someone you root for. So much so that the evil Sudeep is not at all sleazy, and is actually enjoyable to be around because his helplessness and vulnerability strike a chord.

Nani is around only for about 20 minutes, but he makes an impact, creating immense recall value as he patiently courts Bindu. Meanwhile, Rajamouli has an incredible amount of fun with Sudeep, who is all over the frame. Sudeep's villain is a man frustrated and maddened by his everyday battles with the pinhead-sized household pest, and the actor portrays a range of emotions rarely seen before in our on-screen baddies. It's a role that we're used to seeing Prakash Raj in; and yet, watching a fresh face, who's also younger and great to look at, play it is a pleasure.

Overall, Eega is a charming movie that deserves a watch, both for its style and its substance. More important, of course, is how Rajamouli has changed the way we look at flies.
Share. Save. Connect.
Tweet
MAKKHI SNAPSHOT 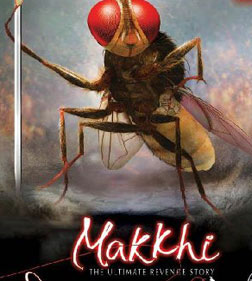 ADVERTISEMENT
This page was tagged for
makkhi hindi movie in
makkhi movie flaws
Makki hindi movi
Makkhi hindi movie
Makkhi reviews
Follow @fullhyderabad
Follow fullhyd.com on
About Hyderabad
The Hyderabad Community
Improve fullhyd.com
More
Our Other Local Guides
Our other sites
© Copyright 1999-2009 LRR Technologies (Hyderabad), Pvt Ltd. All rights reserved. fullhyd, fullhyderabad, Welcome To The Neighbourhood are trademarks of LRR Technologies (Hyderabad) Pvt Ltd. The textual, graphic, audio and audiovisual material in this site is protected by copyright law. You may not copy, distribute, or use this material except as necessary for your personal, non-commercial use. Any trademarks are the properties of their respective owners. More on Hyderabad, India. Jobs in Hyderabad.