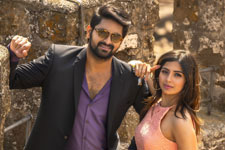 Veturi Sarma / fullhyd.com
EDITOR RATING
4.0
Performances
Script
Music/Soundtrack
Visuals
6.0
3.0
4.0
7.0
Suggestions
Can watch again
No
Good for kids
No
Good for dates
No
Wait to rent it
Yes
If after watching this one you are wondering why the film was called @Narthanashala when the only reference to the classic film was that the lead was forced to act as an effeminate person, then you must have brought your brains along and are trying to use them. The makers of this film encourage neither of them. Still, we are so used to these oddball comedies that we can still indulge the makers if there is something in them to make us actually laugh. Unfortunately, Srinivas Chakravarthy's @Narthanasala doesn't have anything in it to make its audiences excuse its flaws.

Sure, it has got an interesting (of sorts) premise. Radha Krishna (Naga Shaurya) was raised as a girl since his grandfather wanted to see his wife reborn to his son (Shivaji Raja). Radha Krishna grows up to be a saviour for women, training them in self-defense. In a Tollywood-esque turn of events, he saves Manasa (Kashmira Pardesi) from her conman boyfriend (Satyam Rajesh), and the two duly fall in love with each other.

Unbeknownst to the budding lovers, Krishna's father betroths him to Satyabhama (Yamini Bhaskar), the daughter of a fearsome father-son duo of bloodthirsty factionists (Jayaprakash Reddy and Ajay). To turn down the wedding proposal to Satyabhama, Krishna tells everyone that he is gay. Unfortunately, the son (Ajay) turns out to be gay himself, and wants Krishna now.

So, there are the set-up, the conflict and the inevitable resolution. Usually that is enough for most Telugu movies to work thanks to the talent available to write comedy and actors skillful enough to pull that off, but alas, it doesn't all come together this time. They could perhaps make this film a bit better given a second chance, but they get only one chance and they've botched it.

Srinivas Chakravarthy, credited with the story, the screenplay and everything else that goes into the decision-making, comes up with an interesting idea, but has no idea how to go from one point of the film to another. The plot points do come at the right times, but they are all botched up for no rhyme or reason. Scenes are never navigated to the intended revelations, the romance is muted since the director cannot build chemistry between the leads, and the actors work without direction.

It is only towards the second half that things pick up some pace and capability to tickle, but it is too little, too late. It is a pity that the makers couldn't do more with the innovative premise. All of the actors seem capable of delivering the laughs, but the script never provides them enough material to use their skills.

Naga Shaurya would be the first one of them wishing he got more support from the writers. He is one-note all through except when he has to showcase some effeminate facial contortions. It's tragic to watch as he plays along hoping for something that the director never had up his sleeve.

The ladies were probably told that they were not really important to the proceedings, and so don't bother getting into their characters or making you feel for their plight. Jayaprakash Reddy is too loud and only occasionally fun to have around, and Shivaji Raja delivers a rather over-the-top performance.

The visuals (Vijay C Kumar) make things look festive and the editing (Kotagiri Venkateswara Rao) is snappy, but the writers do not give them much to work with.

Narthanasala could have been a better film than this 99 times in 100 attempts, and it's a pity we get the one attempt where it doesn't work.
Share. Save. Connect.
Tweet
@NARTANASALA SNAPSHOT 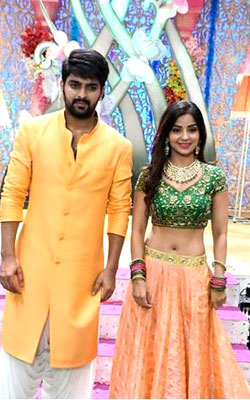 ADVERTISEMENT
This page was tagged for
@Nartanasala telugu movie
@Nartanasala reviews
release date
Naga Shaurya, Yami Bhaskar
theatres list
Follow @fullhyderabad
Follow fullhyd.com on
About Hyderabad
The Hyderabad Community
Improve fullhyd.com
More
Our Other Local Guides
Our other sites
© Copyright 1999-2009 LRR Technologies (Hyderabad), Pvt Ltd. All rights reserved. fullhyd, fullhyderabad, Welcome To The Neighbourhood are trademarks of LRR Technologies (Hyderabad) Pvt Ltd. The textual, graphic, audio and audiovisual material in this site is protected by copyright law. You may not copy, distribute, or use this material except as necessary for your personal, non-commercial use. Any trademarks are the properties of their respective owners. More on Hyderabad, India. Jobs in Hyderabad.