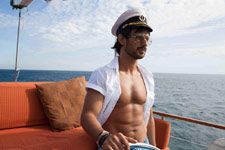 Swayamsrestha Kar / fullhyd.com
EDITOR RATING
4.0
Performances
Script
Music/Soundtrack
Visuals
4.0
3.0
3.5
4.5
Suggestions
Can watch again
No
Good for kids
No
Good for dates
No
Wait to rent it
Yes
Movies incite different kinds of responses from people. While some go on to pledge life-long allegiance to Amitabhji, others decide to spend their whole lives waiting for Raj/Simran. Then, there are movies which make us fume with righteous fury. These are the bad ones, the ones which cannot be rescued from the bottomless pits of mediocrity into which they were chucked by their makers.

Warning (3D), on the other hand, is a movie that leaves us utterly unaffected. It isn't worth gushing about, nor is it particularly bad. It is average at its best, and sloppy at its worst. We were left struggling to name the feeling that we ended up with after the movie was over, and we could come up with only one word.

Okay, so it's not a proper word per se, but it manages to articulate and hold within its sparse confines, what we felt after watching the movie.

Four school friends - Anshul (Varun Sharma), Sabrina (Manjari Phadnis), Gunjan (Madhurima Tuli), Aman (Sumit Suri) and Bakshi (Santosh Barmola) - reunite on a yacht. Sabrina brings along her hubby and her baby girl, now that she's married. There's a slight tension between her and erstwhile sweetheart Bakshi, who by the way, is totally chilling out with his girlfriend de francaise.

The yacht sets off, and all is hunky-dory in the world of babes, bikini and champagne - right until the time when all six of them jump into the waters for a swim. Well, five of them actually. Sabrina is acutely aquaphobic, and is unceremoniously (without her consent) dumped into the water by Tanveer.

Hmm... we're getting why she isn't married to Mr. Sensitivity there and is instead playing happy houses with her staid and reliable husband.

After all of them are in the water, trouble begins as realisation dawns that they can't get back on the boat. We'd rather not say why because that would be giving some of the plot away and there isn't a lot of it to begin with.

Sometime towards the interval, we catch a glimpse of a shark fin, and our interest perks up and sniffs the air expectantly. But the second half only serves to lull us back into that state of semi-attention, and semi-ennui whereby we peer at the screen listlessly, and fiddle with our 3D glasses.

And in the meantime, the six-some try their best to get back onboard, however, "unke koshishon par paani phir jata hai". We're really proud of that quip.

As time passes, people start panicking, go delirious, hurl invectives at each other, break out into fits of hysteria, and have cardiac arrests. All the while, we are led to believe that (a) shark/s is/are circling them serenely. Probably waiting for all that drama to stop.

The script isn't original at all, and the director, Gurmeet Singh, rips off scenes and situations from the Hollywood movie "Open Water 2". There's almost nothing in Warning's plot that hasn't been stolen (yes, we shall freely use that word. We pay for novelty of vision, not unapologetic plagiarism) from the aforementioned film.

Though the film starts of well, it quickly slips into the territory of "Eh? What's new there?" pretty fast. The cinematography gets some brownie points though, for some unconventional camera angles in a few frames, coupled with shots of the vast expanses of water everywhere, thus lending to the film a sense of desolation.

But then, the characters intervene, and we are reminded that this is Bollywood, and that therefore, there shall be songs. "Bebasi" keeps playing in the background while these people are thinking of ways to survive their ordeal. The whole thing is ridiculous, but predictable, thus managing to not surprise us, or disinterest us at the same time. We placidly gaze at the screen, waiting for all that soulful crooning to end.

The 3D is again, predictably under-utilised. The makers of Chhota Chetan had made more of an effort that the makers of this watery spectacle.

The performances are mediocre. Manjari Phadnis, Varun Sharma, and Santosh Barmola show slight promise, while the rest are forgettable and forgivable (for agreeing to do the movie).

In the end, Warning (3D) carries opinions about itself in its title. Be warned, lest you emerge into the sunlight after two and a half hours, feeling all... meh.
Share. Save. Connect.
Tweet
WARNING (3D) SNAPSHOT 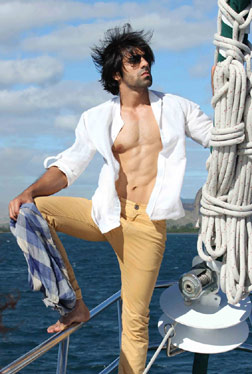 ADVERTISEMENT
This page was tagged for
warning 3d hindi dubbed movies
Warning (3D) hindi movie
Warning (3D) reviews
release date
Santosh Barmola, Suzana Rodrigues
Follow @fullhyderabad
Follow fullhyd.com on
About Hyderabad
The Hyderabad Community
Improve fullhyd.com
More
Our Other Local Guides
Our other sites
© Copyright 1999-2009 LRR Technologies (Hyderabad), Pvt Ltd. All rights reserved. fullhyd, fullhyderabad, Welcome To The Neighbourhood are trademarks of LRR Technologies (Hyderabad) Pvt Ltd. The textual, graphic, audio and audiovisual material in this site is protected by copyright law. You may not copy, distribute, or use this material except as necessary for your personal, non-commercial use. Any trademarks are the properties of their respective owners. More on Hyderabad, India. Jobs in Hyderabad.