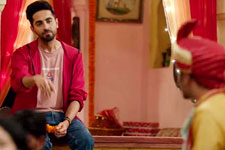 Chaitanya Karthik / fullhyd.com
EDITOR RATING
7.0
Performances
Script
Music/Soundtrack
Visuals
8.0
7.0
6.0
7.0
Suggestions
Can watch again
No
Good for kids
Yes
Good for dates
Yes
Wait for OTT
No
In the time that most actors take between a release and the announcement of their next project, Ayushmann Khurrana graces the silver screen, leaves his mark, restores our faith in Bollywood and silently moves on to another movie. And he does all of that without resorting to the formulae that Bollywood thrives on and without ever repeating his roles. The string of hits that started with Bareilly Ki Barfi will likely continue, and let's all bask in its glory while we can.

Characters who are homosexual have always been used to extract derisive laughter, and they try their best to make us feel that homosexuals are weird people who don't deserve the same respect that others do. Occasionally we are blessed with movies like Aligarh that are searingly honest in their depiction of homosexual characters to remind you that all hope is not lost. Shubh Mangal Zyaada Saavdhan, thankfully, is another one of those, and reminds us that there is nothing wrong with homosexuality.

The movie begins on a great note, with both the leads Kartik (Ayushmann) and Aman (Jitendra) chasing a train to reach Allahabad (a subtle shoutout to one of the most iconic scenes in the history of romantic movies - DDLJ), where they have to deal with the daunting task of getting the approval of Aman's orthodox parents (Gajraj Rao and Neena Gupta).

Kartik (Ayushmann) and Aman (Jitendra Kumar) are in love with each other and are living together in Delhi. Aman is yet to talk about his sexual orientation to his parents, who live in Allahabad. Kartik had already told his father about his orientation and faced the brunt of it, and therefore the idea of being laughed at and ridiculed doesn't bother him. He is optimistic that their love will be able to convince Aman's parents, but Aman dreads the very idea of sharing his secret with them. How Aman's parents react and how the duo manage to squeeze acceptance out of them forms the rest of the narrative.

The story is not a hard-hitting take on homosexuality. Instead, it uses satire to drive home its message. The humour it offers doesn't emanate from the leads being gay or their endearing relationship, but from the reactions of the ones around them, who have a hard time trying to come to terms with their love. Not once while watching the elegant love between the lead pair does it feel like you're watching something that's not a deviant from the usual relationships that we are ready to embrace, and it's this normalising of the characters that adds credence to the story.

However, the biggest strength of the film is its brilliant cast. Ayushmann delivers an impressive performance - which isn't really a surprise - as the assertive and flamboyant Kartik, who wears his heart on his sleeve and is ready to go the distance for the sake of his love. He has some great one-liners, and his slow-motion entries really light up the screen. Is there anything that this man cannot do? He is extremely comfortable, and not once does he seem out of place.

Those who are familiar with Jitendra's work through his TVF videos know how good an actor he is, and he conveniently hogs the limelight with his portrayal of the practical and grounded Aman, who reminds us of ourselves and all the battles of acceptance all of us deal with. You just have to watch the scene where he comes out to his parents and uses chemical terms like dopamine in an effort to convince them, to know that he's the one who steals the show at the end of the day.

Jitendra and Ayushmann have incredible chemistry, and the personal moments they share are the soul of the story.

Gajraj Rao is hard to hate, and is likeable despite his character's arc. He stands out every time he shows up on screen, and it's difficult to ignore the presence and gravity he brings along with him. Neena Gupta is the perfect partner in crime for him, and although the pair don't have the same chemistry they did in Badhai Ho, they are great together nevertheless.

What don't work for the movie are its slow narrative and the focus being more on the constant infighting in Aman's family than on the lead pair's love. Also, the movie gets a tad too melodramatic at times, and the climax is something that has been done many times and ends up bringing down the energy of the film. Besides, the movie tries desperately to be funny at times even though it isn't warranted, and this brings down its essence slightly. Save for these reasons, it's a fairly good product.

The music and cinematography are good in aiding the film, though the editing could've been better. At least 20-25 minutes in the second half of the movie could've been trimmed to make for a more convenient viewing.

Shubh Mangal Zyaada Saavdhan is more about homophobia than it is about homosexuality. As far as delivering the message it tries to convey goes, it manages to do a good job despite its flaws. This is not a story about two gay characters in love - it's about love in its purest form.
Share. Save. Connect.
Tweet
SHUBH MANGAL ZYADA SAAVDHAN SNAPSHOT 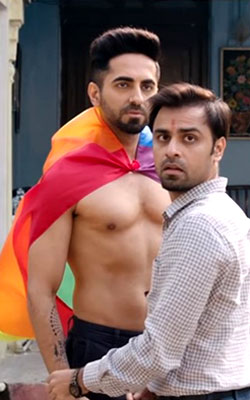 ADVERTISEMENT
This page was tagged for
shubh mangal saavdhan movie in hindi 3gp movie
Shubh Mangal Zyada Saavdhan hindi movie
Shubh Mangal Zyada Saavdhan reviews
release date
Ayushmann Khurrana, Jitendra Kumar
Follow @fullhyderabad
Follow fullhyd.com on
About Hyderabad
The Hyderabad Community
Improve fullhyd.com
More
Our Other Local Guides
Our other sites
© Copyright 1999-2009 LRR Technologies (Hyderabad), Pvt Ltd. All rights reserved. fullhyd, fullhyderabad, Welcome To The Neighbourhood are trademarks of LRR Technologies (Hyderabad) Pvt Ltd. The textual, graphic, audio and audiovisual material in this site is protected by copyright law. You may not copy, distribute, or use this material except as necessary for your personal, non-commercial use. Any trademarks are the properties of their respective owners. More on Hyderabad, India. Jobs in Hyderabad.