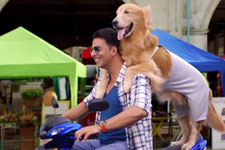 Nupur Barua / fullhyd.com
EDITOR RATING
4.0
Performances
Script
Music/Soundtrack
Visuals
6.0
4.0
5.0
5.0
Suggestions
Can watch again
No
Good for kids
Yes
Good for dates
No
Wait to rent it
No
Let's be honest - when you saw the trailers of Entertainment, you already knew the type of movie it would be. So there are only two reasons that would make you buy a ticket to watch it - either you are fanatical about Akshay Kumar, or you are a dog lover / animal rights activist / sucker for cute furry faces.

Urban culture in India these days includes a pet or two, and that is acceptable to most people across the country. Go to a smaller town, and you will find that household pets are pretty much left to their own devices, and that they are hardly allowed inside the bedroom. Rural culture will appreciate animals for their uses, but they will never understand all the fuss made over them. So then the makers of a movie that revolves around a dog getting the better of a superstar may not have considered most of the country as the potential audience.

Not that Indian cinema has not had its share of animals monopolising the limelight. Remember Haathi Mere Saathi, Mard etc? Teri Meherbaniyan is the ultimate tear jerker for a pet lover. But Entertainment is none of the above.

Akhil Lokhande (Akshay Kumar) has always had a tough life (read: no money). His father (Darshan Jariwala) is an ailing man, and Akhil has to make ends meet as well as pay the hospital bills. Life is an unending uphill struggle, till he discovers, quite by chance, that his real father, the man who left his mother high and dry, is a billionaire named Panna Lal Johri (Dalip Tahil).

This is exciting news for Akhil, and for his best friend, Krishna (Krishna Abhishek). Coincidentally, Panna Lal passes away, quite suddenly. Akhil decides to claim what is rightfully his, and takes Krishna with him to Bangkok, where Panna Lal used to live.

When Akhil walks into the estate, with supreme confidence, he meets with Habibullah (Johnny Lever), who now runs the estate. Akhil declares his right over Panna Lal's assets, only to be told that Panna Lal has left all his property to somebody else - Entertainment (Junior), the Golden Retriever who has been a faithful companion.

Akhil does not know how to handle this, and thus plans to get rid of Entertainment. Krishna plays along. In the meantime, there is Sakshi (Tamannaah Bhatia), who is obsessed with Indian television soap operas, and her father (Mithun Chakraborty) who wants his daughter to marry a billionaire. Entertainment, for the father, is a desirable son-in-law. There are also two bromantic villains, Karan (Prakash Raj) and Arjun (Sonu Sood), who have their own designs on the property. In short, Akhil is not the only one who has his eyes on Entertainment.

The movie is a comedy. Period. Actually, a slapstick comedy. The directors are the dialogue writers for many Rohit Shetty movies, and the influence is apparent in not only the story, but also in the characters. Each one is a stand-alone stand-up act, and not always funny. Actually, the OTT humour is the most predictable and monotonous aspect of the movie.

There are, however, dialogues that can bring a smile to your face, even if you are determined to be stoic about the slapstick. Akhil and Krishna feel the need to insert a film star in all their dialogues, and some of them are innovatively entertaining. What may seem disturbing to some however is the constant reference to violence, and it being made to look funny (Johnny Lever with many knives stuck in him, for example). Also, the plans that the two friends make to get rid of the dog (and thankfully fail) are supposed to be hilarious, but they sound chillingly cruel.

The underlying message is clear - a dog is a man's best friend. What is added to this is the idea that a dog deserves to live in a dignified manner (although those are human standards we are speaking of here - big houses, comfortable beds, servants). The story, however, has been put together in a hurry, or so it seems, and has absolutely no cohesion. Scenes jump from one situation to another, and even the bizarreness of these events cannot be considered great elements for a screenplay.

Akshay Kumar flip-flops between being a comic actor and a hamming artiste. There is no doubt that he has good comic timing, but sometimes even the most ordinary dialogue seems painful for him. This is definitely not his best performance, and he is easily outdone by Junior, the dog.

Junior has one expression - of shocked indifference. Somehow, it works in every sequence. And he is a calming effect after the various contortions that Krishna Abhishek displays on his face - he is deafeningly loud, but that may make him very popular, given the brand of humour that the country prefers these days.

Prakash Raj and Sonu Sood are cardboard villains, and they are effective in their portrayals. There are no surprises. Johnny Lever is always a pleasure to watch, even with his over-the-top facial expressions - maybe because he is a familiar figure in Indian films, since Krishna Abhishek is at once irritating when he tries the same.

Like most Rohit Shetty movies and others of their ilk, the production design does not concentrate on the aesthetics as much as on the garishness and obscene scales. Ditto for the costumes. The movie has a lot of special effects, and most of them are not too well done. The camera work is therefore patchy, in most places. As is the editing. The music is not very impressive, either.

If you are neither an Akshay Kumar fan nor a dog lover (although how the latter is possible is beyond us), worry not. You can still watch the movie - provided you have nothing else to do and want to take some kids along to make their day. Kids may like this film, because it is not too serious, and you will find them rooting for Entertainment. Might just be a good lesson to the young minds to let them know that animals, too, have feelings.

Either way, it cannot harm anybody to watch Entertainment, thus increasing ticket sales, and therefore increasing the chances of more animal movies being made (hopefully with better stories).
Share. Save. Connect.
Tweet
IT'S ENTERTAINMENT SNAPSHOT 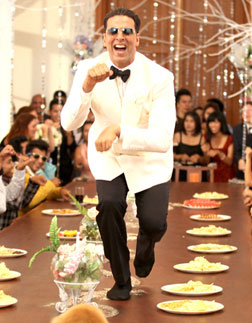 ADVERTISEMENT
This page was tagged for
It's Entertainment hindi movie
It's Entertainment reviews
release date
Akshay Kumar, Tamannaah Bhatia
theatres list
Follow @fullhyderabad
Follow fullhyd.com on
About Hyderabad
The Hyderabad Community
Improve fullhyd.com
More
Our Other Local Guides
Our other sites
© Copyright 1999-2009 LRR Technologies (Hyderabad), Pvt Ltd. All rights reserved. fullhyd, fullhyderabad, Welcome To The Neighbourhood are trademarks of LRR Technologies (Hyderabad) Pvt Ltd. The textual, graphic, audio and audiovisual material in this site is protected by copyright law. You may not copy, distribute, or use this material except as necessary for your personal, non-commercial use. Any trademarks are the properties of their respective owners. More on Hyderabad, India. Jobs in Hyderabad.