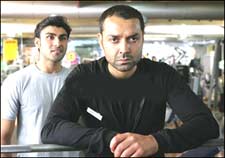 Samrat Sharma / fullhyd.com
EDITOR RATING
3.0
Performances
Script
Music/Soundtrack
Visuals
5.5
3.5
3.0
7.0
Suggestions
Can watch again
No
Good for kids
No
Good for dates
No
Wait for OTT
Yes
Bobby Deol wants to redeem himself. His macho posturing and brainless choices in films having been increasingly shunned by the audiences, he has started on a path where he is making an effort to be a quality actor. Taking a leaf from brother Abhay's book, he is signing up for offbeat and unique directors with interesting projects. Nanhe Jaisalmer, I am told was a step in the right direction.

Chamku, written and directed by Kabeer Kaushik, the man behind the superlative procedural Saher, is meant to be another step on the path to redemption in asking for our forgiveness for Bichhoo. Unfortunately for poor Bobby, this is not that film.

Time will tell if Chamku becomes a cult film with a steady following, because it certainly has a sense of brooding intelligence apparent. Scratching beneath the surface, though, brings to light a film completely stuck in a time when violence and bad dialogue was what it took to be a hit. Where pandering to the front benchers was the norm, and any sense of intelligent narrative was scoffed at.

Chamku is a movie that fails in creating an atmosphere, thereby laying waste any subtext that may have been there on paper. The inclusion of crowd-pleasing moments and item numbers does not bode well for a film that was meant to be a study of the internal conflict of men of violence.

The simple, rote story is symptomatic of the larger problem evident with Chamku - an unhealthy fixation with formula. Revenge sagas, one thought, had been left behind. Well, it is fairly more original than that - Chamku is the son of a farmer killed by an evil Thakur, and raised by Naxalites in Bihar. When the police capture him and his friends, he is taken in a covert government operation to kill enemies of the state. Chamku goes through the motions killing everyone he is ordered to. Complications arise when his girlfriend gets pregnant, and when he meets the Thakur again.

See? Interesting. Yet the film leaves that entire plot behind and plows through on the revenge angle solely and relentlessly, possibly in order to focus on Bobby The Hero as opposed to the actor. All the scope he might have had to emote goes right out the window with one fell swoop of the magic decision to eschew all narrative for gunfights.

The film remains fascinatingly watchable as it flits between a raw revenge exploitation pic and a Carpenter pastiche, but those may be flashes I saw, hoping for something more. Despite the well-shot action and the fascinating staging, the movie has all the depth of a flat tile.

This might be partly due to the fact that this is a Deol production. All the subplots that may have been covered by a strong ensemble are eschewed in favor of More Bobby on screen. Even if that means Danny Denzongpa and Ritesh Deshmukh have blink-and-you-miss-'em parts, and Arya Babbar goes the way of a low paid extra.

More Bobby is also a problem for the film's pacing as it removes all the interesting bits that would need those actors assembled, and adds in a lot of brooding and glorifies the revenge plot way beyond what would have been healthy. The end product is a movie that feels conceptualized by the likes of Guddu Dhanoa and left for Kaushik to direct.

It's an interesting film, if you stretch your magnanimity enough, and may yet find a cult following by people who probably still have love for Kabeer Kaushik, but I can't rightly recommend this huge pile of ego massage to anyone. You'd do well to stay away from this one unless you have a strong gun fetish. And even then you're better off staying the hell away.
Share. Save. Connect.
Tweet
CHAMKU SNAPSHOT

ADVERTISEMENT
This page was tagged for
Chamku hindi movie
Chamku reviews
release date
Bobby Deol, Priyanka Chopra
theatres list
Follow @fullhyderabad
Follow fullhyd.com on
About Hyderabad
The Hyderabad Community
Improve fullhyd.com
More
Our Other Local Guides
Our other sites
© Copyright 1999-2009 LRR Technologies (Hyderabad), Pvt Ltd. All rights reserved. fullhyd, fullhyderabad, Welcome To The Neighbourhood are trademarks of LRR Technologies (Hyderabad) Pvt Ltd. The textual, graphic, audio and audiovisual material in this site is protected by copyright law. You may not copy, distribute, or use this material except as necessary for your personal, non-commercial use. Any trademarks are the properties of their respective owners. More on Hyderabad, India. Jobs in Hyderabad.