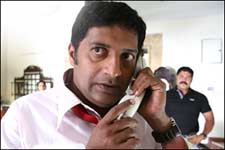 Deepa Garimella / fullhyd.com
EDITOR RATING
4.0
Performances
Script
Music/Soundtrack
Visuals
5.0
5.0
4.0
5.0
Suggestions
Can watch again
No
Good for kids
No
Good for dates
No
Wait to rent it
No
A teenager, a rich dad, a bunch of unsuspecting friends stumbling into a decrepit warehouse doubling as a gangster's den - sounds like a decent enough kidnap mystery for Tollywood. But add three dozen more characters, lots of TV actors (who you would never recognize unless you spent all your evenings watching Tamil serials), Tamil dialogues every twenty minutes (as a result of this ambitious 'bilingual' project), a do-gooder cop (with not a single example of what good he did), three (or were there four?) completely forgettable songs, lots of groping (the warehouse, silly!) in the dark, and anything else you can think of, and it may not turn out to be as exciting as you thought.

Okay, since the plot is one thing this film offers, we leave you the pleasure of discovering it for yourself.

Saroja's first half hangs limp without substance and purpose, and you fail to make sense of so many characters being introduced. Just when you're starting to lose interest in the tale, Mr. Director stuns you, sets your heart racing, makes you want more - and declares the interval. Clever move, indeed.

Then, when you start actually feeling the thrill, when you start wanting to know whodunit, you sit it out. But soon, you start to groan at all the dragging along. The dialogues get cornier, the comedy is too contrived, the killings get grotesque and meaningless, and the action gets noisier, but you brave it out - a few minutes more, you tell yourself. Poor you. For if you do get to the end, you will want to weep at the injustice of it all. You will regret having even given the movie a chance.

But like we said, we will not rob the movie of its one saving grace. The other saviours are Prakash Raj and S P Charan, who turn out to be the most sensible and believable characters around. Sadly, we can't say the same of Srihari.

The makers of Saroja must be given credit for having shot the film almost entirely in the dark, and pulling it off really well. Credit also goes to the script-writer for having tried to make the dialogues and situations realistic. There are a couple of moments that may be called intense or stomach-squirming, depending on how you look at it. One is when the girl's dad picks up her school dress, which is the only evidence that the kidnappers leave. The other is something the villain says, that is seemingly harmless but dripping with lecherous intent - "Saroja super undi." Chilling and repulsive, yes - Sampath's done a great job.

More importantly, kudos to the writers for having maintained a semblance of a plot, even amidst a score of wannabe sub-plots - an initial goon-beating exercise by Srihari (you will never get to know why), a failed love interest, a nagging wife, an aspiring school band singer, a completely arbitrary Brahmanandam, an accident on the highway, a philandering husband, and many more. There are so many threads left untied that you feel cheated at having endured them all.

That's not all. You want to mute the four lead characters because you can't bear their inane conversation. You want to cry foul at the choreographer for having aped Om Shanti Om's multi-cameo song (unfamiliar TV faces don't impress us, by the way). You want to go behind the scenes and teach the director some geography (Nalgonda lies nowhere near the Chennai-Hyderabad highway). You want to fast-forward the movie, go to the credits and find out who the hero actually was, among all those unkempt men.

Oh, did I mention the ladies? One's there just to get engaged to one of the unkempt men. The other's there for the 'sizzle' effect and a song.

Watch Saroja only if you have lots of spare time and even more patience.
Share. Save. Connect.
Tweet
SAROJA SNAPSHOT

RATING
6
KrisRay on 9th Sep 2008, 1:52pm | Permalink
I haven't read such a confused reviewer in ages... one of the worst written reviews on Fullhyderabad.com.
BTW, hey Editors, have you noticed the drastic fall in 'user ratings' by Hyderabadis of late? Earlier, Hyderabadis used to 'wait' for FullHyd's take on every new movie and discuss the review at length with many people participating enthusiastically. But now, there are many many reviews with not even one user review. Time to do some thinking.... isn't it?


Pros: the movie
Cons: this review

ADVERTISEMENT
This page was tagged for
saroja darling in Telugu
Saroja telugu movie
Saroja reviews
release date
Srihari, Prakash Raj
Follow @fullhyderabad
Follow fullhyd.com on
About Hyderabad
The Hyderabad Community
Improve fullhyd.com
More
Our Other Local Guides
Our other sites
© Copyright 1999-2009 LRR Technologies (Hyderabad), Pvt Ltd. All rights reserved. fullhyd, fullhyderabad, Welcome To The Neighbourhood are trademarks of LRR Technologies (Hyderabad) Pvt Ltd. The textual, graphic, audio and audiovisual material in this site is protected by copyright law. You may not copy, distribute, or use this material except as necessary for your personal, non-commercial use. Any trademarks are the properties of their respective owners. More on Hyderabad, India. Jobs in Hyderabad.