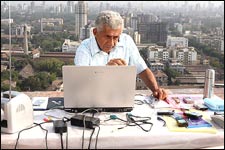 EDITOR RATING
7.0
Performances
Script
Music/Soundtrack
Visuals
9.0
6.0
7.0
8.0
Suggestions
Can watch again
No
Good for kids
Yes
Good for dates
Yes
Wait to rent it
No
A Wednesday might have been a marvellous movie.

For many, it anyway is. It certainly gets most basics right - an unrelentingly gripping plot, sterling performances and dialogues, and the stamp of contemporary Bollywood class in production quality. So when the movie is done and your blood is still gushing in your veins, you'll clap with an enthusiasm you reserve for rare moments that you couldn't predict would happen just a half-hour earlier. Which is payback in itself, given the average Bollywood movie.

Only, with the most important challenge - explaining the modus operandi of the protagonist, whose main line is that any aam aadmi can do what he did - it doesn't even bother. Where did he get RDX, how did he pick up complicated ways of routing cell phone calls that need professional hackers to decode, how did he land SIMs in the names of criminals dead months back (and where did he get all his data from), how did he plant rigged benches in an aviation base? And just how did he do all this in a month's planning, and where did he get all the money the whole operation needed?

Indeed, the script, at the end of it all, is pure BS. And that's what makes us say "might have been" instead of "is". Sure, it's not like we expect logic in our films, but A Wednesday is all about logic - it's a plot-centric movie as opposed to being one from the Dream Factory genre or a star-studded entertainer, and if the plot is unconvincing in this genus, it violates the basic payoff. Indeed, when at the end of the movie you can't marvel at the genius of it all, what's the fun of a script-centric thriller?

A Wednesday deals with a terror threat received by the Mumbai Police Commissioner Prakash Rathod (Anupam Kher) that there are 5 bombs in Mumbai city about to go off in 6 hours, and the caller (Naseeruddin Shah) tells him to release 4 terrorists to ensure the bombs don't go off. The Commissioner, a man of undisputed efficiency and integrity, gets his best men on the job of tracking the caller, but it all leads them nowhere, and it's a battle he finally loses as the criminals have to be given up. Then suddenly, something totally unexpected happens.

The film keeps you riveted to the screen from frame 1 to when the credits roll, and Anupam Kher and Naseeruddin Shah are so good, you can't think of who else could have done those roles. You can't fault many performances in Bollywood films these days, and this one gets the best out of its entire crew, including the Naina Roy (Deepal Shaw) and her Electric Baba. It's a taut thriller, and that means there are no songs gatecrashing the flow.

A Wednesday's main payoff is that you go in with no expectations given that you never heard of this movie until the day of release, and that makes the whole experience doubly impressive. The critics will want to praise it since it meets their main criteria - it's different, and it's low budget (refer Aamir) - and combined with the fact that it's actually good, it will send them into raptures. For almost everyone, nit-picking about improbability will be acting holier-than-thou.

Oh well, so be it. You deserve a good movie - it's not everyday that you get one from the Bollywood stables.
Share. Save. Connect.
Tweet
A WEDNESDAY SNAPSHOT


Pros: Performances of the entire cast
Cons: Can't think of any

RATING
8
Shashank on 8th Sep 2008, 8:11am | Permalink
Go and Watch this movie. One of the best Hindi.. sorry Indian movies in a long long time. AWESOME.

ADVERTISEMENT
This page was tagged for
A Wednesday hindi movie
A Wednesday reviews
release date
Anupam Kher, Naseeruddin Shah
theatres list
Follow @fullhyderabad
Follow fullhyd.com on
About Hyderabad
The Hyderabad Community
Improve fullhyd.com
More
Our Other Local Guides
Our other sites
© Copyright 1999-2009 LRR Technologies (Hyderabad), Pvt Ltd. All rights reserved. fullhyd, fullhyderabad, Welcome To The Neighbourhood are trademarks of LRR Technologies (Hyderabad) Pvt Ltd. The textual, graphic, audio and audiovisual material in this site is protected by copyright law. You may not copy, distribute, or use this material except as necessary for your personal, non-commercial use. Any trademarks are the properties of their respective owners. More on Hyderabad, India. Jobs in Hyderabad.