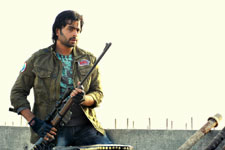 Kritika Deval / fullhyd.com
EDITOR RATING
3.5
Performances
Script
Music/Soundtrack
Visuals
4.0
3.0
5.5
5.0
Suggestions
Can watch again
No
Good for kids
No
Good for dates
No
Wait to rent it
No
"And the rest is history..."

If only these had been the words with which this movie had begun... But then, if only Jimmy Choos grew on trees... If only the Hyderabad Traffic Police used their brains once in a while... If only one could pig out without ending up resembling one... The world of "if onlys" has no bounds.

And, hence, we have Okkadine, a study in the science of inducing soporifia, broken only by the equally mind-numbing stupidity of what can only laughably be called "plot devices".

Like just about every other Telugu movie, this one is about revenge. How? You won't find out until the second half. And, we wouldn't want to spoil your "Oh f***" moment by telling you, if by any chance little green men have captured your brain cells and have commanded you to watch this movie.

The rest, however, goes somewhat like this. Sailaja (Nithya Menon) goes to stay at a farmhouse on the outskirts of Vizag along with a friend she met online (Snigdha). There she meets Surya (Nara Rohit) under mysterious circumstances, and goes on to become extremely close to his family, to the extent that she randomly runs to their home late at night from her remote and lonely farmhouse, via an equally remote and lonely clearing through a dense forest.

That piece of inanity aside, Sailaja and Surya fall in love with each other in a span of five days. Understandable. Those five days seem like an eternity driven by maudlin sentiment, lame music, and remarkably robotic acting by Rohit.

So, anyway, five days later, Surya proposes to Sailaja, who calls up her super-rich, super-powerful NRI businessman and aspiring politician father, and confesses her love. Imagine our shock when, instead of giving us the known evil of parental opposition, he goes all out to assure her that she can marry whoever she wants.

You see, the much awaited interval isn't here yet. So, you're on tenterhooks to see what other horrors the script could hold in the name of that pre-interval "twist".

And then, all of a sudden, the twist is here, and you realise that it's time for you to go bang your head against the nearest sharp surface. Only, your average multiplex seat is generally too comfortable for you to want to move, unless, in this case, it is to get the out of the theatre.

The makers of this snail-on-half-a-bottle-of-Piriton-paced number pride themselves on having kept the length to a short and sweet 2 hours and 13 minutes. Perhaps they could've gone a step ahead and given us just 13 minutes, with only Nithya Menon on screen, whose adorable presence is the only factor that keeps souls (like us) who cannot walk out partway, sane.

Nara Rohit tries valiantly to emote, and fails just as miserably. The action sequences are ridiculous, and absolutely devoid of any "Wow!"-factor, if that's what you're looking for. The rest of the cast, including Kota Srinivasa Rao, Chandramohan and the wonderful Sudha, try to salvage the plot as best as they can, but are defeated by its relentless refusal to move ahead.

The music by singer-turned-composer Karthik shows obvious influences from his mentor A R Rehman, if influence is the right word. It is alright, though. You wouldn't change the frequency if you came by one of these songs on FM.

The cinematography is acceptable at best, and summary at worst. The editor, we will hold a grudge against for a long time.

Okkadine is a vendetta flick that rather bullheadedly refuses to stray into the lush fields of logic, and does nothing else to make up for its outlandishness. 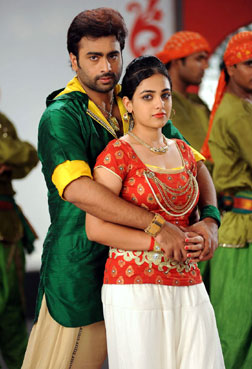 ADVERTISEMENT
This page was tagged for
Okkadine telugu movie
Okkadine reviews
release date
Nara Rohit, Nithya Menon
theatres list
Follow @fullhyderabad
Follow fullhyd.com on
About Hyderabad
The Hyderabad Community
Improve fullhyd.com
More
Our Other Local Guides
Our other sites
© Copyright 1999-2009 LRR Technologies (Hyderabad), Pvt Ltd. All rights reserved. fullhyd, fullhyderabad, Welcome To The Neighbourhood are trademarks of LRR Technologies (Hyderabad) Pvt Ltd. The textual, graphic, audio and audiovisual material in this site is protected by copyright law. You may not copy, distribute, or use this material except as necessary for your personal, non-commercial use. Any trademarks are the properties of their respective owners. More on Hyderabad, India. Jobs in Hyderabad.