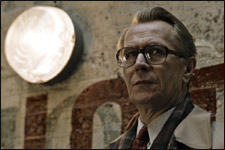 Nupur Barua / fullhyd.com
EDITOR RATING
8.0
Performances
Script
Music/Soundtrack
Visuals
8.0
9.0
8.0
7.0
Suggestions
Can watch again
Yes
Good for kids
No
Good for dates
No
Wait for OTT
No
It is a universally accepted fact that the British cannot be beaten when it comes to writing spy stories. And John Le CarrÃ© is the master of the genre. It helps that he worked as with MI5 and MI6 as an intelligence officer, of course, but the day he decided to retire from active duty and become a full-time author, the world of espionage literature changed permanently.

Tomas Alfredson, best known for Let The Right One In, was the obvious, albeit unconventional choice to direct a movie based on one of CarrÃ©'s best works, Tinker Tailor Soldier Spy. Who else could have portrayed the grey, cold and positively emotionless world that the characters of CarrÃ©'s novel inhabit? Incidentally, this is Alfredson's first English language movie as a director (he is Swedish).

The title of the film comes from a counting rhyme (along the lines of "Eeny Meeny Miny Moe") that children in England use for games. In the movie, Tinker, Tailor, Soldier and Poor Man are the code names for the suspected, short-listed intelligence officers, one of whom is likely to be a double agent.

It is 1973, and the whole planet is still caught up with the Cold War. The Chief of the British Intelligence, Control (John Hurt), sends one of his best agents, Jim Prideaux (Mark Strong), to Budapest, to obtain essential information from a Hungarian General. Jim is shot, the mission is declared a disaster, and Control and his right-hand man, George Smiley (Gary Oldman), are forced to retire in disgrace.

The raucous but honest Control dies shortly after this incident, probably in disappointment. About a year later, it comes to light that the main objective of Jim's mission was to uncover the name of the mole in the British Intelligence.

Undersecretary Oliver Lacon (Simon McBurney) asks Smiley to carry out a secret investigation to find out if there is, indeed, a double agent working in the British Intelligence (also known as the "Circus"), and to identify him.

Smiley is not surprised that he himself is one of the suspects, codenamed Spy, in Control's list. In fact, very little surprises him as he begins his research, with the assistance of a young agent, Peter Guillam (Benedict Cumberbatch). As he becomes more involved in the complicated maze that reeks of corruption and unpatriotic traitors, he is haunted by the memories of a meeting that took place almost 2 decades ago - between him and the Russian spy master, Karla. Smiley is convinced that Karla has a role to play in all of this.

The writers of the screenplay have remained as true to the novel as possible. To deviate too much from the original story would have been nothing short of sacrilegious. The fact that the author is also one of the executive producers of the movie may have something to do with the way the novel was translated into a script.

The disadvantage, then, is the length of the feature. Many details and clues have been left out, but to somebody who has not read the book, the movie is a complete package.

The actors lend credibility to the story and setting, by sheer virtue of their skills. Each artiste outperforms his co-stars, and brings to life the mannerisms and quirks of men who lived through the Cold War. The only wasted talent in the movie is Stephen Graham, who has very little screen-time, and a relatively irrelevant role.

Most of the scenes were shot at abandoned army barracks in North London. The film was also shot in Budapest and Istanbul, both cities known for their timeless architecture and old-world charm. There are no bright colours or jazzy editing, and although the production design is meticulously detailed, it remains in the background, and does not distract from the main narrative.

The only problem with Tinker Tailor Soldier Spy lies with its pace. For younger audiences used to the slick MI4: Ghost Protocol and Don 2 in recent times, this flick may be a bit of a drag. Also, the jargon used in the movie may confuse the audience. The movie is unabashedly cerebral, and should be watched only by die-hard fans of the espionage genre.

This is the first of a trilogy of the George Smiley Vs Karla story, and the makers will announce the next 2 movies soon, hopefully.

If you're a discerning spy-thriller aficionado, then you cannot afford to give this one a miss.
Share. Save. Connect.
Tweet
TINKER TAILOR SOLDIER SPY SNAPSHOT

ADVERTISEMENT
This page was tagged for
Tinker Tailor Soldier Spy english movie
Tinker Tailor Soldier Spy reviews
release date
Gary Oldman, Colin Firth
theatres list
Follow @fullhyderabad
Follow fullhyd.com on
About Hyderabad
The Hyderabad Community
Improve fullhyd.com
More
Our Other Local Guides
Our other sites
© Copyright 1999-2009 LRR Technologies (Hyderabad), Pvt Ltd. All rights reserved. fullhyd, fullhyderabad, Welcome To The Neighbourhood are trademarks of LRR Technologies (Hyderabad) Pvt Ltd. The textual, graphic, audio and audiovisual material in this site is protected by copyright law. You may not copy, distribute, or use this material except as necessary for your personal, non-commercial use. Any trademarks are the properties of their respective owners. More on Hyderabad, India. Jobs in Hyderabad.