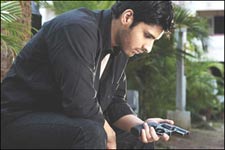 EDITOR RATING
4.0
Performances
Script
Music/Soundtrack
Visuals
7.5
7.0
7.0
7.5
Suggestions
Can watch again
No
Good for kids
No
Good for dates
No
Wait for OTT
Yes
Mani Shankar has gone on record stating that anybody who doesn't like Mukhbir can ask for his money back. Only, asking for your money back after watching Mukhbir is like asking for your money back for discovering that life sucks. Truth is non-refundable.

Mukhbir, literally meaning spy, is a seemingly well-researched tale of an informer for the Indian intelligence who infiltrates crime rings and passes key information to the cops who then act upon it. If you are one of the legions who never understood what the term intelligence that you constantly come across in the papers means, here's more than a wikipedia explanation. And it's tense and poignant enough to make you decide that you'd be less apologetic of your life if you pulled off something like that for your motherland yourself.

Kailash (Sammir Dattani) is an orphan who gets into police custody in his teens for no fault of his, and is bailed out by Inspector Rathore (Om Puri) of the intelligence department in return for turning a spy who will join crime rings and pass on information. The film starts with what Rathore tells Kailash will be his last assignment - joining the gang in Hyderabad of Mamu (Alok Nath) and keeping tabs on his no. 2 henchman Pasha (Sushant Singh).

The sequences in Hyderabad showcase what, unfortunately, for most locals is vindication of what they are only too willing to believe - that the old city is a hub of crime and seditious activity. When a key lieutenant of the ring Mustafa is killed in an encounter, Pasha discovers that there is a mole in his gang, and brutally tortures Rathore to find out who, but Rathore will not talk, which results in his painful death, and right in front of Kailash's eyes.

Kailash wants revenge against the gang to make up for his helplessness as his mentor was traumatized and killed, and when Inspector Rahman (Suniel Shetty) introduces himself to him as Rathore's successor, offers to enter the mother gang in Mumbai. Only, this one is much tougher since this gang will not allow a non-Muslim to come anywhere near them, and Kailash has to do the unthinkable to infiltrate them and pass their lie detector tests - convert to Islam, body, mind and soul.

It's a tale of sheer courage hereon, as Kailash - now Shehzad Khan - constantly flirts with chilling danger in the den of crime. He soon realizes that the gang is not merely into smuggling but is planning something far greater, and that the intelligence department itself has sold out to them. And when Rahman is killed, too, he's all alone, facing a numbing truth.

As while watching any tale of human courage, you can't help wondering if you would have been as resolute in the same situation yourself, but, well, when you are actually in a situation like that, courage is not an option but the course that suggests itself naturally - since there really is nothing else to do. Indeed, actually being a mole in a crime ring is not as scary as the prospect of being one. Plus, Kailash has a couple of advantages - this is his only goal, and he has no bonds.

That however might still not be enough comfort to take your mind away from thoughts of how inadequate your life would be if you did not do something like that once, and that is the main draw of Mukhbir - it's a thriller at the end of the day, overshadowing notes of emotion, religion and patriotism. And it becomes just an average thriller because of the same reason - as a thriller, it's not top drawer. It's slow, it's not written for the masses, and there's no starcast or heroine - or, actually, hero. It's all script. That's, in India, unfortunate.

The performances are top-notch. The film is devoid of songs, but has plenty of religious references in it - the villians are all Muslims, the film is full of the orthodox practices of the religion, and there are the expected visionary plans to blow up a huge city and kill thousands of innocents, and Mani Shankar tries to avoid antagonizing the community through an innovative twist in the end.

Mukhbir scores points for being an entirely different and a well-researched film with insights into how intelligence and terrorist groups work, but, unfortunately, little when seen from the entertainment perspective. But if you're planning an adventure of a lifetime before you die, here's a good start.
Share. Save. Connect.
Tweet
MUKHBIIR SNAPSHOT

ADVERTISEMENT
This page was tagged for
mukhbir 2 movie
Mukhbiir hindi movie
Mukhbiir reviews
release date
Sammir Dattani, Sunil Shetty
Follow @fullhyderabad
Follow fullhyd.com on
About Hyderabad
The Hyderabad Community
Improve fullhyd.com
More
Our Other Local Guides
Our other sites
© Copyright 1999-2009 LRR Technologies (Hyderabad), Pvt Ltd. All rights reserved. fullhyd, fullhyderabad, Welcome To The Neighbourhood are trademarks of LRR Technologies (Hyderabad) Pvt Ltd. The textual, graphic, audio and audiovisual material in this site is protected by copyright law. You may not copy, distribute, or use this material except as necessary for your personal, non-commercial use. Any trademarks are the properties of their respective owners. More on Hyderabad, India. Jobs in Hyderabad.