Dumb And Dumber To Review 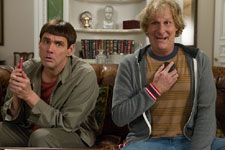 Nupur Barua / fullhyd.com
EDITOR RATING
4.0
Performances
Script
Music/Soundtrack
Visuals
6.0
3.0
5.0
5.0
Suggestions
Can watch again
No
Good for kids
No
Good for dates
No
Wait for OTT
No
As Sade so ominously sang all those years ago, it's never as good as the first time - a fact of life that some people ignore. Recreating magic in the box office is very tough, especially when you decide to present a sequel to a once-cult movie, two decades after the original. The Farrelly Brothers suddenly wanted to tell us what Harry and Lloyd have been up to all these years, but they did not try hard enough to first find out if we were interested.

As with the first movie, this one, too, is all about gags and the havoc that the two friends, Lloyd (Jim Carrey) and Harry (Jeff Daniels), leave behind in their wake, without ever realising it. Lloyd has been in a psychiatric ward for 20 years, ever since the end of his tragic romance. Harry has been a faithful friend all this time, visiting him regularly. However, Harry has a kidney condition, and he needs to get it fixed immediately. Upon hearing this, Lloyd comes out of his psychotic trance and is discharged, and he embarks on the kidney quest with his best friend.

Harry's parents cannot help with the kidney, because they are not his genetic parents. They give him something else - all the letters that were sent to him after he left the house. And in that pile of correspondence, he discovers that an old flame was pregnant with his child, all those years ago. Harry and Lloyd rush to meet with this ex-girlfriend, Fraida (Kathleen Turner), and she tells them that she had given up her daughter for adoption back then.

Harry now wants to meet his daughter, Penny (Rachel Melvin), in the hope that she may donate him a kidney. Lloyd, who is turned on by the photograph that Fraida has of Penny, tags along. They borrow Fraida's business vehicle, a hearse. Once they locate Penny's adoptive parents, Adele (Laurie Holden) and Bernard (Steve Tom), they find out that they have to go to El Paso, where Penny has gone for a convention. Adele asks them to deliver a package to Penny. And the madness begins.

Like in the first movie, there is a cross-country road trip, a package to be delivered, villainy obvious to everybody else but these two, some more villains baying for their blood, the two friends causing unintentional but serious harm to those who actually deserve it, plenty of misogyny, some racism, and a bucketful of gags that require immense patience to understand. The screenplay seems very convoluted, and it probably is, because the jokes are the plot points, you see. Each gag leads into a new scenario, and thus does the movie progress.

Some of the humour is side-splitting. Lloyd and Harry are so dumb, however, that you may find yourself getting impatient with what seems to be a predictable script. The twist in the end is tasteless, as are most of the quips. Some dialogues are downright offensive to the world at large. What made Lloyd and Harry such iconic figures in the 1990s is irrelevant. They are just not relevant to the times we live in now. They are not even very likeable, especially Lloyd and his creepy behaviour with Penny.

Jim Carrey can still contort his face in a manner that will make you squirm. That, of course, is his greatest talent. He cannot help it. He is older now, though, and you would expect a more dignified comedian. Jeff Daniels, on the other hand, is plain dull. To put together these otherwise fabulous actors, in their 50s, in a movie that gives them atrocious hairstyles, ridiculous clothes and inane dialogues, and makes them behave so abominably, is unfair to them. Not surprisingly, both actors had reservations about reprising their roles.

Rachel Melvin is a delight in this mess, and makes a mark. Kathleen Turner deserves better. Laurie Holden and Steve Tom are typecast, in a way. Some cameos are unexpected - Bill Murray, Mama June and Cam Neely.

The production and costume design departments did not try too hard to make this a contemporary movie, and at times you feel like you are stuck in the previous one. The less said about the make-up, the better. The camera work is irritating, and the editing could have been much, much crisper.

Even if you are a huge fan of the 1994 movie, this is not a sequel you would want to catch. We suggest you revisit Dumb And Dumber instead (and while you are at it, check out Ace Ventura and The Mask as well).
Share. Save. Connect.
Tweet
DUMB AND DUMBER TO SNAPSHOT 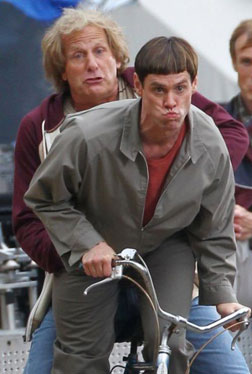 ADVERTISEMENT
This page was tagged for
Dumb And Dumber To english movie
Dumb And Dumber To reviews
release date
Jim Carrey, Jeff Daniels
theatres list
Follow @fullhyderabad
Follow fullhyd.com on
About Hyderabad
The Hyderabad Community
Improve fullhyd.com
More
Our Other Local Guides
Our other sites
© Copyright 1999-2009 LRR Technologies (Hyderabad), Pvt Ltd. All rights reserved. fullhyd, fullhyderabad, Welcome To The Neighbourhood are trademarks of LRR Technologies (Hyderabad) Pvt Ltd. The textual, graphic, audio and audiovisual material in this site is protected by copyright law. You may not copy, distribute, or use this material except as necessary for your personal, non-commercial use. Any trademarks are the properties of their respective owners. More on Hyderabad, India. Jobs in Hyderabad.