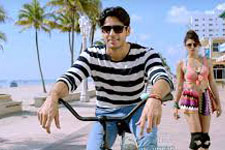 T J Reddy / fullhyd.com
EDITOR RATING
4.0
Performances
Script
Music/Soundtrack
Visuals
6.0
3.0
4.0
5.0
Suggestions
Can watch again
No
Good for kids
No
Good for dates
Yes
Wait for OTT
Yes
Happy Ganesha Chaturthi to all the lovely readers of fullhyd! Kem cho? How are the festivities coming along? Did you good folk wake up early in the morning, take a warm bath, get dressed in some new duds, turn your home into a shrine with an idol of Ganesha and share some sweets with family and friends? Happy days, eh? My day was quite the same, but with one small detour - I had to visit my nearest multiplex and indulge in my weekly ritual of watching a film first thing every Friday morning, Ganesha Chaturthi or otherwise.

This week's film is Fox Star's newest offering after the underwhelming Phillauri - A Gentleman.

A Gentleman's plot revolves around the mild-mannered, obsessively spic-and-span Gaurav Kapoor (Siddharth Malhotra) and his attempts at wooing a "free-spirited" Kavya (Jacqueline Fernandez). The man has his life set to his auto-tuned liking with a perfect house, a white-collar job and a cosy minivan, with the only thing missing being a blushing bride to grace the passenger's seat. While this paint-by-numbers romance of a tightly-wound guy and hot girl unfolds, we have a twist in the tale.

An underwear, hair gel and trendy backpack endorsing hitman named Rishi (Malhotra Part Deux) enters the fray. Rishi, a conflicted soul, yearns for the simple life he could never have owing to his much more action-packed existence, and chooses to opt out of his current state of affairs. After an altercation with his boss whose only known nomenclature is Colonel (Sunil Shetty), Rishi is subject to a double cross. Here, the filmmakers hope we care about and are invested in Gaurav and Rishi enough to ask if the both of them get the life they want, and pester us with the question as to how the two men are connected.

When you are a human who consumes films to a near unhealthy degree, you start to wonder if you've lost that feral joy you felt when watching your first film. Now, with every single shot, scene, move and angle, you can't help but observe where each of them was derived from. With most movies now, everything feels like a copy of a copy of a copy. The fight to keep yourself objective with every new film-viewing experience is very real lest you come off like an absolute tool when writing about it.

So when I found myself watching this Siddharth Malhotra vehicle, I found myself chuckling at a few lines, enjoying the beautiful locales of Miami, and appreciating the eye candy that is the lead duo of the film. Raj and DK are quite the promising duo of directors with their previous works Shor In The City and Go Goa Gone being well and truly enjoyable. The ingredients required to make an enjoyable fare at the cinemas are there, so how do we end up with such a derivative, characterless and wholly forgettable affair?

Siddharth Malhotra's effervescent smile and smooth presence can only do so much of the heavy-lifting, as with every passing minute the film bombards the audience with one reductive scene after another - from suggesting that a world-weary, mellow guy would choose to spend his life with a complete brat of a woman (I seriously want someone to give me a reason to be with Kavya apart from the fact that she's hot) to taking the breathtaking cinematic spectacles of the Mission Impossible films and the ludicrous bulls**t of the Fast And Furious films and hideously concocting them to form a bunch of scenes with are cut to death to hide their stupidity. The film deserves props for not blowing its load too soon with its cleverly veiled twist, but that is the only needle of pure quality-storytelling hidden beneath the haystack of hackneyed narration.

A redeeming feature are the visuals. Raj and DK take a page out of the Edgar Wright playbook of adroit editing as they attempt to infuse a tepid story with a certain degree of kinetic energy by using a distinct visual template. There is a whole host of humour to be derived with the imagery, which could easily lead you to ask why this same wit and creativity are curiously missing from the page. And there are a number of exquisitely conjured shots which convey a sense of where the story is headed. However, just as soon as you are ready to congratulate the film for its minimal use of exposition, it cheapens itself with a minute-long dump of forced exposition.

On par with the film's slick visuals is the "sundar" and "susheel" Siddharth Malhotra. In this pseudo-spoof of Bollywood action films, the leading man plays the comedic elements to a tee. However, his many turns as the action star leave something to be desired. The man has a great handle on performing compactly choreographed hand-to-hand fight scenes, but his face is yet to fully convey the nuances of a tortured soul. And the lesser said about Fernandez and Shetty the better as any tirade over their being converted to caricatures instead of characters would lead this review to a dark place.

The film deserves praise for not having a sickening number of unnecessary songs, but it is still bland score.

As the movie continued to bounce around endlessly on a veritable pinball machine of quality, my patience and desire to keep a clear mind played that game of pinball with it, with my brain having a battle with itself at picking the right moment to stop worrying and drop the ball. And as with the feeling the good old pinball game that came bundled from Windows 98 to Windows XP induced in me, this film would have been a consummate game changer if I saw it in my more innocent times. While I enjoy the nostalgic appeal of pinball, I play Triple-A games now, and the former is in no way going to measure up to that magnitude of quality of the latter.
Share. Save. Connect.
Tweet
A GENTLEMAN SNAPSHOT 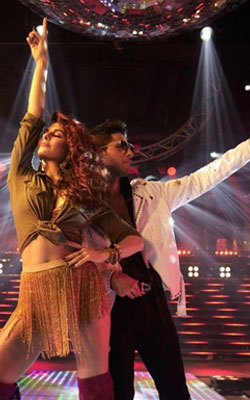 ADVERTISEMENT
This page was tagged for
A Gentleman hindi movie
A Gentleman reviews
release date
Siddharth Malhotra, Jacqueline Fernandez
theatres list
Follow @fullhyderabad
Follow fullhyd.com on
About Hyderabad
The Hyderabad Community
Improve fullhyd.com
More
Our Other Local Guides
Our other sites
© Copyright 1999-2009 LRR Technologies (Hyderabad), Pvt Ltd. All rights reserved. fullhyd, fullhyderabad, Welcome To The Neighbourhood are trademarks of LRR Technologies (Hyderabad) Pvt Ltd. The textual, graphic, audio and audiovisual material in this site is protected by copyright law. You may not copy, distribute, or use this material except as necessary for your personal, non-commercial use. Any trademarks are the properties of their respective owners. More on Hyderabad, India. Jobs in Hyderabad.