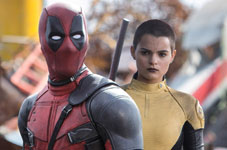 We get it - your kid loves superheroes, and has been going gaga about Deadpool for a while now. She has been incredibly sweet to you in a while just to be able to watch this film. You heard the movie is good, too (and it is). And you feel your child has already seen A-rated Indian movies without being scarred, and a Hollywood superhero movie won't hurt much. Just listen to us - don't!

Deadpool is best watched by yourself without juvenile company. As Deadpool himself says in the movie - this isn't that kind of superhero movie. Unhesitatingly profane and gleefully irreverent, this is like nothing you've seen before in the Superhero genre. Deadpool isn't the noble, good-looking (Ryan Reynolds is good-looking but Deadpool isn't - you'll see why in the movie), always composed, smooth-talking kind of superhero you are used to. Cheeky, crass, qualmlessly murderous, he is what one can call an ...anti-superhero.

Plot-wise, it Deadpool is an extremely standard revenge-based Superhero origins story. Wade Wilson (Ryan Reynolds) is an erstwhile special forces operative with 41 confirmed kills. He turns mercenary and generally stands up for the small people - e. g. getting rid of stalkers for young women (yeah, so he is a good guy - just not the kinda guy you'd introduce to your mother). He falls in love with a prostitute, Vanessa Carlysle (a gorgeous Morena Baccarin), and seems to be having a pretty sweet life until cancer strikes.

The desperate situation leads him to try out a mutant program which could possibly cure him of cancer and hand him super powers, too. The glitch is that the program is plain bald-faced torture run by a maniac called Francis Ajax (Ed Skrein). Wilson does come out alive from the ordeal but he's scarred for life, and finds that he can't go back to his life (or his love), and thus, in his new avatar as Deadpool, decides to exact revenge on Francis.

The plot may be found wanting novelty, but the treatment compensates more than adequately. Tim Miller (the director), and Rhett Reese & Paul Wernick (the writers) give their man-child so much style and sass, you can't help being overwhelmed by the superb attitude that Deadpool exudes throughout the film. The film's most defining moment might be the one where Francis Ajax talks of his mutation torture camp in this way: "One thing that never survives this place is a sense of humour." To which (a strapped to the stretcher) Wade Wilson responds, "Oh, we'll see about that, Posh Spice."

The filmmaking isn't trying to break new ground unlike Nolan or Whedon. It is very content with making an entertaining film and making it well. Particularly, the romance between Vanessa and Wade is etched out in a matter of minutes. And it works so well! At the end of the two-minute montage, you're convinced that they both love each other, and what's more, you're really hoping they grow old together.

The true USP of the film, however, is its utter irreverence. It breaks the fourth wall at the drop of a hat, pokes fun at its parent franchise (the X-Men jokes are phenomenal), throws around expletives like they were glitter in a gay parade, and gladly takes digs at Hollywood studios. In the splendid title sequence, the producers are called Asshats, the director is called an Overpaid Tool, and the writers are called the Actual Heroes (we approvingly nodded).

Practically everyone who knew anything about Deadpool knew it was going to be a lot of fun. It is good. But is it so good that you'll look back to it in a year's time? That is hard to say. But while it's fresh in the cinemas, you might not want to put it off. Get someone to babysit the kids, and go enjoy yourself.
Share. Save. Connect.
Tweet
DEADPOOL (2016) SNAPSHOT 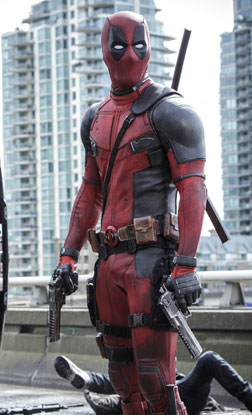 ADVERTISEMENT
This page was tagged for
Deadpool (2016) english movie
Deadpool (2016) reviews
release date
Ryan Reynolds, Morena Baccarin
theatres list
Follow @fullhyderabad
Follow fullhyd.com on
About Hyderabad
The Hyderabad Community
Improve fullhyd.com
More
Our Other Local Guides
Our other sites
© Copyright 1999-2009 LRR Technologies (Hyderabad), Pvt Ltd. All rights reserved. fullhyd, fullhyderabad, Welcome To The Neighbourhood are trademarks of LRR Technologies (Hyderabad) Pvt Ltd. The textual, graphic, audio and audiovisual material in this site is protected by copyright law. You may not copy, distribute, or use this material except as necessary for your personal, non-commercial use. Any trademarks are the properties of their respective owners. More on Hyderabad, India. Jobs in Hyderabad.