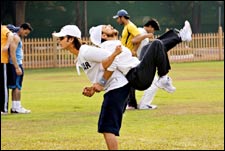 Samrat Sharma / fullhyd.com
EDITOR RATING
4.0
Performances
Script
Music/Soundtrack
Visuals
5.5
2.5
4.0
5.0
Suggestions
Can watch again
No
Good for kids
No
Good for dates
No
Wait to rent it
Yes
To be fair, I wasn't expecting much out of this one to begin with. The trailers looked pretty faked, and it's hard to look forward to an entire movie dedicated to 'comedy' by way of Rani Mukherjee talking in carefully constructed broken English. Dil Bole Hadippa does nothing to alleviate that fear, and, indeed, may be one of the worse Hindi films I have watched this year. Walking out of the cinema made me realize, though, how much director Anurag Singh doesn't like anything of much at all.

He obviously hates writing: the film has such a zero plot it's not funny. Two old friends from either side of the India-Pakistan border hold an annual match between their two villages to celebrate their friendship, and the Pakistani village wins every time. To save his face, Indian Anupam Kher calls his estranged son Rohan from England (where he is apparently a major county cricket star), to help him coach his team. When he holds trials, plucky nautanki gaffer Veera Kaur is forced to pretend to be male because - get this - the guard of the stadium mocks her.

That she goes on to win the match for the Indian side is a foregone conclusion, so the plot behaves like that's not important at all - instead moving everywhere from romantic interludes, to fall-flat-on-its-face bad slapstick comedy, to broad toilet humour and bronze breasts of various kinds. The writing is so flat that no one except for the two leads and the opposing team's captain seem to have any discernible names.

Singh also does not like anything about this film. He doesn't like cricket, for one. There isn't much of it at all in a film that's ostensibly about it, and, worse, none of the team members have any characters. That's not to say that they are one-dimensional - it's just that they are extras cast to stand around, and that's it. This means the match has no impact because you don't care who is at the crease. That's a good thing, because Singh refuses to show us any of that. Whatever cricket does come (a poorly executed opening match and the dull finale) is full of flaws, and shows utter disregard for the sport - something the dialog admonishes. I dare anyone to find a single technically sound cricket shot or bowl in the film coming from the leads.

Well, okay. He doesn't like cricket, but maybe the romance? Nope. With utter disdain for anything resembling casual romance, Singh takes the way of '80s B-grade cinema. Rohan falls for Veera when he sees her (in order) bathe naked, and fix a truck. Veera falls for him because his father asks her to. There's a forced date thrown in, where when he tells her he likes her, Veera almost faints, because, you know, village girls go out on dates with guys just for shits and giggles.

Singh doesn't care much for India-Pakistan relations either, making a complete mockery of cross-border feelings, literally implying that they would like nothing better than to be reunited. The fact that the Pakistan captain is an utter b*****d is you know for tension. Singh couldn't care less about Punjab, either - where he set his film. The language is worse than the Delhi accent, leave alone be a close approximation of the real deal. There's a song that implies the people are defined by dancing, sleeping, beer and meat, and there's an annoying repetition of Ik Onkar throughout the film, further wanting me to ask God to smite the entire crew of the film.

But Singh's apathy doesn't end here - he doesn't like his characters, or actors for that matter. No one has anything resembling a character arc except Rani and Shahid. While this is Rani's film, and a feminist statement at that, he makes her do all the demeaning things our actresses have been doing since forever. While all the slapstick when she turns into a Sikh gentleman is flat, at least she has an old school loudness that makes her appear she's having fun. Shahid Kapur is as good as a one-note character can be, and then some. Despite all the bad lines and the cheesy scenes, he delivers believability in his role, and that is only to his credit.

What is most criminal of all, though, is that Anurag Singh ultimately doesn't like movies and the people who watch them. Despite having the amazing Sudeep Chatterjee at his disposal (he did marvelous work in Jaan-E-Mann and Chak De), there is not a single sequence, scene or even shot that carries with it a sense of cinema. The continuity is horrendous, and the editing absolutely the pits. Nothing about his craft - the background score, the shot selection, the acting, the pacing - absolutely nothing, conveys to us that there was any sort of a vision at work, or at least someone who gave a damn.

This is simply a calculation that went: Veer Zaara, Chak De and Rab Ne did good business. Let's join them together and see what we get. Despite Rohan mouthing otherwise, they didn't get their math right. For a romantic sports comedy, the romance is non-existent, the sport is ill-conceived, and the comedy only funny when Rani and Shahid are in their element (and despite, not because of, the script).

It's easy to hate this film and everything associated with it so much that you swear off watching the factory-produced pap anymore. If it wasn't for Rani's politically incorrect yet grin-inducing take as the wimpy Sikh dude, and Shahid functioning on pure charisma, I couldn't sit through it. As it is, it is hard to recommend to anyone who wants their films to be made by someone who likes anything.
Share. Save. Connect.
Tweet
DIL BOLE HADIPPA SNAPSHOT


Pros: Rani's acting
Cons: Everything else

ADVERTISEMENT
This page was tagged for
Dil Bole Hadippa hindi movie
Dil Bole Hadippa reviews
release date
Shahid Kapur, Rani Mukherjee
theatres list
Follow @fullhyderabad
Follow fullhyd.com on
About Hyderabad
The Hyderabad Community
Improve fullhyd.com
More
Our Other Local Guides
Our other sites
© Copyright 1999-2009 LRR Technologies (Hyderabad), Pvt Ltd. All rights reserved. fullhyd, fullhyderabad, Welcome To The Neighbourhood are trademarks of LRR Technologies (Hyderabad) Pvt Ltd. The textual, graphic, audio and audiovisual material in this site is protected by copyright law. You may not copy, distribute, or use this material except as necessary for your personal, non-commercial use. Any trademarks are the properties of their respective owners. More on Hyderabad, India. Jobs in Hyderabad.