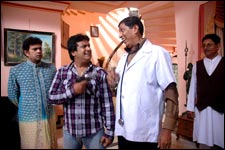 Deepa Garimella / fullhyd.com
EDITOR RATING
6.0
Performances
Script
Music/Soundtrack
Visuals
5.0
5.0
4.0
4.0
Suggestions
Can watch again
No
Good for kids
Yes
Good for dates
Yes
Wait for OTT
Yes
The key to enjoying Family Pack is to keep your humour threshold low. Once you go attuned, the movie is fun in a no-fuss kind of way. Even though there's very little by way of logic, the antics of the gang are probably cuter than before (see Gullu Dada Returns).

The plot follows a familiar track of the not-very-well-off protagonists getting caught up in a money-related spin. The film, this time, ambitiously plonks double roles into the lead - not one face being featured twice, but two of them.

In Hyderabad, Akbar and Birbal are two goof-offs who work for a tailor who makes sherwanis for royal families. The two are "tired" of their work and their employer, and want to make a quick buck. They start stealing buttons from the nawab's sherwani and selling them off to a goon Dilawar Khan.

Their look-alikes are Sultan and his sidekick, who are farmers in a village near Hyderabad. Sultan is a straightforward and upright man who wants to head to Dubai to earn some dough to get his kids a decent education.

The two pairs get mixed up at a public urinal (where else?) at a bus station, following which the sets of people who're after them end up going after the wrong jokers.

Family Pack, then, follows a pretty beaten path of mistake identities, and plays around with the predictable premise and the antics of the two lead pairs for a while. It does so pretty successfully, given its limited capacity to stretch the script.

The fun is not so much in the "twists" (that you can see coming from several miles away) but in the mildly humourous smart-aleck lines. The humour is slapstick, as usual, with the occasional genuine knee-slapper of a dialogue.

If you're not part of the series' loyal clientele, you probably won't last too long into this movie, but the jokes evidently have the repeat audience of this franchise in splits.

The Gullu Dada franchise is something you need to be hooked on to unconditionally in order for you to enjoy the flicks - as a result of the minimal production values, the pedestrian creativity and the mediocrity in performances and writing, the movies don't lend themselves to immediate appreciation. The loyalty of its repeat audiences is a reason why the makers must think of raising the bar and bring it to the level of what is actually the basic minimum out there.

On the whole, if Hyderabadi brainlessness is what you're missing on screen, you might want to catch Family Pack this season.
Share. Save. Connect.
Tweet
FAMILY PACK SNAPSHOT

ADVERTISEMENT
This page was tagged for
Gullu dada funny jokes family pack download
Family Pack hindi movie
Family Pack reviews
release date
RK
Follow @fullhyderabad
Follow fullhyd.com on
About Hyderabad
The Hyderabad Community
Improve fullhyd.com
More
Our Other Local Guides
Our other sites
© Copyright 1999-2009 LRR Technologies (Hyderabad), Pvt Ltd. All rights reserved. fullhyd, fullhyderabad, Welcome To The Neighbourhood are trademarks of LRR Technologies (Hyderabad) Pvt Ltd. The textual, graphic, audio and audiovisual material in this site is protected by copyright law. You may not copy, distribute, or use this material except as necessary for your personal, non-commercial use. Any trademarks are the properties of their respective owners. More on Hyderabad, India. Jobs in Hyderabad.