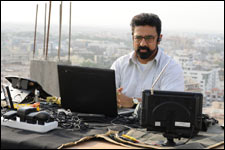 Deepa Garimella / fullhyd.com
EDITOR RATING
5.5
Performances
Script
Music/Soundtrack
Visuals
8.0
6.0
6.0
5.5
Suggestions
Can watch again
No
Good for kids
No
Good for dates
Yes
Wait to rent it
Yes
What's unfortunate is that the remake had to be made after the original, and not the other way round. And what's even more unfortunate in this case is that the thrill of even the latter gets halved if you're watching it for the second time. This is a plot-centric movie we are talking about, and Eenadu is being more than adventurous in presenting it to an audience, the multiplex section of which would already have lapped up A Wednesday.

For the uninitiated, revealing even a hint of the story would be saying too much, but here it goes. As part of a diligently hatched plan, an inconspicuous chap (Kamal Haasan) nonchalantly plants explosives in heavily crowded places, and uses the set-up to call up and make a terror threat to the Police Commissioner Eeshwar Prasad (Venkatesh).

Eenadu has retained most of A Wednesday's content, but with a few updates, one of which is a line of tribute to Hemant Karkare.Then, there are the localized places and references that make it all more relatable. A snide pot-shot at an actor-turned-politician and a gory, adults-only description about a woman's manhandling, are a few obvious tweaks to the script, and there are some more.

Eenadu is enjoyable, because of the concept that it's dealing with, and the fact that it's a true blue thriller all the way, with zero gimmicks or cheap thrills, right until the end. A sensible flick on terrorism and the common man's angst is easy to relate to any day.

But if you've seen the original, you cannot help noticing where it is wanting. Maybe the biggest hit is the sense of urgency that the original has - Eenadu even fails in setting up a powerful introductory narrative. The dialogues, too, have been slightly dumbed down. And while A Wednesday never went so close as to even hint at the protagonist's religion, Eenadu has some unsubtle references to it.

It's nice to see Kamal Haasan, Venkatesh and Lakshmi in a movie like this one, and they're at their understated best. For the younger lot, this is certainly a movie of good CV value. Some performances in the background are amateurish, though.

Kamal Haasan (using his own voice - a rare occurrence) has a role which requires less acting and a lot of timing in dialogue delivery, and this must be his unfussiest role in ages. Then, there's nothing much you can say about his performance as such - it's the usual perfect 10.

Venkatesh is comfortable in his role, one that's a disappointing departure from Anupam Kher's Commissioner in the original. Eeshwar Prasad is slightly more sulkier than Prakash Rathod, with some unnecessary stern expressions thrown in. And his being much less avuncular than the latter really serves no purpose, because he's anyway not kicking ass. That said, he does light the screen up.

Eenadu has been shot in town, with much less extravagance than a script like this really calls for. Which would have been a good thing, if huge budgets would have meant songs, comedy and other distractions. As for music, the much-hyped soundtrack is good, and adds pace to the drama.

The real path-breaker is the length of the movie - under 2 hours. That's a feat by Tollywood standards, and watching it should give you something to brag about to your grandchildren. If the movie doesn't click with you, that is.
Share. Save. Connect.
Tweet
EENADU SNAPSHOT

ADVERTISEMENT
This page was tagged for
Eenadu telugu movie
Eenadu reviews
release date
Kamal Haasan, Venkatesh
theatres list
Follow @fullhyderabad
Follow fullhyd.com on
About Hyderabad
The Hyderabad Community
Improve fullhyd.com
More
Our Other Local Guides
Our other sites
© Copyright 1999-2009 LRR Technologies (Hyderabad), Pvt Ltd. All rights reserved. fullhyd, fullhyderabad, Welcome To The Neighbourhood are trademarks of LRR Technologies (Hyderabad) Pvt Ltd. The textual, graphic, audio and audiovisual material in this site is protected by copyright law. You may not copy, distribute, or use this material except as necessary for your personal, non-commercial use. Any trademarks are the properties of their respective owners. More on Hyderabad, India. Jobs in Hyderabad.