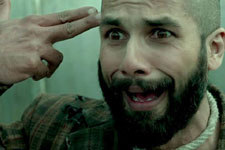 Kritika Deval / fullhyd.com
EDITOR RATING
6.5
Performances
Script
Music/Soundtrack
Visuals
8.5
6.0
7.5
8.0
Suggestions
Can watch again
No
Good for kids
Yes
Good for dates
Yes
Wait for OTT
No
Most Bollywood filmmakers don't get that a movie's backdrop is a living, breathing part of the story itself - that, for a film to be truly complete, the backdrop must have as malleable and dynamic a personality as any character. Vishal Bhardwaj, however, is not most filmmakers, and thus you have Haider, an adaptation of Shakespeare's Hamlet set in the politically volatile Kashmir of the 1990s, a setting that seems tailor-made for the rebirth of this immortal tale.

The rebirth goes thus. The year is 1995. Haider (Shahid Kapoor) has just returned to Kashmir from his university in Aligarh to find his father Dr. Hilal Meer (Narendra Jha) arrested, his home blown up, and his mother Ghazala (Tabu) in love with his uncle Khurram (Kay Kay Menon).

A volatile Haider, convinced that Khurram had something to do with his father's disappearance, is now torn between his unhealthy love for his mother, and an equally unhealthy desire to see Khurram dead as a doornail.

On paper, this seems pretty straightforward. The practice, though, is an entirely different matter. What makes Bhardwaj's adaptations of the Bard's epics remarkable is how true to them he stays. The setting is perfect because that sort of political volatility and the stark violence of beauty are the backdrop for a story as simple and complex as Hamlet grows organically in. Haider is perfect in his youthful, impetuous hotheadedness. Arshia (Shraddha Kapoor), Haider's love interest, is perfect in her delicacy. Khurram is perfect in all the various facets the story requires of him.

And Ghazala, oh my, Ghazala. Ghazala is beautiful and maddening and dangerous and alluring. Sadly for all of the other characters, they are what you see when you can bear to tear your eyes away from her.

A play orchestrated by Prince Hamlet to implicate Claudius in King Hamlet's murder, here turns into a haunting song-and-dance orchestrated by Haider to implicate Khurram in Hilal Meer's disappearance. And Hilal Meer's exit from the scene is a much more plausible arrest under suspicion of association with insurgents, which leads to Meer getting sucked into the "system" irrevocably - a daily occurrence in '90s Kashmir which put thousands of lives in limbo.

What Bhardwaj does here is organ transplant. He takes the heart of Hamlet, and builds something entirely new and yet entirely familiar around it. The result is nothing short of incredible, as long as your attention stays on the incredibly shiny and incredibly deep surface. The moment you go beyond, though, Haider stumbles.

You see, the moment you start looking beyond the perfect costumes of the cast and the deeply mesmerizing valleys and mountains and the touch on all these aspects of a camera artist who can turn his dreams into images, you will notice that Bhardwaj is too busy pointing and saying "See what I did there? Wink, wink!" to give you a coherent plot progression and a screenplay satisfying enough to sink your teeth into.

For instance, although Shraddha Kapoor does justice to her role as Arshia urf Ophelia, her own interactions with hero Kapoor seem more ornamental than essential. Her descent into madness, however, is handled masterfully.

Shahid Kapoor seems oddly underutilized in what is undoubtedly a role of a lifetime, although he does look amazing. And though Hamlet is supposed to be a brooding, volatile creature on the border of insanity, Haider's character is a bit too flighty to make sense.

Tabu, however, stays true to her role throughout, but could've toned down on the histrionics by a smidgen. Kay Kay Menon is just plain fantastic at making your skin crawl.

The screenplay stumbles and falters and meanders and wanders, leaving us feeling that the film could've been healthier with more time spent in the cutting room. We get that editing is emotionally exhausting, but, with nearly 3 hours of runtime, it should've been easier to pick out at least 20 minutes worth of superfluous moments to trim.

The visuals are stunning, and those alone are worth your time. The songs and background score by Vishal Bhardwaj become part of the narrative, and ebb and swell with the arc.

So, should you watch Haider? Oh, yes. Will you feel the compulsive desire to watch it at odd timings like with people who've watched Omkara or Maqbool? We have our doubts.
Share. Save. Connect.
Tweet
HAIDER SNAPSHOT 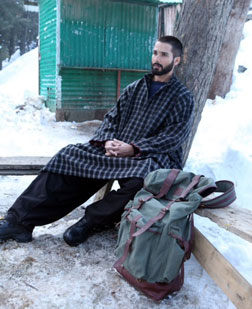 ADVERTISEMENT
This page was tagged for
Haider hindi movie
Haider reviews
release date
Shahid Kapoor, Tabu
theatres list
Follow @fullhyderabad
Follow fullhyd.com on
About Hyderabad
The Hyderabad Community
Improve fullhyd.com
More
Our Other Local Guides
Our other sites
© Copyright 1999-2009 LRR Technologies (Hyderabad), Pvt Ltd. All rights reserved. fullhyd, fullhyderabad, Welcome To The Neighbourhood are trademarks of LRR Technologies (Hyderabad) Pvt Ltd. The textual, graphic, audio and audiovisual material in this site is protected by copyright law. You may not copy, distribute, or use this material except as necessary for your personal, non-commercial use. Any trademarks are the properties of their respective owners. More on Hyderabad, India. Jobs in Hyderabad.