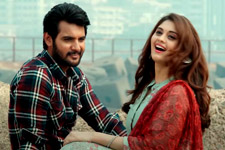 Anil Bandhakavi / fullhyd.com
EDITOR RATING
4.0
Performances
Script
Music/Soundtrack
Visuals
4.0
2.0
7.0
4.0
Suggestions
Can watch again
No
Good for kids
No
Good for dates
No
Wait for OTT
No
Sashi, written and directed by Srinivas Naidu Nadikatla, kind of seems like a story about love just for the heck of it. Like the ninth gulab jamun - you're having it to satisfy the idea of sweetness and not for the sweetness.

Rajkumar (Aadi) is a hot-tempered young man and a talented musician and singer. The reasons for his temper are quite unknown as he comes off as the one in a group of friends who's bound to bring down the mood. He drinks copiously and fights anyone who stares down an innocent girl going about her way. He's basically a virtuous man with extreme mood swings. His identity is not clear as even he looks a little lost in that regard.

Everyone in Raj's family is tired of Raj's downer attitude and his lifestyle that seems to be headed in no particular direction. They also seem to miss his virtuous side, but he doesn't really wear that on his sleeve. His older brother (Ajay) makes attempts to put him in line, but Raj does not comply.

The only person Raj is pretty close to is a man that Raj and his bandmembers call Dora (Jayaprakash), who's like a mentor. Even with Dora, Raj can sometimes be moody and aloof. Basically, if you're Raj's well-wisher, you don't get to talk to him, and he will lash out if you try to get close. Makes you wonder why he does not go off on his own - I guess you need people around you to avoid them.

Then Raj runs into Sashi, a beautiful young woman who brings about positive expressions on Raj's face which until now seemed unequipped for happiness. Raj is smiling and dancing, and all this without ever actually talking to Sashi, as though the poor man was so far just lost in the desert of sexual frustration, to the point that even the mere possibility of intimacy has him metamorphosing into a different person altogether.

But it turns out, as you will find out at the end of the first half which is entirely dedicated to just establishing Raj as an individual, that Sashi suffers from a condition in which her IQ is equivalent to that of a child. It also turns out that Raj and Sashi have history, and also that the name "Sashi" means more to Raj than just this Sashi. At this point, you will at least agree that the name Sashi is a justified choice for the film's title. Otherwise, you will be slightly confused and mostly disinterested in what is about to come.

Most of the second half is a long and drawn-out explanation for all that is revealed in the last five minutes of the first half. The crucial details, which are quite predictable to begin with, are really about two to three minutes' worth of screen time, but an entire backstory from Raj and Sashi's college days is thrown at you with a bunch of new characters, including ones played by Vennela Kishore and Viva Harsha, that suddenly turn this film into a not-so-great comedy.

It's hard to say that anyone shines in terms of performance - the performances are just about as engaging as the story. However, in spite of the lacklustre presentations on the various fronts, Arun Chiluveru delivers hit music in the form of the noteworthy songs "Okey Oka Lokam" and "Dheemthana Dheemthana", sung by Sid Sriram, who generally manages to exceed expectations, and Haricharan respectively.

Once you get to the end, you realise that Sashi is just a bunch of typical story arcs thrown into a blender. There is the jobless hero with an attitude problem, the girl who likes him but cannot have him, the girl that the hero likes but cannot have, the dad who doesn't want his daughter marrying the jobless guy, a backstory with a tragedy that explains everyone's psychological issues, and of course, the comedians who give you physical humour because they're unable to crack a good joke. Just another pointless lesson on all the obstacles that one faces in love. We say, just find the music on YouTube and make up a nice story in your own mind. 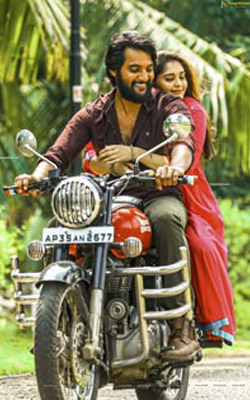 ADVERTISEMENT
This page was tagged for
Sashi telugu movie
Sashi reviews
release date
Aadi, Surbhi Puranik
theatres list
Follow @fullhyderabad
Follow fullhyd.com on
About Hyderabad
The Hyderabad Community
Improve fullhyd.com
More
Our Other Local Guides
Our other sites
© Copyright 1999-2009 LRR Technologies (Hyderabad), Pvt Ltd. All rights reserved. fullhyd, fullhyderabad, Welcome To The Neighbourhood are trademarks of LRR Technologies (Hyderabad) Pvt Ltd. The textual, graphic, audio and audiovisual material in this site is protected by copyright law. You may not copy, distribute, or use this material except as necessary for your personal, non-commercial use. Any trademarks are the properties of their respective owners. More on Hyderabad, India. Jobs in Hyderabad.