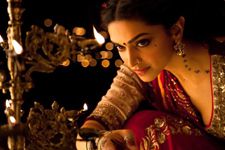 Swayamsrestha Kar / fullhyd.com
EDITOR RATING
7.0
Performances
Script
Music/Soundtrack
Visuals
7.0
6.0
8.0
7.0
Suggestions
Can watch again
Yes
Good for kids
No
Good for dates
Yes
Wait for OTT
No
There was once a bard who wrote tales about people warring, making love, giving in to jealousy, turning traitors, and most importantly, being human in some of the most universal ways possible. We now revere him, and quote him in our day-to-day language, sometimes without even knowing that it's his words we are speaking.

It is he who has given us a story of tragic love that we masochistically keep experiencing through different mediums. We know that Romeo and his achingly beautiful Juliette will never live to have kids and die a happy wizened old couple. We know that the forceful imposition of estrangement on two souls who are inextricably intertwined can only result in death.

We know all of this, and still, like the proverbial moths, we are drawn to this fieriest tale of love that was ever told.

Anyone trying to fill in the shoes of the Bard of Avon starts out knowing that the metaphorical footwear is several hundred sizes too big. Baz Luhrman, the guy who could go around with a "Keep Calm and Be Larger Than Life" T-shirt, has attempted it (with the Leonardo Di Caprio-starrer Romeo+Juliette), and has found out, by his own admission, how hard it can be to mount a Shakespearean story on the cinematic screen.

If any Indian director can match Luhrmann's penchant for aesthetic alienation through extravagance, it is Sanjay Leela Bhansali. And so we have our second official adaptation of Romeo Juliette (if you're still reeling from the shock of having had to endure Issaq, accept our sympathies) that goes by the ridiculously mouthful of a name - Goliyon Ki Rasleela Ram-Leela.

We don't really need to go into detail about the story, since nearly everyone in the world has heard of it. This time, the bard's story moves from the usual UP-Bihar-Banaras ménage a trois to the arid expanses of Rann of Kutch, Gujarat and Rajasthan.

Ram (Ranveer Singh) is from the Rabaadi clan, and Leela (Deepika Padukone) is a Sanada. Both their clans occupy the same "Bhansalized" space - a lavishly constructed rustic village, the trigger-happy residents of which trade in guns and ammunition, and the name of which we never quite catch. People are almost always dressed up in traditional Gujarati garb, and the language is replete with local accents of that area.

It is noteworthy how intensely ethnically isolated Bhansali's settings usually are (Goa-Christians in Khamoshi and Guzaarish, Gujaratis/Rajasthanis in Hum Dil De Chuke Sanaam and now Ram-Leela).

The Rabaadis and Sanadas are feuding clans, as they have been for 500 years (an extremely exaggerated tidbit). Ram meets Leela. Lust works its charm, love follows quickly, and eager to not to be the only ones left behind, heart-break and bloodshed rush in as well.

The menacing matriarch of the Sanada clan (played with an impish malevolence by Supriya Pathak) and her trusted goon-cum-aide Bhawani (a disappointingly flat Gulshan Devaiah) form one half of the couple's problems, while their own quick tempers and mercurial temperaments form the other half.

And this is where the film, which has its fair share of flaws, plays its trump card. Bhansali, along with writer duo Siddharth-Garima, has sketched out two intensely compelling characters in Ram and Leela.

Their spontaneous lust for each other (so unrestrained, so damningly feral at its core) starts off like a slow circling of a lithe young hound and a svelte ferocious lioness around each other, and quickly scales up along the fickle rungs of attraction.

By the time the interval comes, they are already helplessly ensnared in the deepest, most intoxicating kind of love; and at the same time, a sense of terrified anticipation has taken ahold of you. For you know that this story does not end well, that there is no light at the end of the tunnel.

At 2 hours and 40 minutes, with a song popping out every now and then, and some plot sequences that could have been done away with, the film seems a little too long. Some may find that the pandering to popular commercial trends - Ram's entry on a bike, the fight sequences and the unapologetic gore - can be distasteful.

But at the same time, Bhansali manages to infuse a sense of comic nihilism into it all. Especially a scene where members of the two rival clans are drunk and goofing around, baiting each other to shoot each other.

Orchestrating all this tempest and fury is some of the most exhilarating music that has come out of Bollywood this year. The cinematography is extremely well-executed; the aesthetic is pure Bhansali, but this time around, it feels less pretentious. The dialogues have abundant numbers of curse words, slangs and sexual innuendoes to make you doubt if it was Bhansali who wrote them.

Deepika Padukone is spell-binding as Leela. She is the playful ingénue at one moment, the wide-eyed girl-in-love the next, a world-weary woman in one scene, and a desperate spurned lover in the next. It's a painfully earnest performance from an actress who has been struggling with emoting for quite some time now, and while it's not the best performance of the year, or even a particularly great one, Deepika is our favourite Juliette so far.

Ranveer Singh, on the other hand, is visibly trying too hard to be impressive. He portrays the lewd playful and peace-seeking side of Ram quite well, but hams up when it comes to the more intense emotions.

Ram Leela has that pervasive... for the lack of a better word... "Bhansali"ness in all its frames. The word "excess" does not hold the same connotations for the director as it does for us. In his pursuit of perfection, Bhansali has earlier made movies that are the celluloid equivalent of the Barbie doll -all candyfloss goodness and no "real"ness. Ram-Leela does not completely escape this quagmire, but it never sinks to the bottom in terms of credibility or even creative nuance.

Go watch Ram-Leela. Although hardly perfect, it is a beautiful impassioned ode to the bard we all love, and deserves to be watched.
Share. Save. Connect.
Tweet
GOLIYON KI RASLEELA RAM-LEELA SNAPSHOT 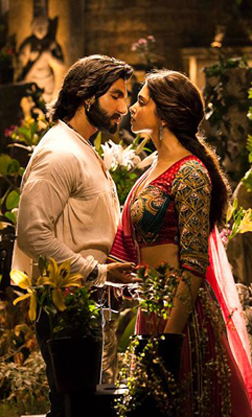 ADVERTISEMENT
This page was tagged for
ram leela movie movies
Goliyon Ki Rasleela Ram-Leela hindi movie
Goliyon Ki Rasleela Ram-Leela reviews
release date
Ranveer Singh, Deepika Padukone
Follow @fullhyderabad
Follow fullhyd.com on
About Hyderabad
The Hyderabad Community
Improve fullhyd.com
More
Our Other Local Guides
Our other sites
© Copyright 1999-2009 LRR Technologies (Hyderabad), Pvt Ltd. All rights reserved. fullhyd, fullhyderabad, Welcome To The Neighbourhood are trademarks of LRR Technologies (Hyderabad) Pvt Ltd. The textual, graphic, audio and audiovisual material in this site is protected by copyright law. You may not copy, distribute, or use this material except as necessary for your personal, non-commercial use. Any trademarks are the properties of their respective owners. More on Hyderabad, India. Jobs in Hyderabad.