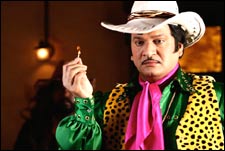 Deepa Garimella / fullhyd.com
EDITOR RATING
3.5
Performances
Script
Music/Soundtrack
Visuals
8.5
6.0
7.0
8.0
Suggestions
Can watch again
No
Good for kids
Yes
Good for dates
Yes
Wait for OTT
Yes
Blame it on the retro-dom we've been bombarded with over the past decade, in Bollywood, music videos, Rajnikanth-spoofing e-mail forwards, and the Channel [V]s and MTVs of the land. The question is, if Quick Gun Murugun were the first ever take on curd-rice-slurping heroes who beat up bartenders who crack 'non-veg' jokes in the presence of 'ladies', would it have worked?

Maybe. It's not just the issue of novelty. QGM is not side-splitting not because it's offensive or it's too much of intellectualized humour, but because it's a prototype suited to 5-minute slivers, where it has the potential to pack a punch. 97 minutes is sure better than 120, but you can't help feeling that this is like an item number that's best enjoyed as an item number, rather than as a full-length film.

Quick Gun Murugun (Rajendra Prasad) is a vegetarian cowboy who wants to thwart Rice Plate Reddy's (Nasseer) ambition of beefening the dosa and making a non-vegetarian empire. After getting killed by the latter, Quick Gun goes to heaven and down to Mumbai 25 years later, to finish his mission. Rice Plate now is the owner of a restaurant chain called McDosa, and in the search for the best A-1 Tip Top dosa on earth.

Anu Menon plays Quick Gun's love from his previous life, the 'locket lady', and Rambha plays Mango Dolly, a bar dancer who falls for him.

Well, so Quick Gun Murugun is funny, yes. The lines are well-written, the vignettes are ticklish, and the performances are good. One question is about who exactly it is hilarious to. The critics love the film because it's such a niche attempt. But cowboys aren't mainstream Indian fare, even if their bullet-bifurcation tendencies are, so the protagonist is too westernized to win local (read Hyderabadi) hearts.

There's also that irreverent generalization of south-Indian languages - Rice Plate Reddy arbitrarily breaks into Telugu, and half a sentence later, he's back to Tamil. There's anyway a lot of Tamil in the movie - the subtitles help with the dialogues, but the flavour's entirely unmistakably Madrasi - and it's delicious only to people who'll see this as a generic spoof and not as a grammatically incorrect essay.

Also, the situations, the action scenes and the burlesque are entirely old-world. How long has it been since you last saw a blonde fat cabaret dancer? Or, for that matter, a cabaret dancer? Like we said, it's not that the humour is offensive - it's just ineffective, to a large section of people.

Rajendra Prasad is one piece of home you can happily cling to in the movie, and so is Nasseer, to some extent. It's a pleasure to see these two actors let their hair down - the former is brilliant with his mock-melodrama, and the latter simply foams over with his unapologetically over-the-top role. Rambha's role is quite brief, but a role it is, and Mango Dolly manages to provoke some of the most unforgettable phrases in the movie - like "public lady". In fact, what bubbles through the buffoonery is the fun the entire cast and crew seem to have had.

The sets are brilliantly constructed, with nitpicky attention to detail. Some well-conceptualized scenes include the Quick Gun's duel in the traffic jam, and the dosa sampling sequences. The little touches are quite delightful, actually. The soundtrack mixes Western and Indian music, and is pretty innovative.

QGM is strictly for the multiplex crowd, and if you're someone who's had an aperture-sized view of severely B-grade south-Indian cinema and think you've seen it all, you're in for a blast. As for the rest of us, here's one thing we're sure we'd like to order - one Rice Plate With Seema Kheema.
Share. Save. Connect.
Tweet
QUICK GUN MURUGUN (HINDI) SNAPSHOT

ADVERTISEMENT
This page was tagged for
Quick Gun Murugun (Hindi) hindi movie
Quick Gun Murugun (Hindi) reviews
release date
Dr. Rajendra Prasad, Nasseer
theatres list
Follow @fullhyderabad
Follow fullhyd.com on
About Hyderabad
The Hyderabad Community
Improve fullhyd.com
More
Our Other Local Guides
Our other sites
© Copyright 1999-2009 LRR Technologies (Hyderabad), Pvt Ltd. All rights reserved. fullhyd, fullhyderabad, Welcome To The Neighbourhood are trademarks of LRR Technologies (Hyderabad) Pvt Ltd. The textual, graphic, audio and audiovisual material in this site is protected by copyright law. You may not copy, distribute, or use this material except as necessary for your personal, non-commercial use. Any trademarks are the properties of their respective owners. More on Hyderabad, India. Jobs in Hyderabad.