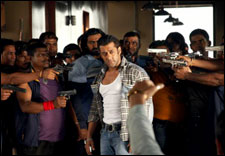 Deepa Garimella / fullhyd.com
EDITOR RATING
5.0
Performances
Script
Music/Soundtrack
Visuals
7.0
5.0
6.0
7.5
Suggestions
Can watch again
No
Good for kids
No
Good for dates
Yes
Wait to rent it
No
If there's anything to beat the bliss of knowing you're invincible, it's the wicked titillation of watching lesser others struggle at what you did in order to make it there. And while Mahesh and Puri Jagannath are perhaps beyond such gleefully malevolence, the same can't be said of the rest of us in Telugu-land.

Wanted walked into hostile territory the moment it released here in the land of the canonized original. And what you have here is a product that would make the whole of AP let out a collective snigger of disdain. If ever there was reason to celebrate Tollywood's pot-boilers even more, it is right now, because all Wanted has is a lot of tomato ketchup all over, and none of the sauciness of its original.

There's nothing in Wanted that you've not seen in the original - like with any remake by Prabhudeva (such as Shankardada Zindabad), the movie looks like it's just been basically translated. So the film is the story of Radhe (Salman Khan), an efficient, ruthless, street-smart hitman who flits between rival gangs and cares only for how many bundles of greens he's receiving in return, with no scruples or loyalty.

He also has a little love story to get him by in his spare time - one which starts when he runs into Jahnvi (Ayesha Takia), an aerobics teacher. Mahesh Manjrekar plays the gutkha-spitting cop Talpade who dedicatedly lusts after Jahnvi and harasses her family. And then, there's the underworld mastermind Gani Bhai (Prakash Raj, who repeats his Pokiri act) who's taken a liking to Radhe.

If you set aside that jaundiced eye for a moment or two, there are a few things Wanted has going for it, and they are Salman Khan, Salman Khan and Salman Khan - his fights, his dances (with some neat steps, after ages), and several other ingredients of his stardom. And for those who've come to watch him do his thing, yes, he does take off his shirt, though you'd have to wait till the end. Prakash Raj's darkly comic villainy is good as well, and sometimes, so are the imported dialogues.

For the most part, though, Wanted is deflated. And the portrayal of the hero plays a good role in that. While Pandu was a uniformly laconic roughneck whose brevity and subtlety added to his aura and starkness, Radhe vacillates between tomfoolery (like the way he reacts at the sight of Jahnavi practising aerobics) and dignity, and that strips many potentially powerful scenes of their intensity - they were written for Pandu, not Radhe.

Secondly, the villains are a lot less menacing here - Prakash Raj's introduction leaves a lot to be desired, and Manjrekar is not a patch on Ashish Vidyarthi. Actually all the characters have been fuzzed around the edges.

Then, Pokiri's romance was almost an aphrodisiac, with Mahesh Babu's wry aloofness working most of the magic. With Prabhudeva stripping the hero of his defining characteristics, the love story looks like a pointless attempt at comedy. There's hare-brained buffoonery, and some innuendo, and Ayesha Takia is too plain-Jane to match up to Salman Khan in the heat and popularity department (Ileana was - is - as hot as Mahesh Babu).

Plus, the comedy track centred around the heroine's landlord falls flat. And wherever the translation is not 100%, the dialogues suck - almost every line in Pokiri rocked, and they contributed in the largest measure to its success. Finally, the scale of violence in Wanted has seen few precedents in recent Bollywood, and may not find many takers in its softened and atrophied audiences.

As for the performances, Khan is his usual self. Manjrekar does as he's directed, and cannot really evoke loathing the way Vidyarthi did. With the exception of the animated Prakash Raj, Vinod Khanna and Govind Namdeo, most other actors are lacklustre, both in dialogue delivery and acting skills.

The music is unremarkable, and Dil Leke is the only good pick among the songs. A few dance numbers here and there hardly rivet your attention during the time you'd prefer to spend at the washroom.

The production values are good, and the budget shows. Most settings are bound to be familiar to the Telugu audiences.

Wanted is likely to be a waste of time for a non-Salman-worshipper. For the believers, there's enough of him in it, and more. And they're probably not ones who bother about such things as a socially-acceptable wardrobe, anyway.
Share. Save. Connect.
Tweet
WANTED SNAPSHOT

ADVERTISEMENT
This page was tagged for
Wanted hindi movie
Wanted reviews
release date
Salman Khan, Ayesha Takia
theatres list
Follow @fullhyderabad
Follow fullhyd.com on
About Hyderabad
The Hyderabad Community
Improve fullhyd.com
More
Our Other Local Guides
Our other sites
© Copyright 1999-2009 LRR Technologies (Hyderabad), Pvt Ltd. All rights reserved. fullhyd, fullhyderabad, Welcome To The Neighbourhood are trademarks of LRR Technologies (Hyderabad) Pvt Ltd. The textual, graphic, audio and audiovisual material in this site is protected by copyright law. You may not copy, distribute, or use this material except as necessary for your personal, non-commercial use. Any trademarks are the properties of their respective owners. More on Hyderabad, India. Jobs in Hyderabad.