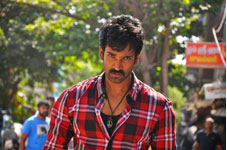 Josh / fullhyd.com
EDITOR RATING
6.0
Performances
Script
Music/Soundtrack
Visuals
7.0
6.0
6.0
8.0
Suggestions
Can watch again
No
Good for kids
No
Good for dates
Yes
Wait for OTT
No
A maze where the path from the start to finish is a straight line with little challenge is a bad maze. A good maze involves a tangled, convoluted path where you run into a number of dead-ends, and sometimes even circles, before you figure out the quite apparent but not-so-obvious route to the end. A troublesome maze, however, is one which throws in all the dead-ends and circles until you are told there is a concealed trapdoor which gives you a straight tunnel to the finish. You feel silly for having even tried.

Malupu is a troublesome thriller. It appears to be conceived as the final reveal being conceptualized first, and then the script constructed with a number of sub-plots, twists and red herrings solely to keep you occupied until it is time for the denouement.

Due to the nature of the story-telling which insists on keeping things concealed most of the time, we can't give away much of the plot. The movie, however, begins with three scared young fellows individually holed up in various secret locations. Meanwhile, SaGa (short for Satish Ganapathi - played by Aadhi Pinisetty) is in Mumbai acquiring a gun and on his way to see Mumbai's most dreaded don Mudaliar (Mithun Chakraborty stealing his frames). Next thing you know, Mudaliar is shot (but survives), and his followers throng his place in support to their leader. After this setup, the three young men in hiding are revealed to be SaGa's friends (he narrates this to us), and the film steps into a flashback.

Now we can see what the problem with the film is. It is obviously a thriller, but it spends the rest of the first half on rather irrelevant material. The friendship between the four men (they are the kind who tear up examination hall-tickets so they can stay in college for another semester). The romance (with Nikki Galrani in an atypical heroine role). The shaky relationship with the parents (Naren is awesome, and Pragati is good but a bit screechy). Wait, were we calling this a thriller a little while back?

The thriller spends quite some time being a romance, a comedy, a family drama, and even a mass film - Aadhi conveniently transforms from ordinary college youngster to wire-fu stuntman coolly thrashing goons who look like they drink raw eggs to hydrate themselves. The good news is these sub-plots (while they do feel out of place) are all handled very well, making the film watchable despite seeming to lose out on the big picture.

Yes, Malupu is pretty deftly handled. Satya Prabhas Pinisetty (the director - also Aadhi's brother) shows a flair for direction. A girl who's asked if the ruffian in front of her was the one who harrassed her earlier, is too afraid to respond with a yes. Her fingers quake, she avoids eye-contact (she's looking at his fingers which are making threatening gestures), her toes recede within her footwear, and sweat's brimming at the brow. The deliverer of justice - a bigger goon - takes that for a yes, and, well, delivers justice.

The film also demonstrates interesting writing choices. For instance, the heroine (Nikki Galrani), in her introduction scene, takes the hero on a ride on her Royal Enfield to buy two beers and a pack of condoms (she makes a mental calculation and asks for a ten-pack).

The visuals are sometimes extraordinary, too. The blurred out bustling crowd of Mumbai is captured with an unmoving light bulb in the foreground. Time lapse photography of burning incense sticks in a mosque is used to create atmosphere. That, with a pacy background score (Prasan Praveen Shyam), and skillful editing (Sabu Joseph) builds a tense tone which is mandatory for a thriller to make an impact.

This kind of detail, the careful work in all the frames, and the well-executed effectiveness of each subplot and twist make you forgive the fact that these subplots are actually ill-fitting. Thinking in maze terms - you realise that the dead-ends and circles are eyewash when the actual path is a secret tunnel. But when they are wonderfully detailed, carefully crafted, and continually manage to give you a sense of excitement, you perhaps wouldn't mind spending that time on them.

Despite its flaws, then, Malupu is a decent bet this weekend. Especially given the other choices you have.
Share. Save. Connect.
Tweet
MALUPU SNAPSHOT 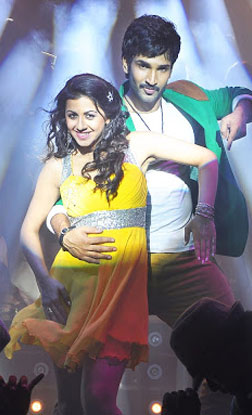 ADVERTISEMENT
This page was tagged for
malupu movie beer scene
Malupu telugu movie
Malupu reviews
release date
Aadhi Pinisetty, Nikki Galrani
Follow @fullhyderabad
Follow fullhyd.com on
About Hyderabad
The Hyderabad Community
Improve fullhyd.com
More
Our Other Local Guides
Our other sites
© Copyright 1999-2009 LRR Technologies (Hyderabad), Pvt Ltd. All rights reserved. fullhyd, fullhyderabad, Welcome To The Neighbourhood are trademarks of LRR Technologies (Hyderabad) Pvt Ltd. The textual, graphic, audio and audiovisual material in this site is protected by copyright law. You may not copy, distribute, or use this material except as necessary for your personal, non-commercial use. Any trademarks are the properties of their respective owners. More on Hyderabad, India. Jobs in Hyderabad.