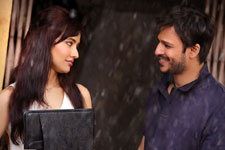 Nupur Barua / fullhyd.com
EDITOR RATING
5.0
Performances
Script
Music/Soundtrack
Visuals
6.0
4.0
6.0
6.0
Suggestions
Can watch again
Yes
Good for kids
No
Good for dates
Yes
Wait for OTT
No
Romcoms are the order of the day now. Every new director wants to ideally begin with a love story that is light and fun, just like the various mushy movies that Hollywood churns out regularly. And while the debuting movie may not do wonders at the box office, there will always be a section of the youth that will buy a ticket to watch it.

Especially if it releases just after Valentine's Day. With romance in the air, and Vivek Oberoi still playing cute-boy-next-door characters, Jayantabhai Ki Luv Story may just become a popular romantic comedy this year.

Jayantabhai (Vivek Oberoi) is a gangster, or rather, a Bhai. His "bhaigiri" is the stuff that small-time legends are made of. In short, he is dangerous. Enter Simran (Neha Sharma), the girl who left her hometown because she is ambitious and wants to make it big in Mumbai. Jayantabhai does not know what to make of his new neighbour, and Simran is equally curious about this man-child next door.

Opposites attract, and after a series of not-so-funny scenes, obstacles, play-acting and some romance, the two are in love. Now the real problem: which "self-respecting" woman would go out with a criminal? And which "self-respecting" gangster would not help the woman he is in love with? One of them has to 'turn' (to borrow from popular teen vampire romances), and accept the other's ideals and morals.

The villain coming into the scene just when everything seems to be peachy does not help. And yes, there is the girl's father to contend with.

As far as stories go, this is a straightforward and conventional one. The director has shown considerable maturity in the way certain scenes are handled. The tricky part is the screenplay, which, in this case, reeks of overindulgence and lack of structure. The one-liners and situations in the first half may get you to smile, at most, but the second half drags so much that you may just find yourself snoring.

It is apparent that the lead role was written for Vivek Oberoi. He brings in his experiences from Saathiya, Company and Shootout At Lokhandwala in an attempt to mix menacing thug with loverboy in a convincing manner. Unfortunately, despite the sincerity (and the Munnabhai-type dialogue delivery), he can only be one, and he is a better bhai than a Romeo. He shows flashes of extreme confidence and talent, but his character is rather sketchy.

Neha Sharma is irritating, period. She is unconventionally pretty, and sure of herself, so her screen presence is not the problem. Maybe her character was not clearly defined, and she had to rely on her understanding of a "spirited young girl" to play this role - whatever the reason, she is not the ideal Simran to Vivek Oberoi's Jayantabhai. The chemistry between the two appears in small flashes, but is not sustained.

The other actors are unnecessary in this movie, which can be forgiven, given that it is a pretty love story with no intense moments. Nasser as the main villain, however, should have been given more screen time. His act as the one threat in the whole movie should have been enhanced and maybe explained. Just when you begin to cower in fright, he disappears.

This is not Sachin-Jigar's best work, but the songs are welcome distractions. Atif Aslam makes a special appearance in one of the videos. The cinematography is not much to write home about, and neither are the costumes. The production design is, for lack of a better word, filmy, very filmy, and works for the movie.

Jayantabhai Ki Luv Story is no Love Actually or even Jab We Met, but it may just be a good way to kill the post-Valentine blues this weekend. Just remember that you may find yourself sleeping with your mouth open, and that may be embarrassing for your date. It is a movie made for college students, who may just accept it as "the movie of the season", for lack of better romcoms.
Share. Save. Connect.
Tweet
JAYANTABHAI KI LUV STORY SNAPSHOT 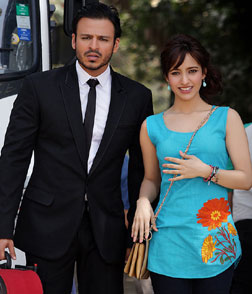 ADVERTISEMENT
This page was tagged for
jayantabhai ki love story movie
the jayanta bhai ki luv story movie in hindi
jayanta bhai ki luv story man dubbed
jayantabhai ki love story hindi movie
jayantabhai ki luv story full movie
Follow @fullhyderabad
Follow fullhyd.com on
About Hyderabad
The Hyderabad Community
Improve fullhyd.com
More
Our Other Local Guides
Our other sites
© Copyright 1999-2009 LRR Technologies (Hyderabad), Pvt Ltd. All rights reserved. fullhyd, fullhyderabad, Welcome To The Neighbourhood are trademarks of LRR Technologies (Hyderabad) Pvt Ltd. The textual, graphic, audio and audiovisual material in this site is protected by copyright law. You may not copy, distribute, or use this material except as necessary for your personal, non-commercial use. Any trademarks are the properties of their respective owners. More on Hyderabad, India. Jobs in Hyderabad.