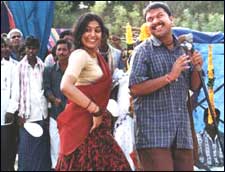 Mithun Verma / fullhyd.com
EDITOR RATING
6.0
Performances
Script
Music/Soundtrack
Visuals
NA
NA
NA
NA
Suggestions
Can watch again
NA
Good for kids
NA
Good for dates
NA
Wait to rent it
NA
Kukuku kukuku koyila raagam... swoons Seenu (RP Patnaik), his song wading purposefully through the pure neighborhood of his village. The seamless joy in his song drowns the glaring fact that Seenu's smile can never reach his eyes. There's just endless darkness in them. Maybe that's what makes his world more beautiful than ours. And he goes through everyday as if nothing was wrong.

A shuddering realization jolts you after seeing Seenu going through his chores - the world isn't too bad a place to live in, after all. RP Patnaik can act. It is obvious that he has spent a lot of time studying and practicing the mannerisms of these differently abled people. We don't see Patnaik in the role - we see Seenu.

Seenu has a tough time ducking hurtful remarks spewed at him from his dad, Nuthan Prasad, who, as the bickering old man, has shown what character acting is all about. Seenu does the best he can in providing the family with whatever he earns as a traveling singer, but the offensive old man never holds back on his cursing. Add to this old man, a drunkard elder brother, and we're sure this one's going to be an obstinate sob story, but it's not.

It turns out that Patnaik, getting too involved in his role, forgot that people can still see other areas of his acting skills, like his ability to express utter despair etc. We're not too proud of our sight after seeing that, even though it brought out the expression of utter despair very clearly... on us!

Talking about faces, two very pretty faces keep Seenu alive - Vasanti and Laxmi. Vasanti is Seenu's sister, and Laxmi, his vocally-challenged girl friend. The three of them have been chums since childhood, and the chemistry they portray is reflective of that. Laxmi looks like one of those inert gases - highly non-reactive. All she does is to try blending in with all the decent performances around her, give up and feel proud that at least she's not dumb-looking. While Vasanthi is all bubbly and effervescent, Seenu is the catalyst.

This chemical bonding, however, proves as being unstable with the arrival of Prakash Raj. Prakash Raj is the two-faced village political leader, who, while appearing to be the village's savior, is crucifying it from underneath. He promises sight for Seenu, on the same hand, forces Laxmi and Vasanthi to do physical favors to one of his beneficiaries. And he threatens to kill Seenu, if either Vasanthi or Laxmi should speak of this ghastly episode with anyone.

Laxmi and Vasanthi forcibly gulp down their bitter anguish for the sake of Seenu. But Vasanthi is forced again to do the spiteful deed by Prakash Raj. However, Laxmi is left alone. She's already torturing herself figuring out which expression goes for which emotion. But this time, Vasanthi takes her life and a fairly unexpected climax unfolds.

Seenu's rambles across the village, and the warmth the villagers show towards him render the life to the movie. The tender moments were really handled well by the director. Music is par decent - would easily go into one of RP's best works.

Where the movie loses out is in its indecisiveness to venture either fully into commercial cinema or fully into art cinema. The movie tries to slip through doing one of those dangling balancing acts, eventually taking the fall - it is too slow to be a proper commercial film while has too many key mistakes to be called an art movie.

Overall, a partly well made movie with some heart-warming moments on offer. But you're sure going to miss the flamboyance of a hero and his rector-scale thigh slapping ritual.
Share. Save. Connect.
Tweet
SEENU VASANTHI LAXMI SNAPSHOT

ADVERTISEMENT
This page was tagged for
Telugu songa.com seenu vasanthi laxmi naa songs
Srinu vasanthi Lakshmi audio songs
thelugu srinu vasanthi Laxmi naa
srinu vasanthi laxmi naa songs
naa Srinu Vasanthi Lakshmi Telugu songs
Follow @fullhyderabad
Follow fullhyd.com on
About Hyderabad
The Hyderabad Community
Improve fullhyd.com
More
Our Other Local Guides
Our other sites
© Copyright 1999-2009 LRR Technologies (Hyderabad), Pvt Ltd. All rights reserved. fullhyd, fullhyderabad, Welcome To The Neighbourhood are trademarks of LRR Technologies (Hyderabad) Pvt Ltd. The textual, graphic, audio and audiovisual material in this site is protected by copyright law. You may not copy, distribute, or use this material except as necessary for your personal, non-commercial use. Any trademarks are the properties of their respective owners. More on Hyderabad, India. Jobs in Hyderabad.