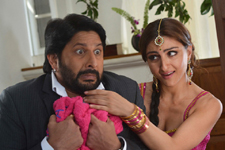 Nupur Barua / fullhyd.com
EDITOR RATING
3.0
Performances
Script
Music/Soundtrack
Visuals
5.0
3.0
5.0
4.0
Suggestions
Can watch again
No
Good for kids
No
Good for dates
No
Wait for OTT
No
Mahatma Gandhi, the Father of our Nation, reportedly said once, "If I had no sense of humour, I would have long ago committed suicide." It is never easy to make people laugh, but our filmmakers take it to another level altogether, where you not only forget that you have some humour, but you lose interest in life. What our so-called funny guys do, really, is make us miserable enough to give up movie-watching for good.

There have been a few examples of, simply put, terrible movies that have promised to make your sides ache (and they have, but for the wrong reasons), and have given you a headache instead. Joining that clique this year's first comedy, Joe B Carvalho, and while the title is a clever pun, the rest of the movie will remain a bad experience for you forever.

Joe B Carvalho (Arshad Warsi) is a private detective. The movie begins with him catching a few people red-handed, for illegally using multiple television sets with one cable connection. What he does not notice is that the same men are busy packing cocaine.

Having set the character, that of a dumb idiot who thinks he is brilliant, the story moves along to a few bizarre aspects of the world that Joe lives in. This includes his blind mother (Himani Shivpuri), who does not know she is visually impaired, and his ex-girlfriend, Shantipriya (Soha Ali Khan), who oscillates between beating up goons a la Dabangg, and wearing bikinis.

In the meantime, on some island, the large General Kopa Kabana (Snehal Dhabi) sits with his gang of criminals to figure out whom he wants to appoint as hitman to kill Gehna (Geeta Basra), the daughter of a liquor baron, for leading him on (or so he thinks) and then getting engaged to some other guy. Kopa wants the international terrorist, Carlos (Jaaved Jaaferi), to do the job. This enrages MK (Vijay Raaz), who wants the money.

Joe, during the course of his next investigation, comes across this assorted lot, and bungles up enough number of times to lead Shanti into believing that he is the wanted Carlos. She decides to do her duty by making repeated attempts to nab him, and that endeavour includes an item number.

Carlos, master of disguises, goes through memory loss and other incidents, but he is unable to kill Gehna. MK wants to kill Carlos, whose name on one's lips can lead to the person's death.

This comedy of errors, without the comedy, has the usual list of goof-ups, including mistaken identities, assumptions, double entendres (without getting too vulgar, thankfully), gravity-defying acts of courage and foolishness, and plenty of one-liners.

The situations that the characters find themselves in, and their reactions to the same, are anything but believable. For example, the reason for the Joe-Shanti breakup is so weird that it would put teenage lovers and their issues to shame.

The absence of logic is not always a bad idea in a film, but this movie also lacks story, structure, plot, screenplay, drama, tragedy, comedy, action, and (in case it has not been underlined enough) humour. Of course, the icing on the cake is the director's take on jokes on the differently-abled, including obese people. The dialogues, intended to make laugh, may make you cringe instead, with their superficiality and inanity. In fact, the movie does not belong even to the slapstick genre.

The director and writer may have thought that their choice of actors would make one overlook all other flaws (for lack of a stronger word), but all in vain. Arshad Warsi looks uncomfortable and heavyset as he goes about mouthing strange dialogues and dancing. Soha Ali Khan, despite her best effort, cannot be a convincing petite-tough girl.

Shakti Kapoor looks drugged, and so does Ranjeet. They, along with better actors like Vijay Raaz, Virendra Saxena and Vrajesh Hirjee, are wasted. Geeta Basra does nothing, along with Karishma Kotak. Himani Shivpuri and Snehal Dhabi are miscast. Jaaved Jaaferi does the best he can, by making all his disguises believable, but the lack of story lets him down.

Set somewhere in Karnataka, with various references made to Bangalore, the movie is devoid of intelligent production and costume design. The sets are garish and loud, as is the cinematography. The editor could have easily cut the movie in half, and it would have been as ineffective, but at least one would not have had to sit through the present length.

This is the movie to miss this year, so far. The fact that the revamped cult classic, Sholay 3D, will garner a larger audience does not say much about Joe B Carvalho. Skipping it is your only option.
Share. Save. Connect.
Tweet
MR. JOE B CARVALHO SNAPSHOT 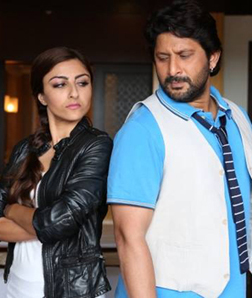 ADVERTISEMENT
This page was tagged for
Mr. Joe B Carvalho hindi movie
Mr. Joe B Carvalho reviews
release date
Arshad Warsi, Jaaved Jaaferi
theatres list
Follow @fullhyderabad
Follow fullhyd.com on
About Hyderabad
The Hyderabad Community
Improve fullhyd.com
More
Our Other Local Guides
Our other sites
© Copyright 1999-2009 LRR Technologies (Hyderabad), Pvt Ltd. All rights reserved. fullhyd, fullhyderabad, Welcome To The Neighbourhood are trademarks of LRR Technologies (Hyderabad) Pvt Ltd. The textual, graphic, audio and audiovisual material in this site is protected by copyright law. You may not copy, distribute, or use this material except as necessary for your personal, non-commercial use. Any trademarks are the properties of their respective owners. More on Hyderabad, India. Jobs in Hyderabad.