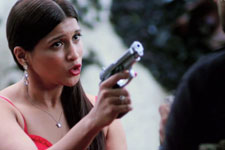 Nupur Barua / fullhyd.com
EDITOR RATING
3.0
Performances
Script
Music/Soundtrack
Visuals
4.0
3.0
5.0
5.0
Suggestions
Can watch again
No
Good for kids
No
Good for dates
Yes
Wait for OTT
No
Another Friday, another thriller. This one, as the title suggests, has something to do with being stubborn, and the lengths one obsessive person will go to in an effort to attain his or her desire.

Rohan (Karanvir Sharma) is a crime reporter for a newspaper named The Daily. He is based in Goa. His life has not been going too well recently, and his girlfriend Priya (Shraddha Das), also a reporter, has dumped him, and is now abroad. Rohan decides to start his life anew, and his first step is to rent an outhouse that belongs to Maya (Mannara) and her father.

Maya is immediately besotted with Rohan. Initially he is not interested, but as time goes by, he feels the need for a rebound affair. They indulge in casual flirting - at least that is what he thinks. What he does not understand is that Maya is pretty serious.

One drunken night, when the two of them are driving home, they lose control of their vehicle and hit a woman who is riding a scooter. Scared, Rohan and Maya decide not to tell anybody about this hit-and-run. It becomes an uneasy secret that they have to share.

Imagine their shock when they discover that the woman died not because of the accident, but because somebody strangled her. And imagine Rohan's additional shock when he realises that the victim is actually Priya's step-sister.

To make matters worse, Priya herself arrives to investigate this case. And Maya, once she figures out that there is a history between Priya and Rohan, goes berserk.

You have read enough thrillers and/or watched enough movies to understand where this is headed. The scorned, obsessive woman, and the distracted hero who finally comes to his senses - all the elements that will make you go "I already know this story" the minute the film begins. There must be something very compelling about this kind of tale because filmmakers feel the need to present their versions of it over and over again.

Predictability is the worst curse upon a movie. You wish they would hurry up and get to the point. The narrative then gets tedious to sit through, whether you have high speed shots or songs in exotic locales. Rohan may evoke some sympathy in patches, but there is no other character that can hold your interest long enough for you to invest in them. Maya, for one, is plain silly, even when she is being all mysterious. The only distraction in the movie is the paranormal angle, but that, too, loses steam very quickly.

As for the love story - well - it can leave you a bit confused. The actions and reactions of the lovers in this triangle are quite unconventional, and without reason. You lose patience with them, too.

There is nothing intriguing in the story, and the climax, despite its twist and deliberate attempt to shock, will leave you cold. If you are still in the theatre, that is. The direction is lacklustre, and the script does not really help. And if you know all of this, and want to go just for the "hot" scenes, be warned that they take place only in the songs. You may as well watch them on television.

Of course, the actors cannot be let off too easily when a movie fails to evoke any emotions in its audience. Karanvir Sharma is the only sincere one here, but he lacks consistency. His character is at the heart of all the incidents that occur, but it gets too much for the actor to handle. On the other hand, Mohan Kapoor, who plays his boss, is a welcome relief.

Shraddha Das is not sure what her role entails, and she cannot hold your interest for too long. Mannara Chopra, who is related to Priyanka and Parineeti Chopra, is way out of her depth here. It is unfortunate that she has a lineage to live up to, but her role does not require her to do much other than behaving crazy, and even that she cannot pull off convincingly. She will remind you of Parineeti, though, with her looks (but not the acting - not at all).

Since Zid is a thriller with a touch of the supernatural, everything is dark and gloomy. The lighting is so depressing that it gives Gotham City a run for its money. So, full marks to the cinematographer for that, if that was indeed the intention of the movie. The production and costume designs offer a bit of variety here and there, but do not stand out enough to distract you from the poor screenplay. The music is pleasant, and the editing is effective (and it is not the editor's fault that you become impatient within the first 15 minutes of the movie).

Zid is yet another budget thriller that will lose its steam (if any) by the time the next Friday comes along. The cast and crew may have added another movie to their resumes, but they will be the only ones to remember it after some time. Revisit some Hollywood slasher movies on DVD instead this weekend.
Share. Save. Connect.
Tweet
ZID SNAPSHOT 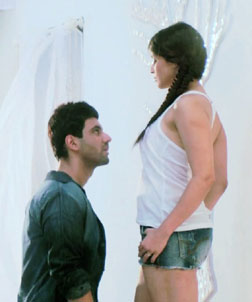 ADVERTISEMENT
This page was tagged for
Zid hindi movie
Zid reviews
release date
Karanvir Sharma, Mannara Chopra (Barbie Handa)
theatres list
Follow @fullhyderabad
Follow fullhyd.com on
About Hyderabad
The Hyderabad Community
Improve fullhyd.com
More
Our Other Local Guides
Our other sites
© Copyright 1999-2009 LRR Technologies (Hyderabad), Pvt Ltd. All rights reserved. fullhyd, fullhyderabad, Welcome To The Neighbourhood are trademarks of LRR Technologies (Hyderabad) Pvt Ltd. The textual, graphic, audio and audiovisual material in this site is protected by copyright law. You may not copy, distribute, or use this material except as necessary for your personal, non-commercial use. Any trademarks are the properties of their respective owners. More on Hyderabad, India. Jobs in Hyderabad.