The Legend Of Bhagat Singh Review 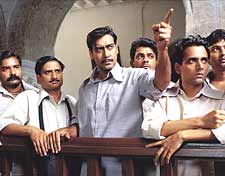 Rising above the blatant crowd, director Raj Kumar Santoshi crafts an awe-inspiring recreation of Bhagat Singh in the late 1930s in The Legend of Bhagat Singh. Santoshi strikes a terrific balance of epic scale and emotional urgency. I simply cannot begin to describe the number of things in this movie that made the hair on my hand stand on end, right till the end.

The film opens with Gandhi being grilled by Bhagat Singh's supporters for being responsible for the latter's death. When Gandhi tries to rationalize his viewpoint, one of the irate Bhagat Singh supporters says, "Itihaas aapse yeh sawaal hamesha karega." Did somebody say "itihaas"? Okay, Zap!... 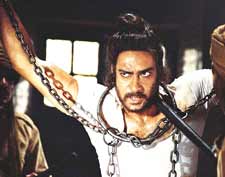 Bhagat Singh (Ajay Devgan) is a teenager infuriated by British brutality in Jalian Wala Bagh. ...Zap!... He joins the HRA (Hindustan Republican Association), with the help of a professor in National College. Inquilab Zindabad. ...Zap!... Bhagat Singh is arrested and tortured by the Britishers on a false pretext of preparing bombs. ...Zap!... Bailed out by his father, Bhagat Singh calls for an All-India activist freedom fighters meeting and forms HSRA (Hindustan Socialist Republican Association). Then, enraged by the murder of Lala Lajpatrai, he puts a British officer to death and brilliantly gets away with it. ...Zap!... Bhagat Singh surrenders to the British, in hope of pursuing the revolution through the media. ...Zap!... Singh sings a lovely patriotic-to-the-core song "Sarfaroshi Ki Tamanna" to lift up the spirits of his fellow jailbirds cum freedom fighters. ...Zap!... The British execute Bhagat Singh and his companions (Sukhdev - Sushant Singh, Raj Guru - D Santosh) but not the patriotic spirit of the Indians. ...Zap!... Independence!!! 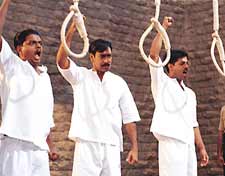 Contrary to the popular expectations, it is amazing to see Ajay Devgan as Bhagat Singh. His performance is simply top rate, although his accent at times seems to have gone with the flow. He gives a striking performance as the likeable Indian patriotic hero. D Santosh also delivers, as does the rest of the fine cast. As you would expect, the background music and scores from Rahman are splendid and touching in many a scene.

Santoshi has crafted a poignant, well-paced film that brings to life an Indian hero most of us know mainly through history lessons and books. Whether or not "The Legend of Bhagat Singh" is historically accurate in detail is not really important. That it convey a sense of time, place and importance is what matters, and that it does. 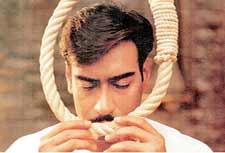 What is also important to remember is that when a movie is as well made as this one, it not only entertains, but educates as well; there is inspiration here that may well become the impetus that leads one to other sources for factual accounts of the revolutionary war led by Bhagat Singh. This is the importance of good movies, and it's all a part of the magic of the cinema.

"The Legend of Bhagat Singh" is an emotionally charged, action packed, memorable patriotic film that is at once both intimate and of epic proportions. It is artistically rendered, beautifully photographed, and well acted; I just don't think there's a whole lot more you can ask of a movie. This is absolutely one that should not be missed.
Share. Save. Connect.
Tweet
THE LEGEND OF BHAGAT... SNAPSHOT
THE LEGEND OF BHAGAT SINGH SNAPSHOT
See The Legend Of Bhagat Singh full details
THE LEGEND OF BHAGAT... USER REVIEWS
THE LEGEND OF BHAGAT SINGH USER REVIEWS
1 - 14 OF 14 COMMENTS
POSITIVE  |  NEGATIVE |  NEWEST  |  OLDEST  |  MOST HELPFUL  |  LEAST HELPFUL
USER RATING
8.5
211 USERS
Performances
Script
Music/Soundtrack
Visuals
NA
NA
NA
NA
Can watch again - NA
Good for kids - NA
Good for dates - NA
Wait to rent it - NA
Sandhya Kaur on 12th Aug 2005, 5:16pm | Permalink
THIS WAS AN EXCELLENT FILM TAT TUGGED AT MY HEART STRINGS NOT ONLIE BEACUSE OF THE STORY LINE BUT COZ OF FAB ACTING AND MUSIC!! WELL DONE AJAY DEVGAN,RAJGURU AND SUKHDEV..THEIR NAMES LIVE ON IN MY HEART..AN OUTSTANDING FILM TAT AWAKES ALL INDIANS TO REALISE THE SACRIFICES MADE FOR THEM TO LIVE IN THEIR OWN NATION WID NO EMPIRE..THX BHAGHAT,RAJGURU.SUKHDEV AND ALL THE COUNTLESS MARTYRS...
RATING
10
Ilyaz Ilu on 26th Jun 2002, 5:55pm | Permalink
Good...
RATING
10
Vice Roy on 23rd Jun 2002, 4:30am | Permalink
Nice work this time.There are lots of unsung heroes too and its time to do for them too.Thanks bollywood for such a wonderfull story.
RATING
8
Indian Hindu on 20th Jun 2002, 1:49am | Permalink
if the movie is perfect as claimed by the reviwer, then y 5 stars are not given?
RATING
10
Kamal Sagiri on 14th Jun 2002, 3:04am | Permalink
Simply one of the best patriotic movies, like Lagaan. I congratulate the director for such a superb film!
RATING
10
Kiran Ahuja on 13th Jun 2002, 5:12am | Permalink
This one is perhaps the best film made on Bhagat Singh. The film describes each event chronologically and in depth. Even a kid will understand Bhagat Singh’s ideologies and his movement to free India after watching the film.

This film begins with the dead bodies of Bhagat Singh, Sukhdev (Sushant Singh) and Rajguru being sneakily taken out of a jail and burnt. The reprehensible act creates an outrage among the public. With a flashback we are transported to the younger Bhagat Singh, who watches incidents like the Jalianwala Bagh massacre and other acts of violence by the British. When he grows up, he joins the revolutionaries and Chandra Shekhar Azad (Akhilendra). Soon he becomes the leader of the pack. When Lala Lajpat Rai is attacked by the chief of police, Scott during a lathi charge at non violence gathering and boycott of Simon Commision, Bhagat Singh is put off by the non violence philosophy of Mahatma Gandhi. He avenges the death of Rai by killing Sanders a junior officer who had attacked Rai too.

After this act Bhagat Singh is condemned by one and all as a terrorist and extremist. To make the public and the leaders aware of their viewpoint, he masters a plan. Bhagat Singh throws a grenade meant to harm no one in the Assembly Hall during a important meeting. He plans to get publicity through the press and his court case. His beliefs and ideologies are published and they spread like wild fire in the youth of the nation. His popularity matches that of Gandhi. The British find a witness to the sanders murder and sentence Bhagat Singh, Sukhdev and Rajguru to be hanged until death.

Rajkumar Santoshi has made a brilliant film, which doesn’t deviate from the facts. A R Rahman's melodious patriotic songs touch a chord in your heart. Ajay Devgan has given a performance, which will be remembered in history of Indian cinema. Sushant Singh as Sukhdev portrays his character with an honesty that will get him awards. Raj Babbar, Akhilendra as Azad are very aptly cast.

A must see film for history, for Bhagat Singh and for Ajay Devgan!


RATING
10
Vishy Zurani on 13th Jun 2002, 4:42am | Permalink
The legend is a well told tale - All the departments of movie making put in their best effort. The only fact that holds it back from being in the same league as Gandhi is that not too much is explained about the things that were happenning in the first half.

The narrative depends on the history lessons that we had as kids to understand what is happenning sometimes. (But this was only sometimes though) - Like when they show Subhash Chandra Bose - we have to decipher - becuase he looks remarkably like him - but to the younger generation - they wouldn't know.

The best part was the enthusiasm shown by the gang of freedom fighters - their friendship , their despair, their struggle came through wonderfully - full marks to santoshi for having transported the audience to a different era.

The songs are really good and the story moves ahead in the songs - I don't think the length of the movie was enough to depict all the struggles of this martyr.

The surprise package was Sushant Singh as Sukhdev - he was just great and matched one on one with Ajay Devgan. The action scenes could have been done better - that's where the movie falters.

Overall - leaves a deep impact - leaves you wondering about the times when so many people were so happy to die for the motherland - where the ideals and principles came before extreme thirst and hunger.

Leaves us wondering if maybe history had taken a different course - there would have been ONE GREAT COUNTRY instead of 3 tense neighbours.
RATING
10
Chandra Paduri on 10th Jun 2002, 11:51pm | Permalink
Excellent movie.I really don't know much about bhaghat singh before watching this movie
RATING
10
Imtiaz on 10th Jun 2002, 11:27am | Permalink
WOW!! I entered the movie theatre knowing nearly zilch about Bhagat Singh, and came out slightly more educated and alot more inspired. History may not have been very kind to Bhagat Singh, but Mr. Santoshi and Ajay Devgan have done their respective jobs with integrity and honesty. Gripping till the very end, if we could all just live by Bhagat Singh's philosophy perhaps India would find itself a much more prosperous nation. Another feather in Mr. Santoshi's cap!
RATING
10
Reena Kapoor on 9th Jun 2002, 3:39pm | Permalink
This a fantastic flim in recent times..it does have all the ingredients of a fantastic flim..this type of movies does recharge the patriotic cells in one's brains..
RATING
8
Raja Vamsi Nooti on 9th Jun 2002, 1:08pm | Permalink
Top Quality Performance! The best in recent times....
RATING
10
Ramakrishna Madhavapeddi on 9th Jun 2002, 12:29am | Permalink
I am very happy that producer chose to potray a gerear freedom fighter and pay tributes to Him instead of mere love angles/triangles.please inform if it comes in dvd or video nptc please thanks
RATING
6
Satheesh Mothukuri on 8th Jun 2002, 9:25pm | Permalink
As you decribed , its looking very interesting,
you did your part well. i i must see the movie today
to do my part ,
RATING
6
Mahee Kiran on 8th Jun 2002, 11:55am | Permalink
I really liked the way u described the movie and the compliments given to Ajay for his action. I will race to the nearest theater.
RATING
10
LEAVE A COMMENT
fullhyd.com has 700,000+ monthly visits. Tell Hyderabad what you feel about The Legend Of Bhagat Singh!
MORE MOVIES
Latest Reviews
The 355
83
83 - Telugu
Shyam Singha Roy
The Matrix Resurrections - H...
more
The Matrix Resurrections
Pushpa: The Rise - Hindi
Pushpa: The Rise
Spider-Man: No Way Home
Spider-Man: No Way Home - Hi...
Spider-Man: No Way Home - Te...
Chandigarh Kare Aashiqui
Akhanda
Satyameva Jayate 2
Ghostbusters: Afterlife
Contemporary Reviews
Vijaya Rama Raju
My Big Fat Greek Wedding
Kabaddi Kabaddi
Aanandam
Rendu Gundela Chappudu
more
Star Wars - Episode III
Panchatantram
Rangeela
Vandemataram
Indian
Sins Of The Night
Gunaah
Jaathiya Pathakam
Reign Of Fire (Hindi)
Random Reviews
Naughty Love (Number One Fan...
Kaasi
Mohra
Harry Potter And The Goblet ...
Monsoon
more
Journey To The Center Of The...
Avatar
Kudirithe Kappu Coffee
Gali Gali Chor Hai
Saheb Biwi Aur Gangster Retu...
Love Life
Lingaa (Tamil)
Rocky Handsome
Judwaa 2
Hellboy (2019) Hindi
SEARCH MOVIES
Dissatisfied with the results? Report a problem or error, or add a listing.
ADVERTISEMENT
SHOUTBOX!
{{todo.name}}
{{todo.date}}
[
ip{{todo.ip}}
]
{{ todo.summary }}... expand »
{{ todo.text }} « collapse
First  |  Prev  |   1   2  3  {{current_page-1}}  {{current_page}}  {{current_page+1}}  {{last_page-2}}  {{last_page-1}}  {{last_page}}   |  Next  |  Last
{{todos[0].name}}

ADVERTISEMENT
This page was tagged for
the legend of bhagat singh in hindi
hindi hero hyderabadi
the legend of bhagat singh hai movie downloadgolkes language:en
thelegendofbhagatsinghmoviehdvideodownload
the the legend of bhagat singh movie language:en
Follow @fullhyderabad
Follow fullhyd.com on
About Hyderabad
The Hyderabad Community
Improve fullhyd.com
More
Our Other Local Guides
Our other sites
© Copyright 1999-2009 LRR Technologies (Hyderabad), Pvt Ltd. All rights reserved. fullhyd, fullhyderabad, Welcome To The Neighbourhood are trademarks of LRR Technologies (Hyderabad) Pvt Ltd. The textual, graphic, audio and audiovisual material in this site is protected by copyright law. You may not copy, distribute, or use this material except as necessary for your personal, non-commercial use. Any trademarks are the properties of their respective owners. More on Hyderabad, India. Jobs in Hyderabad.